General Qassem Soleimani, the head of Iran‘s elite Islamic Revolutionary Guard Corps’ (IRGC’s) Quds Force, and architect of its regional security apparatus, has been killed following a US air raid at Baghdad’s international airport on Friday.

A three-day national mourning period has been declared in Iran in honour of Soleimani.

Iranian Leader Ayatollah Ali Khamenei paid tribute to him as a “martyr”, and vowed a “vigorous revenge is waiting for the criminals.”

“The US bears responsibility for all consequences of its rogue adventurism,” Zarif wrote on social media.

Iraqi officials and the state television reported that aside from Soleimani, Iraqi militia commander Abu Mahdi al-Muhandis was also killed in the pre-dawn raid.

Sources from the PMF earlier told Al Jazeera that the rockets destroyed two vehicles carrying “high-profile guests”, who had arrived at the Baghdad airport and were being escorted by militia members. Earlier reports said five other people were killed in the raid.

Al Jazeera’s Osama Bin Javaid, reporting from Baghdad, said the deaths are a significant turning point in Iraq and the entire Middle East.

He said the region has already been “on edge” since the US attack on PMF forces near Iraq’s border with Syria, and the protests at the US Embassy in Baghdad on Tuesday.

“This is a major blow on the relationship between the United States and the Iraqi government,” bin Javaid said. “It is a very precarious situation in which this significant development is taking place.”

The US bears responsibility for all consequences of its rogue adventurism.

Trump posted an image of the American flag on social media following the news of Soleimani’s death.

US Senator Lindsey Graham, an ally of Trump, said the death of Soleimani is a “major blow to Iranian regime that has American blood on its hands.”

Meanwhile, US Senator Chris Murphy, an opposition member of the Senate Foreign Relations Committee, warned that the incident could set off “a potential massive regional war”.

In an interview with Al Jazeera, former US Assistant Secretary of Defense Lawrence Korb said “there is no doubt” that the US wanted to target Soleimani “for a while”.

Korb predicted that Iran could retaliate by launching “asymmetric type of attacks” that do not risk an all-out confrontation with the US.

Hillary Mann Leverett, a former White House National Security official, said the US killing of Soleimani is a “declaration of war” on Iran.

Killing Soleimani is equivalent to the Iranians “assassinating” the US defence secretary, or the commander of the US Central Command, she added.

“The president has taken this decision without debate in Congress, without any Congressional authority, it is probably an illegal act within the US domestic context.”

In Tehran, Soleimani’s death sent shockwaves among residents, who were awake when the news was announced, according to Al Jazeera’s Dorsa Jabbari, who was reporting from the Iranian capital.

“With the news of his assassination, there is a tremendous amount of shock and anger that could follow, not only in Iran but across the Middle East,” she said.

“His name is synonymous to Iranian national pride, no matter how he has been labelled outside of the country,” Jabbari said, adding that hymns of mourning are being played on Iranian radio to mark Soleimani’s death.

Witnesses near Baghdad airport earlier told Al Jazeera that they heard sounds of sirens and helicopters in the air following the attack that killed Soleimani and al-Muhandis.

The area where the incident took place has been cordoned off, authorities told Al Jazeera, but the international airport remains in operation.

The incident took place near the base of the US-led coalition forces.

The attack occurred amid tensions with the US after an Iran-backed militia and its supporters breached the United States‘s Embassy in Baghdad.

The protests at the embassy on New Year’s Eve was in response to a deadly US air attack that killed 25 forces of the PMF, also known as the Hashd al-Shaabi group. 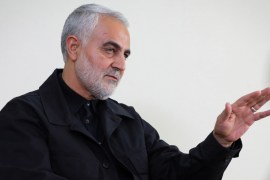 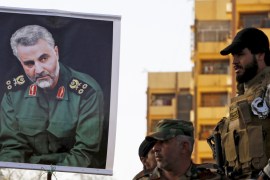 Iran general threatens Trump: ‘If you begin war, we will end it’

Special forces general tells US president war with Iran would ‘destroy all that you possess’ as war of words continues. 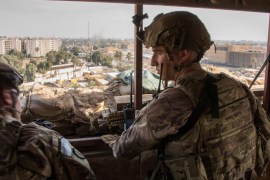 ‘Iran is not afraid’: Why Tehran dismisses US threats over Iraq

As war of words between Washington and Tehran escalates, analysts explain why the Islamic Republic will not back down.