Austria‘s conservative leader Sebastian Kurz struck a coalition deal on Wednesday with the Greens to ensure his return to power and bring the left-wing party into government for the first time, three months after Kurz won a parliamentary election.

The deal marks a swing left for Kurz, whose last coalition was with the far-right Freedom Party.

It also means Austria will join fellow European Union member states Sweden and Finland in having the Greens in government, albeit in a junior role, at a time of growing calls for urgent action on climate change.

After a final round of coalition talks on New Year’s Day and two days of leaks of new Cabinet members’ names, Kurz and his Greens counterpart said they had struck a deal, as widely expected.

They held off, however, on providing details of their plans – those will be presented to the public on Thursday.

“We have reached an agreement,” Kurz told reporters standing next to Greens leader Werner Kogler. “We succeeded in uniting the best of both worlds,” he added.

The two will become chancellor and vice-chancellor of the new government, and the Greens will control just four of 15 ministries, roughly reflecting their performance in the September 29 election.

Kurz’s People’s Party (OVP) won with 37.5 percent of the vote while the Greens came in fourth with 13.9 percent.

“It is possible to reduce the tax burden and to ecologise the tax system,” Kurz said, referring to core campaign pledges of each party and hinting at the deal’s contents.

The Greens said they wanted an investment package in environmental measures and to make products that damage the environment more expensive.

For the Greens, many of whose supporters viscerally oppose Kurz and his trademark hard line on immigration, going into government with Kurz was a trade-off between the compromises of power politics and the chance to shape policy after campaigning for rapid action on climate change.

Whether their coalition can hold for five years will depend on whether the Greens can show they have obtained concrete results in at least some key areas.

They will control a sprawling ministry covering the environment, transport, infrastructure and energy, officials say.

For Kurz, regaining the reins of power is also a chance to soften his image after 17 months in coalition with a far-right that shared his views on immigration, but was also prone to anti-Semitic and xenophobic scandals.

But immigration is likely to remain a point of friction with the left-wing Greens.

Allying with the Greens, who campaigned on “clean environment, clean politics”, is also a chance to turn the page on his association with the Freedom Party (FPO).

Their coalition collapsed in May after FPO leader Heinz-Christian Strache was caught in a video sting offering to fix state contracts. 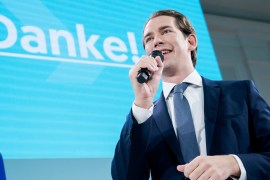 The People’s Party leader was expected to come out on top but faces difficulties forming a coalition. 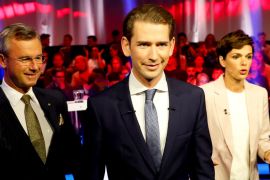 Sebastian Kurz set to return to power in Austria after ousting

The centre-right People’s Party is likely to win Sunday’s election in Austria. 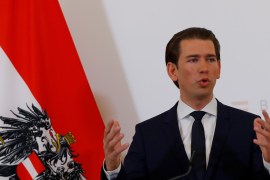 Austria appears set to head to the polls after Vice-Chancellor Heinz-Christian Strache resigns over a video sting.