Samples taken by the United Nations nuclear watchdog at a facility in Tehran showed traces of uranium that Iran has yet to explain, two unnamed diplomats told Reuters news agency, although they could not say whether the materials predated the 2015 nuclear deal, or were more recent.

The report published on Sunday said one of the diplomatic sources, however, acknowledged that the uranium traces were not highly enriched, meaning they were not purified to a level anywhere close to that needed for weapons.

The news comes as Iranian Foreign Minister Javad Zarif called on Cornel Feruta, acting chief of the International Atomic Energy Agency and his inspectors “to observe the principles of professional work, maintain confidentiality of activities, and keep doing its duties impartially”.

The IAEA is investigating the particles’ origin and has asked Iran for an explanation.

Tehran has not yet responded to the IAEA’s specific request for answers, according to the diplomats interviewed by Reuters, stoking more tensions between Washington and Tehran. Reuters did not identify the nationalities of the two diplomats.

Reuters first reported in April that the IAEA, which is policing the nuclear deal, had inspected the site – a step it had said it takes “only when necessary” – and environmental samples were taken there were sent for analysis.

United States and Israeli media have since reported that the samples turned up traces of radioactive material or matter.

Those traces were of uranium, the diplomats said – the same element Iran is enriching and one of only two fissile elements that can make the core of a nuclear bomb.

But since Iran has not yet given any to the IAEA it is hard to verify the particles’ origin, and it is also not clear whether the traces are remnants of material or activities that predate the landmark 2015 deal or more recent, the diplomats say.

“There are lots of possible explanations,” that diplomat told Reuters.

In a speech a year ago Israeli Prime Minister Benjamin Netanyahu, who vehemently opposed the nuclear deal, called on the IAEA to visit the site immediately, saying it had housed 15kg of unspecified radioactive material that had since been removed.

The IAEA did not respond to a request for comment. Iranian officials were not available to comment.

Israel’s UN ambassador, Danny Danon, said on Twitter that the IAEA had verified the Israeli version.

“The (Iranian) regime must be held to account and not given a free pass,” he tweeted.

In a live video chat on Facebook on Sunday, in the run-up to an election next week, Netanyahu was asked about the Reuters report.

“I know the issue is being handled by the IAEA. I do not intend to discuss this today. It’s very possible that I will have something to say about it tomorrow,” Netanyahu said.

The 2015 nuclear deal, which Netanyahu opposed, imposed tight restrictions on Iran’s atomic programme in exchange for sanctions relief and was based on drawing a line under Iran’s past activities.

The IAEA and US intelligence services believe Iran had a nuclear-weapons programme that it ended more than 10 years before the deal.

Iran maintains that its nuclear ambitions have always been peaceful.

Hawks such as Netanyahu, who has repeatedly accused Iran of seeking Israel’s destruction, point to Tehran’s past to argue that it can never be trusted.

The Islamic Republic’s previous secrecy might explain why uranium traces were found at a location that was never declared to the IAEA.

The IAEA takes environmental samples because they can pick up telltale particles even long after material has been removed from a site.

Uranium traces could indicate, for example, the former presence of equipment or material somehow connected to those particles.

During his meeting with Zarif in Tehran on Sunday,  Feruta the interim UN nuclear watchdog chief, said in a statement “that these interactions (on its nuclear commitments) require full and timely cooperation by Iran.”

The US, which pulled out of the nuclear deal last year by President Donald Trump, is trying to force Iran to negotiate a more sweeping agreement, covering Tehran’s ballistic missiles and regional behaviour, than the current accord.

Iran says it will not negotiate until it is granted relief from US sanctions, which France is trying to broker.

In the meantime, Iran is breaching the deal’s restrictions on its nuclear activities step-by-step in response to what it calls US “economic warfare”.

A quarterly IAEA report issued a week ago did not mention the sample results because inspection-related matters are highly confidential. But it did say Iran’s cooperation could be better. 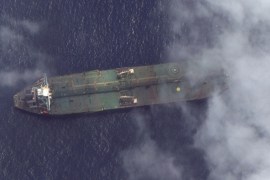 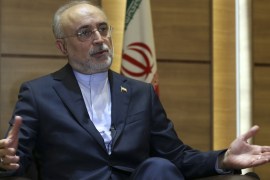 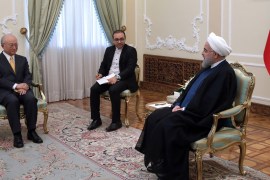 IAEA’s Yukiya Amano: Iran is living up to nuclear deal

Director General of the International Atomic Energy Agency says commitments made by Iran in 2015 are being implemented.