Kutama, Zimbabwe – A group of worshippers kneel in prayer on the lawn of the late former President Robert Mugabe‘s homestead in Kutama, a village southeast of Zimbabwe‘s capital, Harare.

The huddled semi-circle of women, some in sky-blue capes, sing hymns and say a special prayer for the 95-year-old, who died on Friday, to rest in peace as he leaves a nation divided; with some mourning a liberator and father figure, others bitter that he clung to power and many bearing the scars of the brutality of his 37-year rule that ended almost two years ago.

In Kutama, a special mass was held on Sunday in honour of Mugabe, a seemingly devoted Catholic who regularly attended services at the rural parish until a few months before his death in Singapore where he was undergoing medical treatment.

At his family homestead, preparations are now under way for the arrival of Mugabe’s body later this week after President Emmerson Mnangagwa, his successor, declared the veteran leader a national hero to be mourned until his burial. 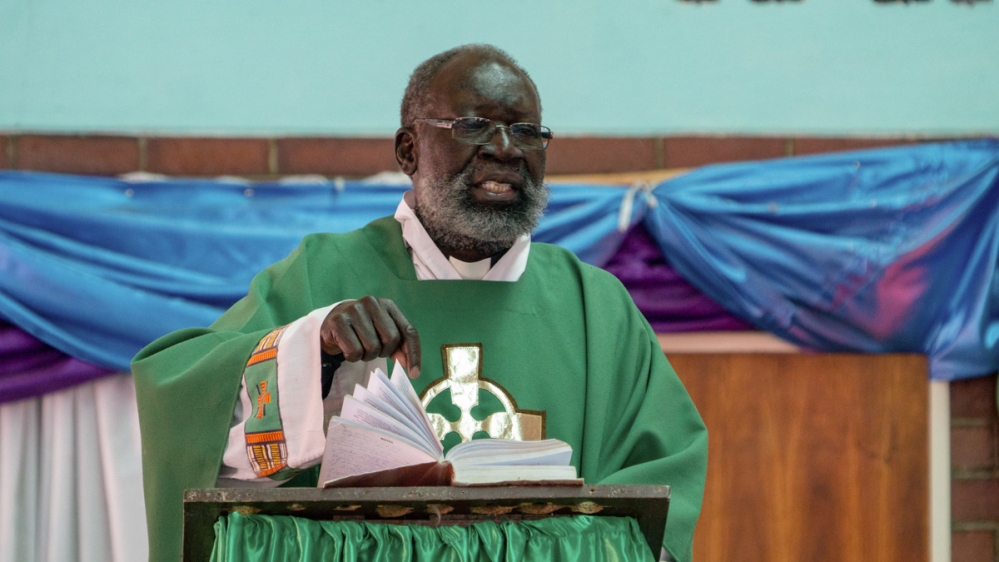 Born in Kutama in 1924 in what was then British-ruled Southern Rhodesia, Mugabe went on to campaign for Zimbabwe’s independence and spent more than a decade in prison after being arrested in 1963 by the colonial authorities for “subversive speech”.

Mugabe ruled Zimbabwe since liberation from white colonial rule in 1980 until he was overthrown in a de facto coup in 2017. One of the world’s longest-serving leaders, he died at the age of 95 with a checkered record, with many saying he was a liberator who turned oppressor.

However, his paternal cousin, Josephine Jaricha, 72, has a different story to tell.

“He lived his life fighting for this country, he would always fight no matter how much the whites would try to silence him. I never thought he’d come out of prison, but he did and he did so much for so many people,” said Jaricha, recalling how she used to take regular train rides to visit Mugabe during his imprisonment.

“A time would come when God would take him just like he took Sabina, Bridget and Donato [Mugabe’s siblings],” she added.

“I’m thankful for what he did for us as family and in Kutama, but it’s a painful loss; he was a father to us. This country will never have another leader like him, we’ve really lost someone important.”

Some villagers had personal encounters and knew him personally; they speak of Mugabe, an oppressor feared by many, as a man who looked after his people.

Many homes in the rural settlement have electricity and running water, an uncommon sight in Zimbabwe where, according to the World Bank, just over 40 percent of the total population of 14 million have access to electricity.

“I cried when I heard that Mugabe had died, he was a good man,” said Locardia Sande, 84, who was a former neighbour to Mugabe and a friend of his late mother, Bona.

“We were one people. Before our villages were relocated, we used to fetch water from the same well with his [first] wife, Sally and his sisters,” she added.

“There’s no person who was as nice as Robert, now we’re suffering without him,” she lamented, adding that many in Kutama were facing tough times since the end of Mugabe’s reign.

“Whenever he’d come here, we’d tell him our problems and every family would receive something like cooking oil, but now we don’t get much help, not even a packet of sugar, we’re really suffering here,” she lamented.

Jaricha said she was thankful for Mugabe’s support, but added that after a long life and painful final months spent mostly in hospital beds and wheelchairs, Mugabe had to rest.

Mugabe was forced to resign after a military intervention in November 2017 and was succeeded by Mnangagwa, his former ally and deputy.

After nearly four decades in power, Mugabe was accused of using political patronage to win the support of the rural majority while brutal state-backed operations were meted out against opposition parties.

Shortly after independence, at least 20,000 people in southwest Zimbabwe were killed during Gukurahundi, a military operation launched in 1983 on the premise that the Zimbabwe African People’s Union (ZAPU), a liberation movement partner, was plotting to topple Mugabe’s ZANU-PF.

A peace accord was signed with ZAPU in 1987 ending the ethnic conflict, but the wounds were rekindled after Mnangagwa replaced Mugabe. At the time of Gukurahundi, Mnangagwa served as minister of state security.

But despite the continued crushing of opposing voices such as the Movement for Democratic Change, the country’s largest opposition party, some in Kutama are reluctant to speak ill of Mugabe.

Father Fredrick Mabiri, the priest who conducted the special mass at the Kutama Parish where Mugabe worshipped on visits to his rural home, told Al Jazeera he recognised the late president’s achievements, but as a priest, it was not his place to speak on Mugabe’s vices.

“I see him as a president who was focused on uplifting the quality of life of the people, there are many things he succeeded in terms of education and health, but as a human being there are other things he was failed to do in his administration, but I cannot speak on those matters,” he said.

After 42 years of being at the helm of Zanu-PF, Mugabe was removed as party leader by his comrades in 2017. The de facto coup, dubbed Operation Restore Legacy, saw Mugabe placed under military house arrest until he resigned from the presidency and Mnangagwa rose to power.

Leo Mugabe, the former president’s nephew, told the BBC his maternal uncle was “bitter” over his removal from power.

According to Jealousy Mawarire, a spokesperson for the National Patriotic Front party who worked closely with Mugabe in the post-presidency period, Mugabe’s ouster by his party cadres had a significant impact on his health.

“He was saddened by what happened in November 2017. His health deteriorated rapidly because he was unhappy about the way things went,” said Mawarire.

“It would cause a lot of discomfort to talk about that now. It’s a time for all Zimbabweans to grieve, so let’s give those who worked with him a chance to mourn.”

As the government prepares to repatriate Mugabe’s body, his birthplace is anxiously waiting to receive him with honour and dignity, in spite of the complex legacy of liberation and tyranny he bequeaths to Zimbabwe.