Teachers in Jordan have launched a nationwide strike demanding a 50 percent pay increase, following days of protests in the capital, Amman.

In a statement published on its official Facebook account on Saturday, the Jordanian Teachers’ Association (JTA) – also known as Jordan’s Teachers’ Syndicate – said the “open-ended” strike would begin on Sunday and continue until the 50 percent increment in teachers’ salaries was granted by the government.

The statement directed teachers across the country to attend official working hours but not enter classrooms or carry out official duties.

Organisers say the government has yet to deliver a 50 percent wage increase agreed upon in 2014.

The syndicate’s deputy head Nasser al-Nawasrah said the launching of the strike was also a response to the Jordanian authorities’ handling of last week’s demonstration, when thousands were prevented from marching towards Prime Minister Omar al-Razzaz’s office on Thursday by security forces.

Protesters had gathered near the government headquarters in Amman amid a heavy security presence, with reports on local media of tear gas being used to disperse the crowds, as well as scuffling with police.

One social media user posted a short video of the confrontations, which appeared to show security forces chasing and attempting to detain a protester who fell to the ground.

Teachers had gathered in different areas in central Amman, chanting anti-government slogans and calling for an open-ended sit-in.

They had called on teachers in other cities to protest at their schools if security forces prevented them from travelling to Amman to participate in the sit-in.

“Teachers will not enter classrooms unless officials are held accountable,” local media quoted al-Nawasrah as saying, ahead of the general strike.

“The government turned its back on us,” al-Nawasrah said. “Despite various attempts, we still have not met with the prime minister.” 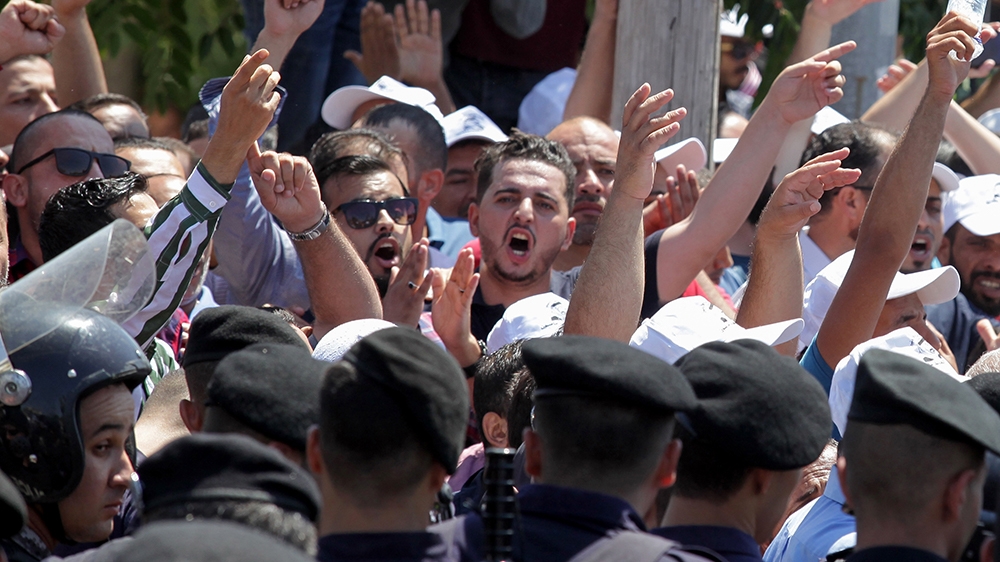 On Saturday, the government said in a statement that it was committed to dialogue with the teachers, but that classes should not be interrupted and teachers’ performance must improve.

Jordan has been facing dire economic conditions for years.

The prime minister, a former World Bank economist, was appointed by King Abdullah II last June to replace Hani al-Mulki, who resigned to defuse a crisis that saw some of the largest protests in years over planned IMF-driven austerity measures, including tax hikes.

Al-Razzaz had promised to restore public trust in a country where many blame successive governments for failing to deliver on pledges of reviving growth that is stuck at around two percent, cutting waste and curbing corruption.

But many have reiterated their dismay at the government’s handling of the country’s economic affairs, while critics say the prime minister has not taken clear steps to hold officials from previous governments accountable for corruption.