At least three people have been killed and 10 others injured after a powerful typhoon slammed into South Korea, disrupting power to 57,000 households, authorities have said.

Typhoon Lingling struck the island of Jeju and southern port cities overnight on Friday, knocking out power and damaging buildings as it moved north at 49 kilometres per hour, the Ministry of Interior and Safety said in a statement on Saturday.

In the central town of Boryeong, a 75-year-old woman was killed after strong winds blew her off her feet and crashed her into a wall, the interior and safety ministry said.

A 39-year-old was killed in the western city of Incheon after being crushed by a collapsed wall at a hospital parking lot. In the border town of Paju, a 61-year-old died after being hit by a blown-off roof tile.

More than 250 flights have been cancelled at Seoul’s Incheon International Airport and the country’s southern resort island of Jeju, according to airport authorities.

The storm was expected to pass by the capital Seoul and reach North Korea later by Saturday, a ministry official told Reuters news agency.

The centre of the typhoon is expected to pass over the North Korean capital Pyongyang, according to a tracking map by the Korea Meteorological Administration posted on its website.

“Record-breaking winds will be seen at islands, and southern and western coastal areas,” the weather agency said. 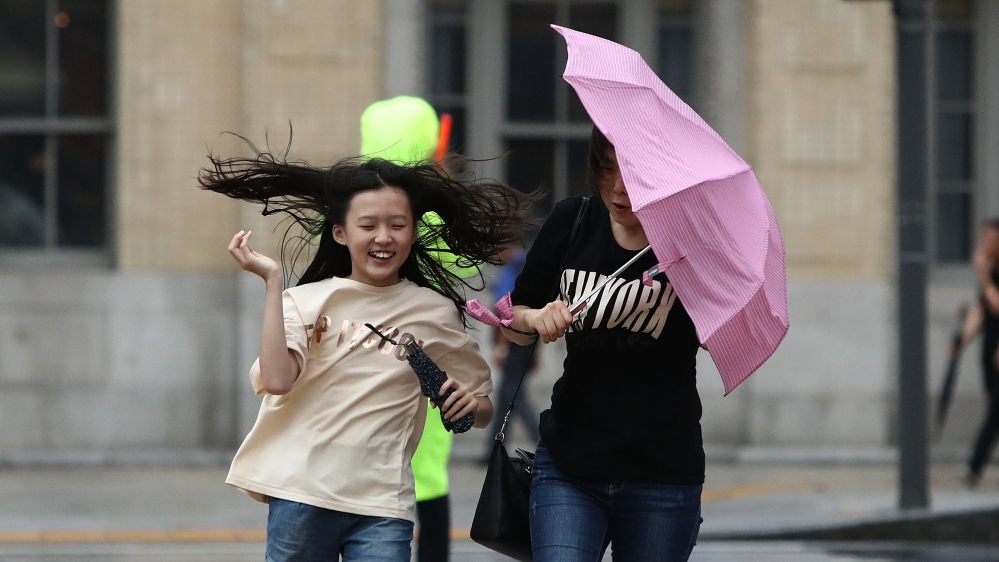 North Korea held an emergency meeting on Friday under the guidance of leader Kim Jong Un to discuss “urgent emergency measures to cope with the typhoon,” state media reported on Saturday.

Kim criticised senior officials for being “helpless against the typhoon, unaware of its seriousness and seized with easy-going sentiment,” the Korean Central News Agency (KCNA) said, adding that Kim called for full emergency measures.

KCNA said in a separate statement that government officials and the armed forces were preparing to “urgently dispatch forces to damaged areas by using various kinds of alarm and communications means, and secure relief goods and building equipment and materials and mobilise transport”.

The North, which suffers from severe food shortages, was paying “primary attention” to the protection of crops and to prevent damage in dikes, dams and reservoirs, KCNA said. It said officials were also evacuating residents in areas vulnerable to flooding and deploying “watchmen” to monitor bridges, buildings and houses.

The impoverished and isolated country is vulnerable to natural disasters, especially floods, due in part to deforestation and poor infrastructure.

At least 138 North Koreans were known to have died after torrential rain triggered major floods in 2016, the United Nations said at the time.

More than 160 people were killed by a massive rainstorm in the summer of 2012.