Millions of Afghan voters are set to elect a new leader in the fourth presidential election since the Taliban armed group was thrown out of power in a United States-led invasion in 2001.

Polls will open 7am local time (02:30 GMT) on Saturday and are scheduled to close by 3pm (12:30 GMT). Preliminary results of the election are not expected before October 19.

A presidential candidate must secure 50 percent of the vote to win outright.

In case no candidate crosses the 50 percent threshold, a runoff will be held between the top two contenders in the second round in November.

About 9.6 million voters are registered to cast their ballot to decide the fate of 15 candidates, including the incumbent, Ashraf Ghani, whose administration has been blighted by corruption allegations as well as overseeing the rising number of civilian casualties.

Earlier this month, US Secretary of State Mike Pompeo said Washington would withdraw $160m in planned infrastructure and other aid funding from Afghanistan, citing corruption and financial mismanagement by Ghani’s government. 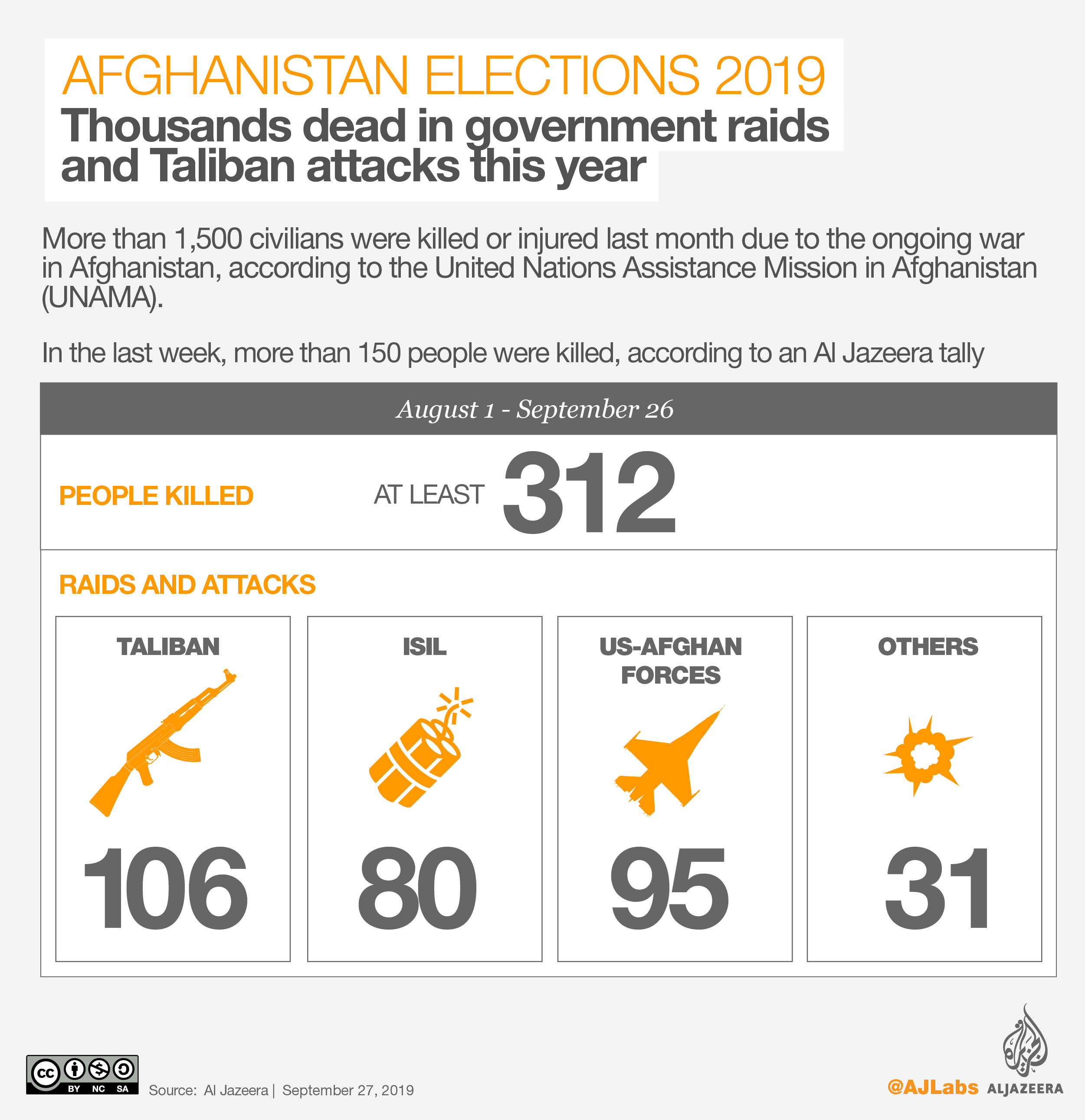 The Taliban, which has called for a boycott of what they call a “fake election process”, has carried out a string of attacks, killing hundreds of people over the last few weeks.

On September 17, the Taliban attacked Ghani’s campaign rally in Parwan, killing at least 48 civilians and wounding more than 40.

The armed group believes any engagement with the government in Kabul will grant it legitimacy and that elections will continue the US’s dominance of Afghanistan – a country of 35 million.

“As our countrymen are already aware, an American process under the name of elections is once again scheduled to take place in Afghanistan,” the Taliban statement said on Thursday.

The government has deployed more than 72,000 security personnel to guard 5,373 polling centres across the country, with security remaining a major concern.

“The lack of security is a problem. Personally, I am scared of going out on the election day, but I will go and vote anyway,” Ahmad Ali Sadat, a sales officer in the capital, told Al Jazeera.

“What else can we do? I might regret my decision for five years if I sit at home and not vote.”

Afghans will be choosing a leader who they hope will bring the Taliban to the negotiating table and make efforts to end the 18-year-long war.

The Taliban, which held a series of talks with the US until it was scrapped late last month, has long refused to speak to the West-backed Afghan government calling it a “puppet regime”.

US President Donald Trump, who wants to pull out American troops from Afghanistan, had pushed for talks with the Afghan armed group.

But in a surprise move, he cancelled the talks after an American soldier was killed in a Taliban attack earlier this month.

The two sides were on the verge of a deal that would have seen Taliban guarantee Afghan soil would not be allowed as a launchpad to conduct attacks outside the country in lieu of the complete withdrawal of US and NATO forces from the South Asian nation.

The proposed deal also called for an intra-Afghan dialogue and a permanent ceasefire.

After the talks collapsed, the Ghani administration has said peace talks with the Taliban may be considered after the elections.

Civilians appear to have little trust in the government in protecting their lives as dozens of people have been killed in attacks attributed to the US-backed Afghan forces.

“Both sides massacre us everywhere. US and Afghan forces have recently killed people in Afghanistan. I don’t trust them in providing me security, so I won’t go to the polling stations,” Mohammed, who refused to reveal his full name, told Al Jazeera.

Transparency in the electoral process

Concerns have also been raised over the lack of transparency in the electoral process. Candidates have accused President Ghani of using government resources to boost his election campaign.

There will be about 100,000 observers, including international monitors, present at the polls to check voting fraud on top of more than 200,000 election staff managing the polling stations.

Biometric voter verification devices will be used for the second time after they were introduced during the parliamentary elections last October.

Each of the 49,402 polling booths will have one biometric device and each polling centre will have one spare device in case of malfunctioning, the Independent Election Commission (IEC) said.

“The designated staff should be able to operate them sufficiently,” said Thomas Ruttig, codirector of the private Afghanistan Analysts Network in Kabul.

“There have been assurances that the training was done earlier and better than the last election so there should not be any hurdles, but we can only know that on the election day.”

The IEC said the polls in the conflict-ridden country will cost an estimated $150m, adding that the government will pay $90m, while international organisations will bear the rest of the cost.

President Ghani and Abdullah Abdullah, the chief executive, are the frontrunners. The two have shared power for the past five years after 2014 polls were marred by allegations of fraud and corruption.

“This election is vital and has a very big role in the future of Afghanistan. We have seen a lot in this war and I think it is enough,” Ismatullah Safi, a taxi driver in Kabul, told Al Jazeera.

“I think we should all go and vote for someone who will end the war in this country.” 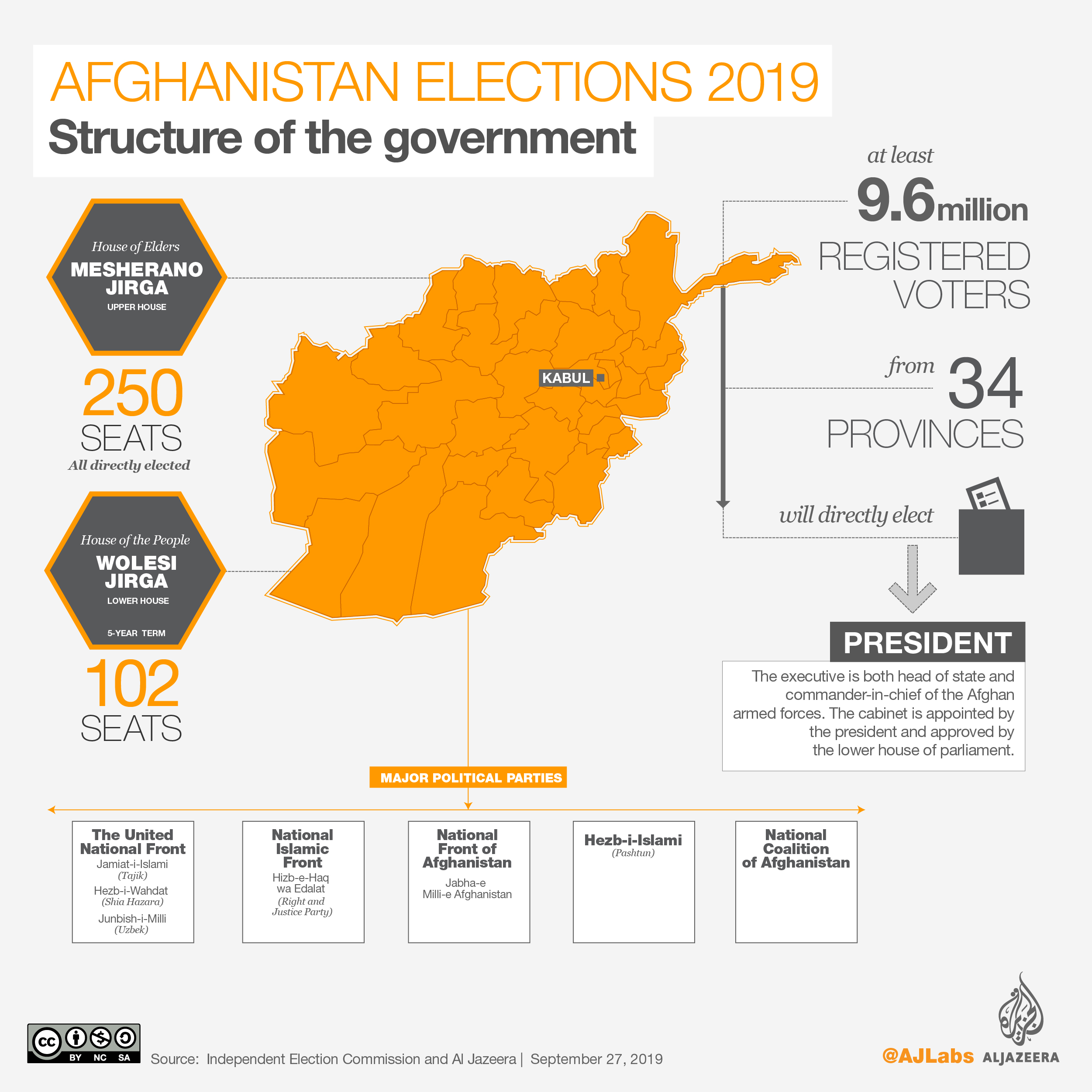