Iranian President Hassan Rouhani urged the United States on Thursday to “cease this policy of maximum pressure” in favour of “dialogue and logic and reason”.

Rouhani also challenged nations accusing Iran of being behind the September 14 attack on Saudi Arabia‘s oil facilities to produce evidence.

The US, France, Germany and the UK have all blamed Iran for the attacks on the kingdom’s Abqaiq plant and the Khurais oil field, which knocked out half of Saudi Arabia’s oil production.

“Those who make the allegations must provide the needed proof. What is your evidence?” he told reporters in New York, a day after addressing the UN General Assembly.

Enmity between Iran and the US has soared following the oil attack. Yemen-based Houthi rebels claimed responsibility but other nations say only Tehran could have been behind it.

US Secretary of State Mike Pompeo called it an “act of war”, while Iranian Foreign Minister Javad Zarif warned of “all-out war” in the event of a retaliatory attack.

Relations between Washington and Tehran have steadily deteriorated since last year’s nuclear-deal withdrawal. After pulling out of the landmark accord, the US also reimposed crippling sanctions on Iran’s oil and banking sectors in what it calls a “maximum pressure” campaign.

The US announced on Thursday it will send more troops and military equipment to Saudi Arabia in the wake of the oil attack.

Iran‘s Supreme Leader Ayatollah Ali Khamenei said on Thursday his country “should not place hope” on European countries to alleviate US sanctions, adding they “could not be trusted”.

Khamenei, speaking to a powerful clerical body, said it was unlikely efforts by the UK, France and Germany – the remaining European nations who signed the 2015 nuclear accord with Iran – will offer meaningful help when it comes to US sanctions.

“They cannot be trusted at all as they have betrayed all their commitments,” the supreme leader said in a statement on his website.

“Despite their promises, the Europeans have practically adhered to America’s sanctions and have not taken any action and are unlikely to do anything for the Islamic Republic in the future. So one should give up all hope on Europeans.”

Rouhani said the European countries have demonstrated their “inability or lack of willingness” to help Tehran.

France, Germany and the UK have tried to set up a trade mechanism to barter humanitarian and food goods with Iran. However, the mechanism, which was launched at the end of January, is still not operational.

Iran has repeatedly said it will ramp up its nuclear activities as the deal collapses.

A report released by the UN’s nuclear watchdog on Thursday said Iran committed another breach of the nuclear agreement by enriching uranium with advanced centrifuges.

In the last few weeks, Tehran has gradually scaled back its commitments, removing caps on its stockpile of enriched uranium and on the purity of its uranium stocks. On September 6, Iranian officials announced they were restarting nuclear research and development. 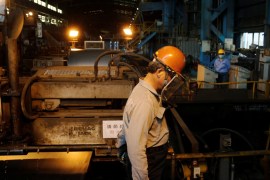 China hits back at latest US tariffs with measures on $60bn

Tit-for-tat moves are the latest escalation in an ongoing trade row between the world’s two largest economies. 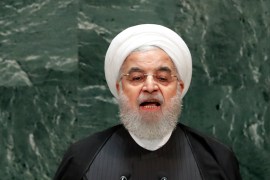