A Haitian senator trying to disperse protesters opened fire with a pistol outside parliament on Monday, injuring a photojournalist as anger rises over fuel and food shortages in the Caribbean country.

Senator Jean-Marie Ralph Fethiere, a member of Haiti‘s ruling party, stepped out of a white truck near parliament in the capital Port-au-Prince after several protesters yanked open his passenger-side door while gesturing and yelling at the senator, Reuters news agency footage showed.

Fethiere, wearing a black suit jacket and jeans, pulled out a handgun and fired several shots, sending the cluster of people around his car fleeing in all directions. He then got back inside the vehicle, which sped out of the parking lot.

“I defended myself. Legitimate defence is a sacred right,” Fethiere told local media, adding he was unaware Associated Press photographer Dieu-Nalio Chery had been injured.

Chery suffered a minor injury to his jaw from a bullet shard. He is expected to undergo treatment to remove what appeared to be a bullet fragment, Reuters reported.

International media outlets reported a security guard was also injured, but there were no details on his condition.

Prime Minister Fritz-William Michel, who was appointed at the end of July, was to appear together with his ministers in the Senate for the ratification of his general policy, an essential step to installing his government.

The Senate session was postponed indefinitely after the Monday morning incident.

Haitian President Jovenel Moise cancelled his trip to New York, where he was to participate in the United Nations General Assembly, according to a statement released on Monday evening.

He was supposed to leave on Sunday but had previously said his departure was postponed pending the installation of the government.

Earlier on Monday, several hundred protesters flooded the streets of the capital to express their frustration with Moise, setting up barricades along their path.

“We don’t want to hear about ratifying the prime minister. We don’t have a government problem but a president problem: Jovenel Moise is incompetent,” said Didier Benel as he stood among a crowd made up primarily of young men, many of whom wore masks.

“He can’t lead and, because of that, our misery is that much greater.”

The protesters smashed storefronts and car windows as they crossed the capital’s commercial neighbourhoods. At least two vehicles were set on fire, according to an AFP journalist at the scene.

At one point, demonstrators clashed with authorities outside a hotel, where members of parliament were falsely rumoured to have been meeting. A nearby store was sacked and set ablaze. 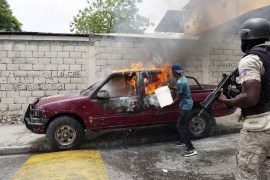 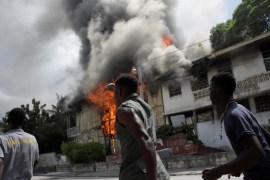 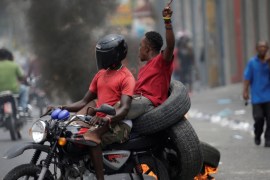 Schools, businesses and government offices are closed as protesters block roads across the capital Port-au-Prince.