The United States and Iran are set to put forward their competing visions of security in the Middle East to the United Nations General Assembly this week, with US President Donald Trump expected to address the gathering of world leaders on Tuesday and Iranian President Hassan Rouhani a day later.

As tensions continue to simmer following attacks on Saudi Arabia’s oil fields and the exchange of sharp rhetoric between Washington and Tehran, world leaders are holding out hope for diplomacy to prevail.

Iran’s president, however, kept up the war of words on Monday suggesting the Saudi oil attack was being used as a pretext because the United States wants to “conquer the [Middle East] region”.

Rouhani also denounced the US for imposing new sanctions, calling the move “desperation”.

“Americans are sanctioning institutions that have already been blacklisted. This signals America’s complete desperation and shows that its ‘maximum pressure’ has failed … as the great Iranian nation has resisted successfully,” Rouhani said in remarks carried by state television.

“The region has become intense… They make propaganda about damage [at Saudi’s oil facilities] that can be repaired in two weeks … because America wants to conquer the region,” the Iranian president said before flying to New York City to join the UN meetings.

“If Iran was behind this attack, nothing would be left of this [oil] refinery,” Zarif told reporters in New York on Monday.

Trump left open on Sunday the possibility of an unscheduled meeting with Rouhani on the sidelines of the UN General Assembly.

“Nothing is ever off the table, completely, but I have no intention of meeting with Iran and that doesn’t mean it doesn’t happen,” Trump said. “I’m a very flexible person, but we have no intention. It’s not set up.”

Zarif told CNN that Rouhani was willing to meet the US leader this week “provided that President Trump is ready to do what’s necessary” by exchanging sanctions relief for “permanent monitoring of Iranian nuclear facilities”.

“The olive branch has always been on the table, but we’re showing it again,” Zarif said.

In a televised speech on Sunday marking the anniversary of the start of the Iran-Iraq war in 1980, Rouhani said Iran was extending a “hand of friendship and brotherhood” to neighbouring countries to secure the Gulf and the Strait of Hormuz – a vital gateway for the global oil industry.

But the Iranian president also warned foreign forces to “stay away” from the region.

In an interview with the US broadcaster ABC on Sunday, US Secretary of State Mike Pompeo said Washington wants to give diplomacy “every opportunity to succeed”.

“We are working diligently to see that this has a diplomatic outcome,” he said. “But make no mistake about it, if we’re unsuccessful in that and Iran continues to strike out in this way, I am confident that President Trump will make the decisions necessary to achieve our objectives.”

The US has accused Tehran of carrying out the air attacks that set aflame Saudi Arabia’s Abqaiq plant and the Khurais oil field on September 14, knocking out half the kingdom’s oil production.

“As a diplomat both secretary Pompeo and I should try to avoid war, not to wage war,” said Zarif.

Despite initial warnings by Trump that US forces were “locked and loaded”, the US president quickly softened his rhetoric, brushing off Republican hawks who warned the absence of a forceful response would be read as weakness in Tehran.

Trump has so far ordered stepped up sanctions against Iran, and a relatively modest deployment of US troops to the Gulf.

On Fox News, Pompeo said the administration was “deeply aware of the risks” of a miscalculation given the situation in the region.

“It’s why we want to resolve this in a way that doesn’t resort to kinetic action if it’s at all possible to achieve that,” he said.

The threat of outright war is likely to make all sides cautious.

“I doubt anyone has the appetite for a direct clash between the US and Iran,” said Barbara A Leaf, who was US ambassador to the UAE from 2014-2018 and is now a senior fellow at the Washington Institute for Near East Policy.

“It really requires re-establishing deterrence. Clearly, there is none now.”

“President Trump is not reliable in the way Rouhani thinks about diplomacy,” Eslami told Al Jazeera, adding the US president is only interested in showing off that he is doing something on Iran before the 2020 elections.

Eslami also said meeting Trump would be “political suicide for any Iranian official”.

“The cultural factor and the history of Iran-US relations are the main contexts when we are writing about diplomacy. Trump does not respect the Iranian heritage and the Iranian culture,” he said. 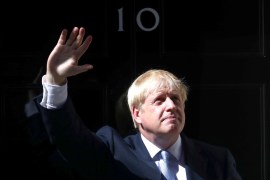 Prime minister says ‘UK is attributing responsibility with a very high degree of probability to Iran’ for Saudi attacks. 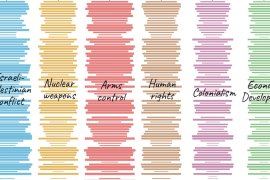 Interactive: How does your country vote at the UN?

We visualised 1.2 million votes at the UN since 1946. What do you think are the biggest issues facing the world today? 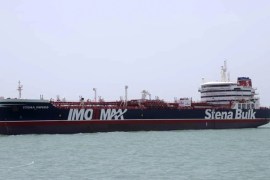 British-flagged oil tanker was seized by Iran in July amid rising tensions in the Gulf.