At least 20 people have been killed, including three shot by police, and dozens injured following a new wave of violent clashes between demonstrators and government forces in Indonesia’s West Papua region on Monday, prompting President Joko Widodo to call a security meeting.

Sixteen people were killed in Wamena city where hundreds demonstrated and burned down a government office and other buildings, authorities said.

Four of the other fatalities were from the clashes that took place on Monday in Jayapura, the provincial capital, Aloysius Giyai, head of Papua province’s health office, told the news website, Jubi.

Dedi Prasetyo, a spokesman of Indonesia’s national police, also confirmed to Al Jazeera that one police officer was killed. He could not confirm the number of fatalities among the demonstrators.

In a statement sent to the media, Lt Col Eko Daryanto, a military spokesman in Papua province, said members of the Papuan Student Alliance (AMP) gathered at the Cenderawasih University.

Authorities later ordered the protesters to move the demonstration outside of the campus, which resulted in deadly clashes.

Albertho Rumsaur, a resident of Jayapura, said he witnessed the clashes between the joint police-military forces and the students.

Siska Manam, a student, said she also saw civilian militia, who support the military, carrying wood and machetes, giving a chase to the students.

The AMP student alliance, however, denied that they have members in Jayapura, adding that they only have a local group in the restive region.

Heavy presence of security forces outside the University of Cenderawasih.

Students of this biggest university in West Papua are striking inside.

3 local journos HY, AB, BM are not permitted by security forces to go inside to report. pic.twitter.com/vMBlWsUKDL

The AMP is a leading organisation of Papua students that has called for more freedom in the region.

Jhon Gobai, chairman of the alliance, told Al Jazeera that the government should “stop scape-goating” the student group for Monday’s protests.

Indonesia’s West Papua region is divided into two provinces: West Papua and Papua. Jayapura is the biggest city in Papua province, with a population of some 500,000 people.

Several people were killed during protests in Jayapura last month when the unrest erupted.

West Papua was a Dutch colony until the early 1960s when Indonesia took control, cementing its rule with a controversial referendum.

The government in Jakarta maintains the West Papua region, which occupies the western half of the island of Papua New Guinea, is Indonesia’s because it was part of the Dutch East Indies that forms the basis of the country’s modern-day borders.

West Papua is the poorest region in the country and there have been allegations of human rights violations.

At least 17 people were killed after violence erupted in December, which triggered a military crackdown.

Some 35,000 civilians have been forced from their homes as security forces attempt to flush out the rebels from the forested mountains. 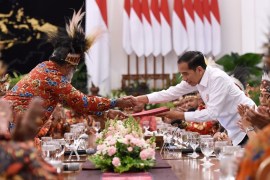 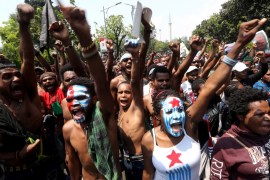 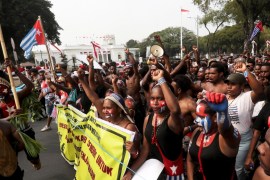