Hong Kong, China – As young people in Hong Kong went back to school, more than 1,000 secondary students joined a rally in the heart of the city, huddling under canopies and trying to stay dry despite torrential downpours.

“I can skip homework for today, but if I lose Hong Kong what’s left for me?” said Pearl Wong, 16, who arrived with four other classmates after half a day of lessons. “That’s why it’s important for me to come out to voice my support for democracy.”

All of them donned surgical masks to protect their identity, although they expected their legal and relatively small gathering would not invite a police crackdown.

On the stage, a black banner in Chinese summed up their rallying cry: “Without a future, why bother go to school?”

“Hong Kong is still free, but if I don’t stand up for my freedoms now I might regret it someday,” said Thomas Tsang, 15. “Then it’d be too late.”

Universities were also due to resume classes on Monday after the summer break, but students – who have been at the heart of the protest movement – are planning a two-week boycott.

Since early June, the campaign against the extradition bill, which opponents believe will put the independence of the territory’s justice system at risk, has morphed into a broader anti-government and pro-democracy movement including a demand for full universal suffrage, as promised in the Sino-British Joint Declaration signed in 1984, the treaty on the territory’s future under China.

The political awakening of the city’s younger generations parallels Hong Kong’s transformation from a British colony to a semi-autonomous region of China.

Over the past decade, students, even those attending primary school, have been at the forefront of successive protest movements. 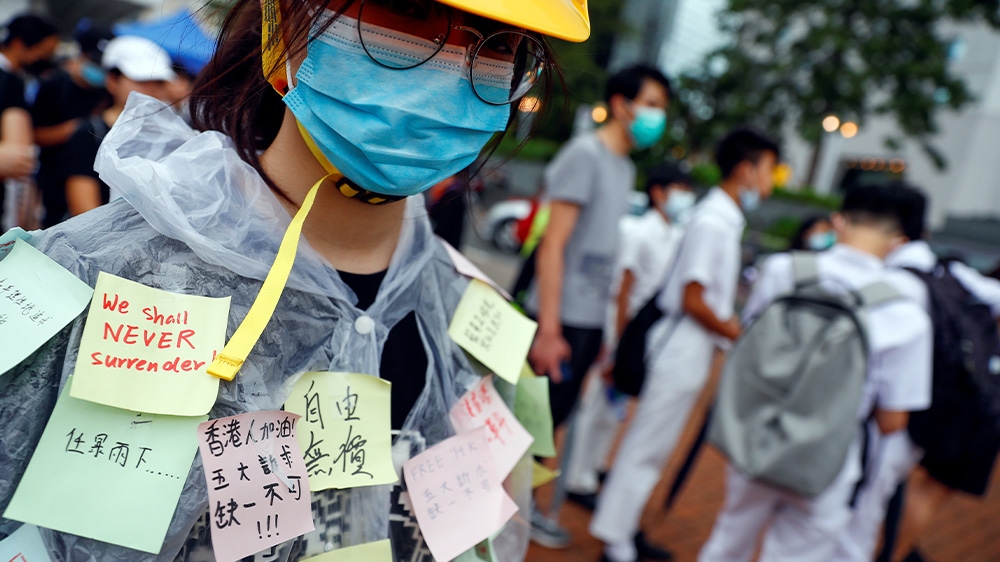 In 2012, tens of thousands of young people spent their summer fighting against a proposed curriculum on “patriotic education” that they claimed was an attempt at brainwashing. A hunger strike and makeshift camp outside government headquarters that lasted more than two months finally forced officials to scrap the plan.

And in late summer 2014, Beijing’s rejection of a call for universal suffrage set off a week-long boycott during the first month of class. Clashes with police at the end of that week eventually erupted into a 79-day mass sit-in that paralysed parts of the business district and became known as the Umbrella Movement.

“The process of building up our citizens only started after the handover,” said Stephen Chiu, a sociologist at the Education University of Hong Kong who has researched the city’s youth and social movements, noting that under British rule the territory’s people had been considered colonial subjects rather than citizens.

Part and parcel of citizenship-building in post-colonial Hong Kong, the Liberal Studies curriculum was introduced as one of the core requirements for secondary school matriculation in 2009.

Widely credited with grooming a new generation of critical thinkers passionate about social problems, the curriculum has recently come under attack by pro-Beijing politicians and conservatives for “radicalising” young minds.

In an article published in the China Daily on Monday, Tung Chee-hwa, Hong Kong’s first chief executive following the handover was quoted saying the curriculum, had been a failure.

“It is one of the reasons behind the youth problems today,” the mainland paper quoted Tung as saying.

Authorities had hoped the protest movement, which some have come to dub Hong Kong’s Freedom Summer, would fizzle once classes resumed, but the students seem determined to prove the government wrong.

“Our city’s officials have all but abandoned us, and their talks mean nothing,” said AC Chan, Pearl and Thomas’s classmate.

“We’ll keep coming out to bring the pressure to bear.”