US Secretary of State Mike Pompeo is due to hold talks in Saudi Arabia over a response to a weekend assault on two major oil facilities in the kingdom, as Iran denied any role in the attacks that hobbled the world’s top oil exporter.

Saturday’s attack on Abqaiq, the world’s largest oil processing facility, and the Khurais oil field knocked out five percent of the global oil supply and cut output by 5.7 million barrels per day. Saudi Arabia’s energy minister said on Tuesday that normal oil production would resume within weeks, rather than months.

While the Houthi rebel group in Yemen claimed responsibility and said it launched 10 drone attacks on the oil plants, a senior US official said one installation was hit “at least 17 times” and another was hit twice by “precision-guided munitions”.

Neither the type of drone “nor the cruise missiles employed in the attack can reach the facilities from Yemen,” the official told AFP news agency on condition of anonymity. “It’s not possible.”

The official said the United States will present evidence at the United Nations General Assembly (UNGA) next week that the attack involved cruise missiles from Iran.

In the immediate aftermath of the attack, Pompeo was quick to blame Tehran by accusing it of “an unprecedented attack on the world’s energy supply”.

US President Donald Trump hinted at possible military action by tweeting that Washington was “locked and loaded” – without mentioning Iran by name. But four days later, Trump appears to have no timetable for action. Instead, he has sent Pompeo to Saudi Arabia to consult with de facto ruler Crown Prince Mohammed bin Salman (MBS) and to see the results of investigations into the attack after France said on Wednesday that it was sending experts, at Riyadh’s request, to Saudi Arabia to investigate who carried out the attacks and how they did it.

Trump’s stance so far seems to be in stark contrast to 2017, when he waited only two days before launching air raids against Syrian President Bashar al-Assad‘s forces in retaliation for a chemical weapons attack.

Jon Alterman, a Middle East expert at the Center for Strategic and International Studies and a former State Department official, said Trump, who is seeking re-election next year, “has grown increasingly cautious as the reality of any military actions increased.”

“There’s a large constituency the president has that thinks it would be lunacy to go to war against Iran,” he said. “There’s a large part of his base that thinks the craziest thing we could do is committing ourselves to endless wars in the Middle East.”

Riyadh, so far, has not directly accused Tehran of being behind the attack – but the defence ministry said on Wednesday it will hold a news conference at 14:30 GMT to “present material evidence and Iranian weapons proving the Iranian regime’s involvement,” without elaborating further.

Earlier in the day, Saudi Arabia announced it would participate in a US-led maritime coalition in the Middle East, joining Australia, Bahrain and the United Kingdom.

“The kingdom’s accession to this international alliance comes in support of regional and international efforts to deter and counter threats to maritime navigation and global trade in order to ensure global energy security and the continued flow of energy supplies to the global economy and contribute to maintain the international peace and security,” a statement carried out by the state-run Saudi Press Agency said.

Washington formed the coalition after attacks on oil tankers that US officials blame on Iran over Iranian denials, as well as Tehran’s seizure of tankers operating in the region.

Meanwhile, Iran sent the US a diplomatic note denying any role in the attacks and warning it would respond to any action against it, state media said on Wednesday.

The formal memo sent on Monday through the Swiss embassy, which represents US interests in Tehran, “emphasised that Iran has not played any role in this attack,” the official IRNA news agency said.

It said Iran “denies and condemns claims” that it was behind the attacks. “It was also emphasised that if any actions are taken against Iran, that action will face an immediate response from Iran and its scope will not be limited to just a threat,” IRNA said.

Also on Wednesday, Iranian President Hassan Rouhani told a cabinet meeting that the Houthis’ attack on the oil facilities was meant as a “warning” for Riyadh to end its long-running war in Yemen.

Since March 2015, Saudi Arabia has been leading a military coalition in support of Yemen’s government forces in their fight against the Houthis. The war has killed tens of thousands of people and spawned what the UN calls the world’s worst humanitarian crisis.

In a video broadcast on state media, Rouhani accused Saudi Arabia and the US, among others, of starting the conflict in the Arab world’s most impoverished country.

“We don’t want conflict in the region … Who started the conflict? Not the Yemenis. It was Saudi Arabia, the Emirates, America, certain European countries and the Zionist regime [Israel] which started the war in this region,” Rouhani said in the video.

Trump began that campaign last year when he unilaterally pulled out of a 2015 international deal meant to reward Iran for allowing restrictions on its nuclear industry.

Iran’s Supreme Leader Ayatollah Ali Khamenei said on Tuesday Washington’s real goal was to bring his country to its knees.

“The policy of ‘maximum pressure’ against the Iranian nation is worthless and all Islamic Republic of Iran officials unanimously believe there will be no negotiations with the US at any level,” he said in a televised address.

Khamenei also said that as long as sanctions are in place, direct talks are impossible, including a meeting at the UN.

This appeared to nix remaining hopes for a meeting between Trump and Rouhani at the UN next week.

Speaking to reporters on Air Force One over California, Trump said he too had cooled on what had always seemed to be a diplomatic long-shot.

“I never rule anything out, but I prefer not meeting him,” Trump said. 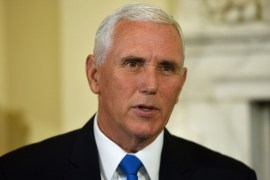