Zimbabwe’s former President Robert Mugabe will be buried in his village early next week and not at a national monument for liberation heroes in the capital, Harare, his family said.

Mugabe’s family and Zimbabwe‘s government have been at odds over whether he should be buried in his hometown in Kutama, northwest of Harare, or at the National Heroes Acre in the capital.

“His body will lie in state at Kutama on Sunday night … followed by a private burial – either Monday or Tuesday – no National Heroes Acre. That’s the decision of the whole family,” his nephew Leo Mugabe told AFP news agency on Thursday.

Mugabe, whose rule ended in a military coup in 2017, died last week, aged 95. His body was flown back from Singapore, where he was receiving treatment, on Wednesday.

Zimbabweans have been split over the death of a leader once hailed for ending white-minority rule in what was then called Rhodesia but who later purged his foes in a brutal crackdown.

His leadership and economic mismanagement forced millions to escape a country crippled by hyperinflation and shortages of food, drugs and fuel.

President Emmerson Mnangagwa had declared Mugabe a national hero after his death, indicating he should be buried at the national monument.

But the family said traditional chiefs in his home region of Zvimba should decide where he will be buried.

Some family members are still bitter over his removal, and the role his former ally Mnangagwa played.

Mugabe fired Mnangagwa in 2017, in what many believed was an attempt to position his wife Grace to succeed him.

Mugabe was overthrown by the military following massive protests.

Al Jazeera’s Haru Mutasa reporting from Harare said that one of Mugabe’s nephews has released a statement explaining that the family will have a private burial “because they’re angry at the way that Robert Mugabe was removed during a coup back in 2017”. 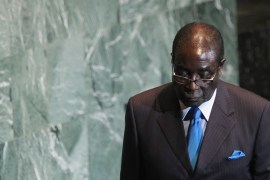 The former Zimbabwean president, who ruled for 37 years, died at the age of 95. 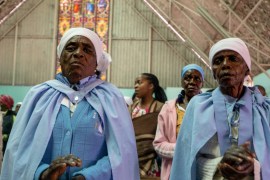 ‘A father to us’: In his village, Robert Mugabe mourned as a hero