“Today, I announce my intention, after the establishment of a new government, to apply Israeli sovereignty to the Jordan Valley and the northern Dead Sea,” Netanyahu said in a speech broadcast live on Israeli TV on Tuesday.

That step, he said, could be taken “immediately after the election if I receive a clear mandate to do so from you, the citizens of Israel”.

The Jordan Valley and the northern Dead Sea constitute almost 30 percent of the West Bank. Some 65,000 Palestinians and about 11,000 illegal Israeli settlers live in the area – most of which is under Israeli military control in what is referred to as Area C.

Netanyahu – who is fighting for his political life in a closely contested election – reaffirmed the pledge to annex all Jewish settlements throughout the West Bank, but said such a move would not be made before publication of a long-awaited United States peace plan and consultations with President Donald Trump.

“There is no change in United States policy at this time,” a US official said when asked whether the White House supported Netanyahu’s move.

“We will release our Vision for Peace after the Israeli election and work to determine the best path forward to bring long-sought security, opportunity and stability to the region.”

In 2017, Trump decided to move the US embassy from Tel Aviv to Jerusalem and recognised Jerusalem as the capital of Israel, reversing decades of US policy.

The Palestinian leadership has since declared the US cannot be an honest peace broker in negotiations with Israel.

Palestinian President Mahmoud Abbas said in a statement “all signed agreements with Israel and the obligations resulting from them would end” if Netanyahu went through with the move.

“The Palestinian territory is not part of Netanyahu’s election campaign,” Shtayyeh said.

Saudi Arabia said it considered the declaration a”violation of international law and a “very dangerous escalation against the Palestinians”. It called for an emergency meeting of the Organization of Islamic Cooperation foreign ministers to discuss the move.

The 2,400-square kilometre Jordan Valley, which Palestinians seek for the eastern perimeter of a state in the West Bank and Gaza Strip, stretches from the Dead Sea in the south to the Israeli city of Beit Shean in the north.

Israel has long said it intends to maintain military control there under any peace agreement with the Palestinians. It captured the West Bank in a 1967 war.

Annexing settlements would likely spell the end of any lingering hopes of establishing a Palestinian state alongside Israel. Netanyahu made no mention of what he would do with the territory’s more than two million Palestinian residents.

Tamer Qarmout, from the Doha Institute for Graduate Studies, told Al Jazeera that Netanyahu’s announcement – if it came to fruition – would “start a new phase in this conflict and it will destroy any hopes of a two-state solution”.

“The peace process is already clinically dead, this will literally end it,” he said.

Netanyahu’s announcement appeared to be aimed at shoring up support of hard-line nationalist voters. He is in a tight race and has turned to a series of dramatic announcements in recent days as part of a frantic effort to mobilise his supporters.

Al Jazeera’s Harry Fawcett, reporting from West Jerusalem, noted Netanyahu made similar promises in the past, including one in April, and there was scepticism from the Israeli media.

“When it was clear just how much of an electoral statement this was … a lot of the channels moved away from him mid-speech and started in a fairly mocking tone talking about how this was another supposedly dramatic statement,” Fawcett said.

Netanyahu’s repeated annexation threats ignore the fact it would be illegal under international law and “very dangerous”, Qarmout said.

For the international community not to address the Israeli leader’s comments sends the wrong message to all parties involved – especially the Palestinians, “who have lost a lot, paid a heavy price because of the occupation, and they don’t see anyone helping them in a sincere way”, he added.

“Endless” US support has given Netanyahu the confidence to make such bold statements, Qarmout said. “If it was not for Trump, I don’t think Netanyahu would have the courage to publicly talk about annexation.”

He highlighted Haaretz writer Anshel Pfeffer‘s tweets posted during the Israeli prime minister’s speech, who wrote: “Worth reminding that Netanyahu made some unclear promises of annexation before the election in April, but when after the election, in the now-aborted coalition talks, the far-right tried to pin him down on those promises, he wouldn’t make any commitments.”

Shortly after Netanyahu announced the plan to annex another part of the West Bank, rockets were fired from the Palestinian territory of Gaza, prompting the Israeli military to fire back and hit 15 targets, including a supposed weapons-factory facility.

Hours earlier, bodyguards rushed Netanyahu to shelter in the southern Israeli city of Ashdod when the sirens sounded during a Tuesday evening rally, a week ahead of the general election.

Netanyahu was unhurt and several minutes later he continued his speech, which was broadcast live on social media by his right-wing Likud party.

It said it would “continue to hold Hamas responsible for everything that comes from the Gaza Strip”, regardless of who actually fired the weapons. 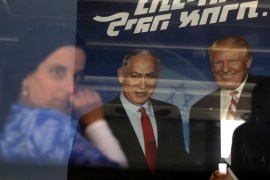 Israelis head to the polls on September 17 as PM Benjamin Netanyahu pledges to annex the Jordan Valley if elected. 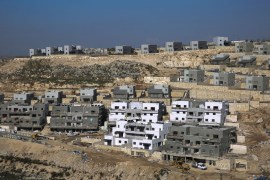 Peace Now says the plan is the latest in a surge of such approvals since US President Donald Trump took office. 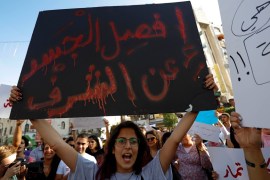 Israa Gharib was allegedly killed by relatives in an ‘honour’ killing after video showed her meeting a male suitor.