The southwestern city of Nagasaki on Friday urged the Japanese government to sign a UN treaty banning nuclear weapons as the country paid tribute to the victims of the US atomic bomb attack on the city 74 years ago.

“As the only country in the world to have experienced the devastation caused by nuclear weapons, Japan must sign and ratify the Treaty on the Prohibition of Nuclear Weapons as soon as possible,” Nagasaki  Mayor Tomihisa Taue said in the annual peace declaration at a ceremony marking the anniversary.

The treaty was adopted by 122 countries in July 2017, but it has yet to be in force as it has not been ratified by the required 50 countries.

The anniversary comes just a week after the Intermediate-Range Nuclear Forces (INF) Treaty between Russia and the United States ended.

“The atomic bombs were built by human hands and exploded over human heads. It follows that nuclear weapons can be eliminated by an act of human will.”

Survivors and other participants marked the 11:02am (04:02GMT) blast anniversary with a minute of silence.

The bombing of Nagasaki killed 74,000 people and came three days after the first atomic bomb dropped by a US B-29 bomber was detonated over the western city of Hiroshima. 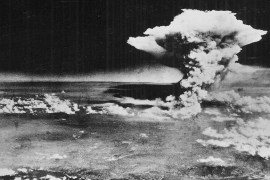 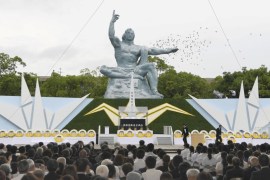