Editor’s note: Al Jazeera has withheld the identity of the reporter(s) of this story out of safety concerns.

“He did it at a very wrong time when the tourist season was at its peak. We are running at unimaginable losses after the tourists left.”

India’s government on Monday said it was scrapping Article 370 of India’s constitution that guaranteed special rights to Jammu and Kashmir, including the state’s right to its own constitution and decision-making process for all matters except defence, communications and foreign affairs. It also split the region into two federal territories.

The moves came after the Indian government deployed about 10,000 additional troops to the disputed region, followed by the unprecedented order asking tourists and Hindu pilgrims to leave the valley. It also imposed a curfew on parts of the territory, shut down telecommunications and arrested political leaders.

Gaffar said Modi’s priority was to get Hindus out of Kashmir. “He did not think [of] Muslims. Had he thought of us, he would have never ordered the tourists out of the Kashmir valley.”

Kamran, the owner of the Winterfell restaurant at Srinagar’s Boulevard area, said his business had also been hit hard after the sudden exit of tourists.

“For [the] first time in [the] last three years, we had a huge rush of foreign tourists. We have had tourists from almost every part of the world,” Kamran said.

Journalists working for both local and international media have also been affected by the movement restrictions and unavailability of the internet.

“I have not filed anything in [the] last three days because every mode of communication has been cut off,” a journalist said. “Our office in New Delhi now has sent [a] few journalists. I will send all my stuff of the last three days in a pen drive with them, so that the world gets to know what is happening in Kashmir valley.”

Another non-local journalist, who has come from Rajasthan state to cover Kashmir, said he had about 10 memory chips with him.

“I have accommodated myself close to Srinagar airport. [Over the last two days], I have sent out two chips with the people who are travelling to New Delhi. At New Delhi airport, our cameraman waits from 11:00am to collect the memory chip cards. That is how I am able to send the video feeds to my office,” he said.

Local newspapers such as Greater Kashmir, Rising Kashmir, Kashmir Monitor, Kashmir Life and Kashmir Reader have not updated their websites over the past three days fearing backlash from Indian authorities.

“We don’t want to run in any trouble this time because the authorities are only after the local press here. They unnecessarily harass us when the national media is showing everything, not only to the [rest of] India but to the entire world,” said the head of an IT department of a local newspaper.

A journalist with India’s Zee News Network was briefly detained by the Jammu and Kashmir police for filming near a police station in heart of Srinagar.

“We have strict instructions from the top that no journalist should be allowed to move,” Indian army personnel told Al Jazeera after an attempt to cross a barricade near Srinagar’s Hyderpora Bypass area.

After the Indian government issued an advisory cancelling a Hindu pilgrimage and asking tourists to leave “immediately”, visitors and non-local workers tried to find ways to get out.

But while nearly all tourists have managed to leave, the situation has been different for many of the workers.

A number of them have converged at the Tourist Reception Center (TRC) in Srinagar seeking to find a vehicle that will get them out.

“We came here (at the TRC) in the evening of August 5. The authorities have not provided us [with] tickets to leave this place. We are facing a lot [of challenges]. We are without proper food and sanitation. They (ticket providers) sometimes also beat us if we try to argue with them,” a non-local worker from Bihar said.

Meanwhile, the petrol pumps and the ATMs have been running dry.

“I travelled from Baghat area of the city to the Dalgate area but not a single ATM was operational. I need money for purchasing medicine for my parents,” Tahir, a post-graduate student said.

“We remember [a] curfew being imposed by the Indian Union home secretary during the 2010 mass unrest, and not by the chief minister here. Every law was imposed in Jammu and Kashmir without any hindrance by New Delhi. Everything is in black and white now. The mainstream [pro-India] is gone. They have been rendered irrelevant and [the anti-India groups] stand vindicated.”

An engineer from Srinagar’s Hyderpora area said there was no need to abrogate the special status as New Delhi could have achieved the “development” of the state without making the constitutional changes.

“New Delhi did it only because they want to change the demography of the state,” Burhan said.

India and Pakistan have fought two of their three wars over Kashmir, which both claim in full but administer separate parts of. A low-intensity rebellion against Indian rule has simmered for the past 30 years, killing tens of thousands of people, mostly civilians.

For the first time in the past three decades, pro-India politicians have been put under house arrest at their respective residences.

Al Jazeera headed towards Gupkar road where most of the pro-India politicians reside.

At the entrance of the area, there was a heavy contingent of Indian soldiers, paramilitary troops and police that prevents any locals or journalists from visiting them.

Al Jazeera’s next stop was the house of senior pro-India politician Muzzafar Shah, the vice president of Awami National Conference. But it was impossible to go past the residence’s gate, where there was a heavy security presence.

Reports, meanwhile, have said three civilians have been shot dead by Indian security forces, but Al Jazeera has not been able to verify them. 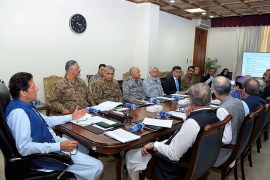 Pakistan to downgrade ties with India over Kashmir move

Islamabad says it will also suspend trade with India and take up New Delhi’s Kashmir move at the UN Security Council. 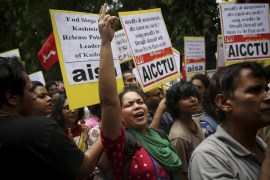