US immigration officials have raided seven meat processing plants in the southern state of Mississippi, arresting 680 mostly Latino workers in the largest workplace sting in at least a decade.

The raids on Wednesday happened just hours before President Donald Trump visited El Paso, Texas, the majority-Latino border city where a man linked to an online screed about a “Hispanic invasion” was charged in a shooting that left 22 people dead.

“On a day when we seek unifying words and acts to heal the nation’s broken heart, President Trump allows so many families and communities to be torn apart,” said Angelica Salas, executive director of the Coalition for Humane Immigrant Rights.

Trump has adopted a hard line on immigration – both legal and illegal – since coming to office in 2017. He has also labelled immigrants from South America as “criminals”.

About 600 US Immigration and Customs Enforcement (ICE) agents fanned out across the plants operated by five companies, surrounding the perimeters to prevent workers from fleeing. ICE said the raids were planned months ago.

“The execution of federal search warrants today was simply about enforcing the rule of law in our state and throughout our great country,” US Attorney for the Southern District of Mississippi Mike Hurst said in a statement.

In Morton, about 65km east of City of Jackson, the capital of Mississippi, workers filled three buses – two for men and one for women – at a Koch Foods Inc plant.

Those arrested were taken to a military hangar to be processed for immigration violations.

A tearful 13-year-old boy whose parents are from Guatemala waved goodbye to his mother, a Koch worker, as he stood beside his father. Some employees tried to flee on foot but were captured in the car park.

Workers, including Domingo Candelaria, who could show they were in the country legally were allowed to leave the plant after agents searched the trunks of their vehicles.

“It was a sad situation inside,” Candelaria said.

Mississippi is the nation’s fifth-largest chicken producing state and the plants’ tough processing jobs have mainly been filled by Latino immigrants eager to take whatever work they can get.

Koch is one of the largest poultry producers in the US, with operations in Mississippi and five other states.

The company did not respond to the Associated Press news agency’s telephone calls and emails seeking comment.

Matthew Albence, ICE’s acting director, told AP in an interview on Wednesday, that the raids could be the largest-ever workplace operation in any single state.

Asked about their coinciding with Trump’s visit to El Paso, Albence responded, “This is a long-term operation that’s been going on.” He said raids are “racially neutral” and based on evidence of illegal residency.

The companies involved could be charged with knowingly hiring workers who are in the county illegally and will be scrutinised for tax, document and wage fraud, Albence said.

Bill Chandler, executive director of the Mississippi Immigrant Rights Alliance, called the “terrible” raids “another effort to drive Latinos out of Mississippi” and he blamed Trump for fanning racism with his past incendiary comments about immigrants. 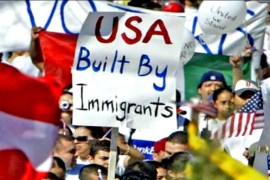 Is the US facing an immigration crisis?

President Donald Trump made a televised address on Tuesday on the issue of the proposed border wall. 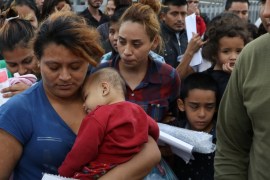 Nearly 13,000 families were apprehended while crossing the border in August, up from about 9,000 in July. 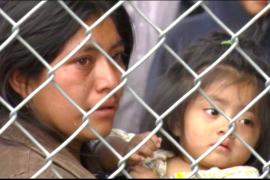 US government says border is at a breaking point as record number of families, mostly from Central America, are trying to seek asylum.