The Turkish Minister of Defence Hulusi Akar has said talks with the United States about averting a military intervention in the north of Syria had been “positive”.

“We witnessed with satisfaction that our partners grew closer to our position. The meetings were positive and quite constructive,” Akar was quoted as saying by the Anadolu state agency following the third day of talks between the two countries.

Talks started after Turkey said repeatedly it was contemplating military intervention in northern Syria against the Kurdish YPG, which Turkey considers an offshoot of the PKK group.

The PKK has fought a long and bloody insurgency in parts of Turkey in its pursuit of an independent Kurdish state.

The US has supported the YPG as it battled Islamic State in Iraq and the Levant (ISIL, also known as ISIS) in Syria, supplying the Kurdish forces with weapons and air support.

Both Turkey and the US agree that so-called “safe zones” should be created in northern Syria to prevent the YPG from encroaching on Turkish borders, but the sides disagree over the size of those zones.

“Our plans, preparations, the deployment of our units in the field are all complete. But we said we wanted to act together with our friend and ally, the United States,” said Akar.

“If that isn’t possible, we have said multiple times that we will do what is necessary.”

Turkey has repeatedly said the US is dragging its feet in setting up the safe zones. On Tuesday, Turkey’s President Recep Tayyip Erdogan warned the country was running out of patience. 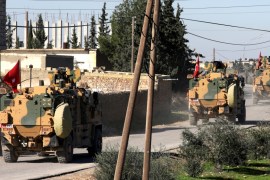 ‘Unacceptable’: US warns Turkey of operation in northern Syria