Restrictions on movement and a communications blackout for a third day in Indian-administered Kashmir have frustrated the region’s journalists, who call their struggle since Monday to get information about the disputed region out an “unprecedented” situation.

Most English and Urdu language newspapers based in the main city of Srinagar have not published their editions since Monday, when authorities imposed a lockdown of the valley to deter any protests against the Indian government’s decision to scrap the special status of Jammu and Kashmir state.

The Hindu nationalist Bharatiya Janata Party (BJP) government on Monday stripped the Himalayan region of its seven-decades-long semi-autonomous status through a contentious presidential decree, only hours after it imposed a crippling curfew on the valley.

Long a semi-autonomous state where only residents could buy land or take government jobs, Kashmir’s new status is as a “union territory” now directly ruled by New Delhi.

News reporter Mateen (name changed) said he managed to walk to the famous Lal Chowk from downtown Srinagar, almost 4km away, to get a video of the historic clock tower there.

But he said he was stopped from doing his work as soldiers blocked the area with concertina wires.

“I tried to take some photos and videos, but the deployed forces stopped me. They asked me to shut my camera,” Mateen told Al Jazeera.

“I told them I am a reporter. They replied: ‘Everything is over now, go back’,” he said.

With internet cut off, journalists working for news websites said they had not been able to update their pages since Monday, missing the biggest political development in Kashmir in the past seven decades.

Many journalists and photographers in the region, who work for news organisations outside Kashmir, said they had to send their reports and photos through USB drives carried by people flying out of the region.

“Other than blocking journalists’ access, the government has humiliated the people of Kashmir by shutting down their entire state,” said Sagarika Ghose, author and consulting editor with the Times of India newspaper.

Other journalists complained of the heavy security preventing them from doing their work.

“For the past two days, The Indian Express reporters have been holed up in their office from where they walk around to meet residents and then return. In the office building itself, dozens of policemen have moved in, the corridors their temporary shelter,” wrote journalist Muzamil Jaleel on his Facebook page after he was able to reach New Delhi from Srinagar on Tuesday.

“Kashmir has been turned invisible even inside Kashmir,” Jaleel wrote.

Only a handful of Kashmiris have been able to come out of Kashmir since the military siege began. Here is well-known journalist Muzamil Jaleel recounting what he saw: pic.twitter.com/xKmGEQJnRD

‘We fear for our lives’

For journalists in the region, the blockade is unprecedented as even in most turbulent times they were able to file stories and reports, unlike now.

“When they hear the word ‘journalists’, they (paramilitaries manning the roadblock) get [a] rash. They want to beat you,” a journalist who works with an Indian paper said.

“We have now stopped going out. We fear for our lives. I was told by forces on the road that journalists are not allowed to move. This country cannot call itself to be a democracy,” he added.

A photographer who works for an international news agency said he wanted to document the restrictions in the city but was told by security forces to leave before his camera was broken.

“There is a lot of hostility towards media now,” he said. “This is the murder of media. We have been completely stopped to tell the story of people. We really have no idea what is being reported when people are under immense stress from all sides. It’s a threat to overall survival for everyone living here,” he said.

A foreign journalist who had arrived in Kashmir a week ago and was given permission by the Ministry of External Affairs said police arrived at her hotel in Srinagar on Saturday directed her to leave immediately.

“I was scheduled to stay but they insisted I leave immediately and I was forced to book my ticket and leave on Sunday morning,” she said.

Meanwhile, newspaper hawkers said they were denied curfew passes by the security forces.

Sanna Irshad Mattoo, a multimedia journalist working for a local news organisation, said she left home on Tuesday to assess the situation and report, but she was stopped at multiple checkpoints.

“The forces clearly said they have orders not to allow any journalist to move. The distance which I could cover in five minutes took more than half an hour because of the checkpoints and barricades,” she said.

Mattoo said it was not like this in 2016, the last time the disputed region witnessed massive protests following the killing of young rebel Burhan Wani, in which more than 100 people were killed.

“This time, the Indian government is making every effort to stop people, especially journalists, from doing their duties,” she said.

“We are helpless. Even we don’t know what is happening. For the locals, it’s even worse. We don’t know if people are being killed or detained.”

Zubair Sofi contributed to this report 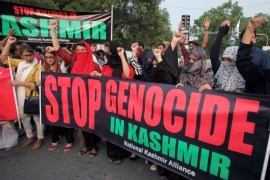 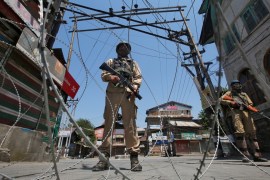 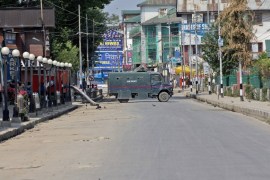 Bill to split Kashmir in parliament as region remains on lockdown

India’s BJP government brings bill to carve two ‘union territories’ out of Muslim-majority state, which is under curfew.