Srinagar, Indian-administered Kashmir – Ghulam Mohammad Mir, an ambulance driver on the move, has not communicated with his wife and two children since Monday when the authorities imposed an unprecedented clampdown on the disputed region, shutting down internet and mobile phones, barring movement and bundling Kashmiri leaders into jails.

But that has not stopped the 42-year-old from carrying expecting mothers and attendants from villages and towns to Kashmir‘s major Lal Ded maternity hospital in the main city of Srinagar.

“Except for Indian troops and their checkpoints, there’s nothing visible in the streets. I have been beaten up at several places for helping the patients since yesterday. What is my crime?” he asked.

Mir knows he hasn’t committed any crime but his ambulance is plying the streets of a new Kashmir, one that has just been stripped of its semi-autonomous character – including its constitution, flag, and hereditary rights – by the right-wing Bharatiya Janata Party (BJP) government using rush decrees and parliament votes, igniting an old powder keg in South Asia.

“Our honour has been sacrificed. When I heard about the abrogation of the terms of accession I felt like I have lost a part of my body. Kashmir is not going to remain the same area.”

“Zulm, zulm, zulm [injustice, injustice, injustice],” repeated a fuming Ghulam Mohmmad Reshi, 73, a farmer in northern Tangmarg area, who also went through several military checkpoints to reach the hospital with his daughter who is in labour.

“While we seek curfew passes from authorities to travel on our own roads, Indians are celebrating our collective mourning by distributing sweets,” he said, referring to footage of elated Indians being aired in Kashmir on the only TV channel in the region, state-run Doordarshan.

Before India ended Kashmir’s special status and split it into two territories to be directly ruled by New Delhi, tens of thousands of Indian troops were deployed to curb a potential uprising, in addition to the half a million troops already stationed there. The lockdown, enforced overnight on Sunday, has seen all means of communication snapped and restrictions on movement imposed.

“This blackout is unprecedented. We’re forced to store videos and pictures in our pen drives, which are then carried to our newspapers and TV channels in Delhi physically by those flying out of the valley,” a senior journalist with a New Delhi-based news magazine, speaking on condition of anonymity, told Al Jazeera.

“Other journalists are begging for bandwidth in government offices and hospitals with emergency internet facility available.”

Although a few leading dailies managed to print their newspapers on Tuesday, most of the stories were wires or curated articles, as local press remains dysfunctional. The websites of leading newspapers show stories from August 4 and 5 when the internet blockade began. 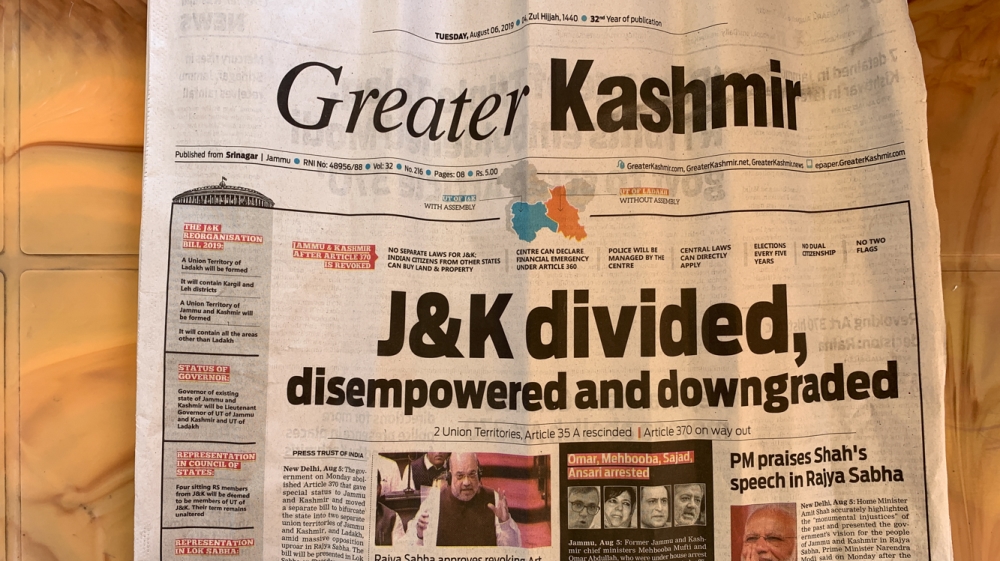 The picturesque Himalayan region remains disputed by India and Pakistan, who have fought two wars over it since 1947. In February this year, the nuclear rivals came dangerously close to a third war after a Kashmiri rebel rammed his car laden with explosives into an Indian army convoy, killing over 40 Indian soldiers and igniting tit-for-tat air attacks between Indian and Pakistani air forces.

Armed rebels and civilian protesters want either Kashmir’s independence or a merger with Pakistan through a UN-backed plebiscite. A low-intensity rebellion against Indian rule has simmered since 1989, leaving tens of thousands, mostly civilians, dead.

Pakistan says if New Delhi tries to change the demography of Kashmir by settling more Indians there, it could change the outcome of a future plebiscite.

Al Jazeera spoke with several locals who fear demographic changes will now be inevitable in the Muslim-majority region, now that citizens of largely Hindu India can buy property and seek government jobs there.

“Our bigger worry is that non-state subjects could overpower us and turn us into a minority soon. The future looks bleak,” said Nabi Khan, 65, who had been carrying his daughter-in-law to a maternity hospital when news broke of the end of Kashmir’s special status.

In her house in Abi Guzar neighbourhood of Srinagar, Safiya Nabi, 66, said she has been uneasy since her son told her about the fate of Kashmir’s autonomy.

We won’t be celebrating this Eid. It's a mourning.

“I have put up this face only to cook for my family and support them but my heart is crying. We will fight in the streets but won’t accept the rule of India, which betrayed us.”

The last time severe curbs were imposed in the disputed territory was in 2016 after the killing of popular rebel leader Burhan Wani, which sparked months of anti-India protests that left nearly 100 dead.

This time, Indian authorities have not only arrested separatists, they have also taken pro-India leaders into custody, along with their supporters in the run-up to Eid-ul-Azha.

“We won’t be celebrating this Eid. It’s a mourning. Under a well-planned conspiracy, the Muslims of the region are being punished,” said businessman Ahmed, who gave his first name only.

Fearing a mass uprising, India ordered Hindu pilgrims and tourists to vacate the region citing “terror threats”. Police searched hotels and houseboats, asking tourists to leave, prompting a series of advisories from the UK, Germany, Israel, and Australia to their citizens against holidaying in the region.

“I have spent a month here and made many friends. My sense says that what the Indian government is trying to do is something which is not for the benefit of the Kashmiri people,” Rachel Jones, 41, a Canadian-born US tourist told Al Jazeera.

“So, I have decided to stay back. I feel my presence is very important to show my solidarity with Kashmiris.”

“I arrived seven days ago. I had a 25-day trekking plan but because of the announcements seeking tourists to leave I had to cut short my plans,” said Anuja Bose, a tourist from India’s western state of Goa.

“So far, I have been a solo traveller in the Kashmir valley. The people here are amazing.”

Hotel owners say the sudden advisories have killed their business in an area where the economy is already in a shambles.

“We were doing some good business. Not any more,” said Jehangir Ahmad, 33, a guesthouse owner in the Dal Gate neighbourhood.

“The police and the troops scared away our guests. And while I was shocked to hear India has abrogated our special status, some Indian tourists in my guest house rejoiced but I couldn’t utter my dissatisfaction to them. Deep inside I was like ‘you first stole our voices, and now, our land’.”

Others, like Waseem Wani, 32, a businessman, said Kashmir is headed for a West Bank-style arrangement where settlers push and squeeze locals out of their neighbourhoods.

“We have faced atrocities from the last four decades but now I am really worried about the future of my children. What will they face?” he asked.

“When I think of all this, the picture of kids of Palestine comes to my mind and I cry. India cheated on us after 70 years,” he said. “But we will not let Kashmir become another Palestine.”