“I feel a rebirth today, I feel like an honoured Indian today,” said Bhan, beaming with joy.

“It is a kind of happiness that I cannot explain,” added Bhan, a member of the Kashmiri Hindu community known as Pandits.

An estimated 100,000 Kashmiri Pandits left the Kashmir valley after an armed rebellion against Indian rule began in 1989.

While most of them settled in Jammu city in the southern part of Jammu and Kashmir state, a large number, including Bhan, came to India’s capital, New Delhi.

Nearly 30 kilometres away from Bhan’s house in West Delhi’s Pitampura area, in the Noida suburb of the capital, another Kashmiri who belongs to a different community said he felt “a sort of pain” in his heart.

“It is like something has been amputated from my body,” said Malik Altaf, a Muslim, who works in a software company.

“I feel helpless and deceived. Today, this country decided my future without letting me express my feelings.”

On Monday, India stripped Jammu and Kashmir of its special status by revoking Article 370.

The constitutional provision was the basis of the Muslim-majority state’s accession to the Indian union in 1947, when erstwhile princely states had the choice to join either newly-independent India or Pakistan.

The article allowed the state to have “limited autonomy” in certain areas, giving the India-administered region jurisdiction to make its own laws in all matters except finance, defence, foreign affairs and communications.

The scrapping of Article 370 is a “constitutional coup” carried out by the ruling Bharatiya Janata Party (BJP), which could have serious implications for Kashmir, said Communist Party of India (Marxist-Leninist) Liberation politburo member Kavita Krishnan.

“We understand the gravity of the situation and have apprehensions that Kashmiris will be harassed through an organised set up by right-wing groups,” Krishnan told Al Jazeera.

Kashmiri Muslims said they had felt the brunt of the Kashmir conflict since 1989 and were now feeling “deceived” over the “constitutionally promised” status.

“We are in a devil and deep sea situation. If we express our resentment against the revocation of Article 370, we will be labelled anti-national. If we remain silent, history will label us cowards,” Syed Muntazir, a Kashmiri student at New Delhi-based Jamia Millia university, said on Tuesday.

“Since yesterday, my friends from different parts of India and in the university have called to ask about the land rates in Srinagar, Anantnag and other parts of the region. They want me to tell them which is the best place to buy land.”

Since the announcement of the revocation of Article 370 by India’s Home Affairs Minister Amit Shah, social media has been flooded with purported advertisements offering plots of lands for sale in India-administered Kashmir.

So far, Article 370 had prevented non-residents from buying any property in the disputed region.

“This government claims that such a move was necessary for the full integration of the state and for its prosperity and development. But you see the mentality of the Indians, they are more interested in land than in the people of Kashmir,” Muntazir said.

Mushtaq Ahmad, a Kashmiri carpet trader, said he was “shocked by the decision”.

“We are disappointed. Our sentiments were attached to it. The law was a sense of protection for us and today we lost that protection,” he said.

There is considerable fear among Kashmiri Muslim professionals and students outside the state. Some of them were even reluctant to discuss the revocation of the special status in public.

“People set off firecrackers when they see us. They say they are also the owners of Jammu and Kashmir,” said a Kashmiri student, who did not want to reveal his name.

“Today, they only burst crackers. Tomorrow, they will pass on comments. Then violence will come as a final measure,” he said.

Far-right group, the Rashtriya Swayamsevak Sangh (RSS) which mentors the BJP, called the government’s decision a “full integration of India”, warning the Kashmiris against any “sloganeering or protesting”.

“No one needs to fear. They are as Indian as we are. We welcome them fully to this new India,” he said.

“If they live calmly, we have no issues, they will be safe and secure. But they should avoid any sort of resentment as it may fuel reactions.” 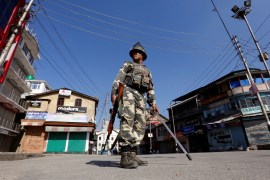 Kashmiris on edge as India tightens grip on disputed region

Residents wary and anxious as lockdown in the Muslim-majority region for a second straight day hits normal life. 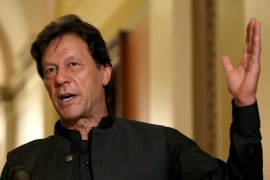