Islamabad, Pakistan – Pakistan has summoned the Indian High Commissioner to Islamabad to register the country’s “unequivocal rejection” of India’s decision to scrap a special status for India-administered Kashmir, simultaneously ramping up efforts to mobilise international support against the move.

Earlier in the day, India‘s Minister of Home Affairs Amit Shah told parliament in New Delhi that the president signed a decree abolishing Article 370 of the constitution that gave special autonomy to the India-administered portion of the Muslim-majority Himalayan region.

The announcement came after days of an escalated crackdown by Indian security forces on separatists in the disputed region, with thousands of troops deployed, a lockdown curfew imposed on parts of the state, a telecommunications shutdown and the arrest of political leaders.

Pakistani Prime Minister Imran Khan also spoke with the leaders of Turkey and Malaysia to brief them on the situation on Monday, according to statements from his office.

“[PM Khan] underscored that this illegal move by India would deteriorate the peace and security of the region and would further undermine the relations between two neighbors with strategic capabilities,” read the statement on his call with Malaysian Prime Minister Mahathir Mohamed.

Turkish President Reccep Tayyip Erdogan “assured of Turkey‘s steadfast support in this regard”, a Pakistani statement on the call said.

Nuclear-armed India and Pakistan have fought two of their three wars over the disputed northern territory of Kashmir, which both claim in full but administer separate portions of since gaining independence from the British in 1947.

Earlier on Monday, Pakistan’s foreign office hit back at the Indian decision, saying Islamabad will “exercise all possible options to counter the illegal steps”.

“Pakistan strongly condemns and rejects the announcements made today by the Indian Government regarding the Indian Occupied Jammu & Kashmir,” said a Pakistan foreign office statement.

“The Indian Occupied Jammu & Kashmir is an internationally recognized disputed territory. No unilateral step by the Government of India can change this disputed status, as enshrined in the United Nations Security Council (UNSC) resolutions. Nor will this ever be acceptable to the people of Jammu & Kashmir and Pakistan.

“As the party to this international dispute, Pakistan will exercise all possible options to counter the illegal steps.”

A day earlier, Khan had condemned the “irresponsible, unilateral and irrational behaviour” by India in the disputed territory, with the country’s top civilian and military leaders warning New Delhi’s crackdown was destabilising the region.

The prime minister was speaking at a meeting of Pakistan’s National Security Committee in the capital, Islamabad, on Sunday.

“The recent Indian measures will increase the levels of violence and turn this area into a flashpoint and a destabilising factor in the midst of two strategically capable neighbouring countries,” it said.

“Pakistan remains ready to defend itself against any Indian misadventure or aggression and will continue to provide all-out diplomatic, moral and political support to the brave people of [Indian-administered Kashmir] in their indigenous struggle to get justice and their right to self-determination in line with [United Nations Security Council] resolutions.”

In February this year, the two countries came close to all-out war over Kashmir, after India launched air raids on Pakistani territory in retaliation against an attack in India-administered Kashmir by the Pakistan-based Jaish-e-Muhammad group.

Pakistan denied any involvement in the attack, and retaliated to the military action with air raids of its own, hitting uninhabited areas of India-administered Kashmir. Those attacks prompted an aerial dogfight that saw at least one Indian fighter jet shot down and its pilot captured.

At the National Security Committee meeting, Pakistani leaders warned that they were concerned India may launch a “false flag operation” to implicate Pakistan-based armed groups and justify military action against Pakistan.

During a visit by Khan to Washington, DC last month, US President Donald Trump offered to mediate between India and Pakistan on Kashmir, an offer that Pakistan welcomed and India rejected.

On Sunday, Khan called on India to allow the mediation to take place.

“President Trump offered to mediate on Kashmir. This is the time to do so as the situation deteriorates there and along the [Line of Control, the LoC] with new aggressive actions being taken by Indian occupation forces,” said Khan. “This has the potential to blow up into a regional crisis.”

Since the escalation of Indian security forces operations in Kashmir last week, Pakistan has been lobbying at international forums such as the United Nationsand Organisation of Islamic Conference against the crackdown.

On Saturday, it condemned the alleged use of “cluster munitions” by Indian security forces in firing across the LoC, the de facto border between India-administered and Pakistan-administered Kashmir, and said at least six civilians had been killed and 48 wounded in Indian firing since July 19.

India accuses Pakistan of frequently violating a 2003 ceasefire along the LoC, killing civilians in India-administered Kashmir, as well as of supporting armed groups that are fighting Indian security forces.

“Pakistan army regularly attempts to push terrorists through infiltration and opens up with [a] multitude of weapons to assist them,” the Indian army was cited as saying by local media.

“India, during numerous Directorate of Military Operations-level talks, has maintained the right to respond. Such responses are only against military targets and infiltrating terrorists who are aided by Pakistan Army. Allegations of firing of cluster bombs by India is yet another Pakistan’s lie and deception,” the Indian army’s statement added.

Pakistan denies it supports any fighters who may cross the de facto border. On Saturday, Pakistan’s foreign office denied Indian claims that Pakistan has launched action across the LoC to target Indian security forces. 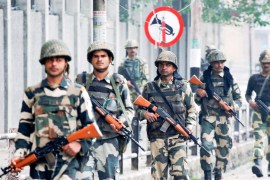 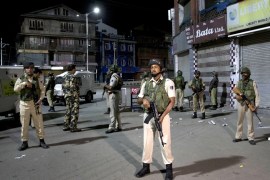