Turkey will launch its own operation to establish a “safe zone” in northern Syria if talks with the United States fail to give Turkish troops control of the area “within a few weeks”, President Recep Tayyip Erdogan has said.

“We do not have too much time or patience regarding the safe zone. Within a few weeks if our soldiers do not start controlling this area, there will be no other option left but to implement our own operation plans,” Erdogan said on Saturday during a speech in Istanbul, repeating his calls on Washington to go ahead with the promise to establish the zone.

The US-Turkey deal for the zone agreed earlier this month is intended to manage tensions between Turkey and US-backed Kurdish-led forces over the border in war-torn Syria that Ankara brands as “terrorists”.

The details of the plan are still unclear as is the size of the “safe zone” and how it will be managed or divided.

Turkey and the US have set up a joint operation centre for the planned zone, but talks about the details in question are still going on.

In his speech, Erdogan did not say what the plan would entail, but he has previously warned that Turkey would mount a cross-border offensive on its own to clear the Kurdish People’s Protection Units (YPG) fighters from its border if necessary.

US President Donald Trump proposed the “safe zone” last year, having announced plans to withdraw US special forces from northern Syria. But he later suspended the plan to ensure Washington’s Kurdish allies would be protected.

An official in the YPG-led alliance said on Tuesday that the YPG would pull forces and heavy weapons from a strip along Syria’s border with Turkey under US-Turkish deals.

The YPG withdrew from the Tal Abyad and Ras al-Ain border positions in recent days, proving it was serious about the ongoing talks, the Kurdish-led authority in north and east Syria said.

Washington and Ankara have been at odds over the future of the northern Syrian region, where YPG fighters formed the main part of a US-backed force fighting the Islamic State of Iraq and the Levant (ISIL or ISIS) before the group’s defeat there.

Turkey in recent years has already sent its military twice into northern Syria to push Kurdish fighters from its borders, and it currently controls a region in northwestern Syria together with allied rebels.

The “safe zone” was initially suggested by Washington last year to dissuade Ankara from carrying out another cross-border attack, after previous offensives in 2016 and 2018. 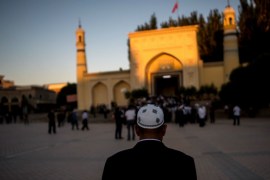 Turkey’s foreign ministry earlier lambasted Beijing’s treatment of the Uighurs as ‘a great embarrassment for humanity’. 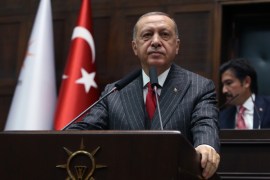 The Turkish leader says he will speak to President Trump, as Washington threatens to cut Ankara from F-35 programme.