The 75-year-old, who was toppled in April in the wake of mass protests against his three-decade rule, made the statement on Saturday after a judge formally charged him with illicit possession of foreign currency and corruption.

The offences could put al-Bashir behind bars for more than a decade.

Questioned in court for the first time, al-Bashir said he used the money for donations and not for his own benefit.

Sitting in a metal cage in the court in Sudan’s capital, Khartoum, al-Bashir said: “My office manager … received a call from the office of Saudi Crown Prince Mohammed bin Salman saying he has a ‘message’ that will be sent on a private jet.

“We were told that the crown prince did not want his name to appear [linked to the transaction] … and if the funds were deposited with Sudan’s bank or the finance ministry, the source would have to be identified,” he said.

But he told the court he had no record of how the money was spent.

Prince Mohammed told al-Bashir to “use the money as you see fit”, she added.

An investigator had previously told the court that al-Bashir received $90m in cash from Saudi royals.

The Saudi government communications office did not immediately comment on al-Bashir’s statement.

A lawyer for the former president said that his client denied the charges against him and that witnesses for the defence would be presented at the next hearing. Ahmed Ibrahim al-Tahir, the lawyer, previously told reporters it was normal for heads of state to hold foreign currency.

The court rejected a request from al-Bashir’s defence team for his release on bail.

The trial was adjourned until September 7.

Authorities found millions in foreign and domestic currency stockpiled at al-Bashir’s home after his arrest.

Al-Bashir was also charged in May with incitement and involvement in the killing of protesters.

Separately, the former Sudanese leader is wanted by the International Criminal Court on charges of war crimes and genocide linked to the Darfur conflict in the 2000s.

Speaking to Al Jazeera, William Lawrence, a professor of political science at George Washington University, said the optics of al-Bashir’s trial are “exceedingly important” as Sudan embarks on a transition to civilian rule following a power-sharing deal signed on August 17 by protest leaders and the generals who replaced him.

“Certainly both sides … will want to demonstrate that there is a growing rule of law, a justice system that can function,” said Lawrence.

But the transparency may have limits as the proceedings continue, he added, as there are “officials who are very corrupt who are being protected by the current military authorities.”

“It will be interesting to see whether they try to limit going forward what comes out of the trial to protect people still holding positions of confidence,” Lawrence said. 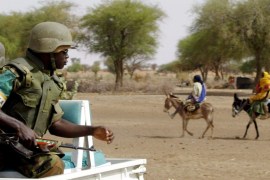 Sudan urges UN to withdraw all peacekeepers by June 2020

Sudan’s UN envoy says time to shift from peacekeeping to peacebuilding in Darfur and calls for troop withdrawals. 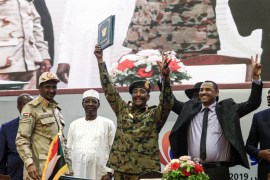