Lebanon’s president has said an Israeli drone attack on Beirut at the weekend was a “declaration of war” that justified a military response.

“What happened is a declaration of war,” Michel Aoun told Jan Kubis, the United Nations‘ special coordinator for Lebanon, in a meeting on Monday.

“This allows us to resort to our right to defend our sovereignty, independence and territorial integrity,” he added, in a statement released by his office.

Also on Monday, Lebanon’s Prime Minister Saad Hariri said his government wants to avoid an escalation with Israel, but the international community must reject Israel’s “blatant violation” of Lebanese sovereignty.

“The Lebanese government sees it best to avoid any sliding of the situation towards a dangerous escalation but this requires the international community affirming its rejection of this blatant violation,” Hariri told the ambassadors of the UN Security Council’s five permanent members, his office said.

Alleged Israeli drones crashed in a southern suburb of Lebanon’s capital, Beirut, on Sunday, prompting a strong reaction from the leader of the Hezbollah movement.

“Hezbollah will not allow such an aggression,” Hassan Nasrallah said in a televised address, adding that the drones were on a “suicide mission”.

“The time when Israeli aircraft come and bombard parts of Lebanon is over.”

Nasrallah also pledged to retaliate to an Israeli air attack inside Syria that took place late on Saturday, which he said killed two Hezbollah members.

On Monday, Iraq’s President Barham Salih hosted leading PMF members along with the prime minister and the parliament speaker to discuss the instability.

“These attacks are a blatant, hostile act that target Iraq,” the presidency said in a statement, adding: “Iraqi sovereignty and the wellbeing of its people are a red line.”

It stressed the government would take all necessary steps to “deter aggressors and defend Iraq”, but did not threaten a military response.

Later on Monday, the PMF said it spotted another drone flying over one of its bases in the northern province of Nineveh.

“It was immediately dealt with using anti-aircraft weaponry. The drone left the area,” the group said in a statement.

Asked what diplomatic action Iraq could take, the foreign ministry told AFP it would wait for official conclusions before resorting to the UN.

“If it was proven that a foreign entity was involved in these operations, we will take all steps – first among them, going to the Security Council and the United Nations,” spokesman Ahmad Sahhaf said.

Earlier on Monday, Israeli drones attacked a Palestinian base in eastern Lebanon near the border with Syria, Lebanon’s state-run National News Agency reported.

Three attacks which came minutes apart struck a base for a Syrian-backed group known as the Popular Front for the Liberation of Palestine – General Command (PFLP-GC), an ally of Hezbollah.

There was no immediate comment from Israel on the attack, which the agency said hit near the Lebanese village of Qusaya in the eastern Bekaa Valley.

Air raids by Israel against Palestinian factions in Lebanon, such as this one, have been rare in the past years.

Al Jazeera’s Zeina Khodr, reporting from Beirut, said the attack against the PFLP-GC base took place near the border with Syria, in very “rugged terrain”.

“It’s [the area] believed to be made up of tunnels, linking both countries together,” Khodr said.

Khodr said the attack was likely a message to Hezbollah more than the PFLP-GC since it came “just hours” after Nasrallah pledged to down any Israeli drone that violates Lebanese airspace.

Hezbollah and Israel fought a month-long war in 2006. The volatile border between the two countries, which remain technically in a state of war, has been mostly calm since that conflict. 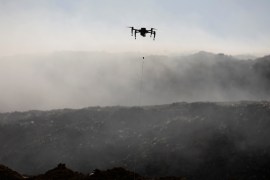 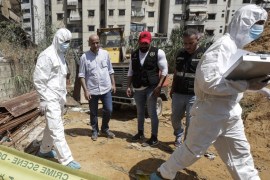 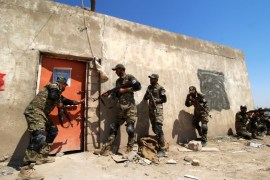 The Popular Mobilisation Forces said one of its fighters was killed in air raid in Anbar province on Sunday. 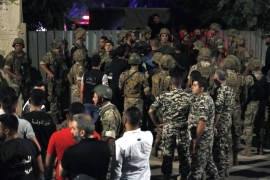 Lebanon PM made the comments after two drones came down in a Hezbollah stronghold in southern Beirut.