Slovenia has started work on an additional 40km of wire fencing along its southern border with Croatia to prevent people from entering the country irregularly, according to media reports.

The move on Thursday came after Slovenian border officials said July saw the highest number of crossings in a month since the peak of the refugee crisis a few years ago when thousands of people fleeing war and poverty in their home countries tried to move up from the Balkans towards northern Europe.

“The fence will be erected temporarily in the areas where it is necessary to prevent illegal crossings of the state border and ensure the safety of people and their property,” said Irena Likar, a spokeswoman for the Ministry of the Interior.

Likar said the exact timeline and location for the erection of the fence would not be made public.

Broadcaster POP TV reported that work had begun on a 4km stretch between the villages of Zilje and Zunici, in southern Slovenia.

A Reuters news agency photographer close to the nearby village of Preloka saw construction work under way at the site.

Slovenia first began constructing a border fence during the refugee crisis of 2015, when in six months, about half a million people passed through the country.

It has already constructed about 180km of mostly barbed-wire fence, and once the new section is completed, the total length of fence will be 219km and cover almost a third of the Slovenian border with Croatia

The army said its soldiers would bring their equipment to help the police operate in the area of the coastal town of Koper, which is near the Croatian and Italian borders.

The government’s immigration policy has met little opposition in Slovenia, although some civil society groups have opposed building the fence.

Most people come from Algeria, Afghanistan, Bangladesh, Morocco and Pakistan. Only a fraction seek asylum in Slovenia, with a majority continuing to neighbouring Italy and Austria. 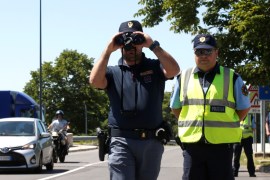 Slovenia to deploy soldiers to boost border patrols for migrants 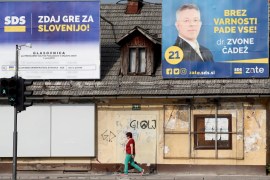 Although the anti-migrant SDS may struggle to form a coalition, analysts say the vote highlights rising populism.