Cox’s Bazar, Bangladesh – Driving through the Rohingya refugee camp in Cox’s Bazar, bamboo huts with tarpaulin roofs dot the landscape, while flags with the names of aid organisations ripple in the breeze.

Further down the road, young boys carry orange butane tanks to get free cooking gas, while men carry white bags of rice to bring back to their families.

A few metres further, a school building has been built, but no teachers or educational supplies are to be found.

“Compared to Myanmar, Bangladesh still feels like paradise,” said Metun*, a Rohingya refugee who has been living in Kutupalong refugee camp since 2017.

“But the conditions here are inhumane.”

Two years have passed since more than 700,000 Rohingya refugees arrived in Bangladesh, after fleeing violence by the Myanmar military, which the UN said bears the “hallmarks of a genocide”.

These refugee camps along the Bangladesh-Myanmar border have become the most populated in the world.

“There are still problems with access to services, access to info, and basic things like referral systems are still not totally in place. However, (the) situation has stabilised. So it’s not a mass crisis like it was before when people don’t know where to get services, or who to talk to.”

While the camps are still considered by the Bangladesh government and aid officials to be temporary, many of the residents say that their concerns have switched from everyday survival to longer-term concerns as the prospect for speedy repatriation dwindles.

“I do not anticipate being able to return within five years, so I am preparing myself to be here for longer,” said Metun.

“If we have to stay here for a long time, I would like the Rohingya to benefit from education, security, refugee status, better access to secondary healthcare, and employment.”

“Children should be in school, but there are no schools for them,” said Metun. “If they stay five or six years here, they will be unable or willing to go back to school. The longer we stay here, the more children will be lost.”

Security is another major concern for those living in the camps.

While security is provided around the perimeter of the camps, the camps themselves do not have electricity at night.

Metun expressed concern that women and children were the targets of human trafficking.

In the 2019 Trafficking in Persons Report published by the United States’s Department of State, it was found that, “the government of Bangladesh does not fully meet the minimum standards for the elimination of trafficking, but is making significant efforts to do so,” with a large section of the country’s profile focused on the trafficking of the Rohingya.

The Bangladesh government has said it plans to place fences around the camps – but the Rohingya have voiced doubts over the efficacy of this measure.

When incidents in the camp do happen, victims have limited access to a judicial process.

The camps operate with an intricate system of “majhi”, or Rohingya camp leaders, reporting to  Bangladeshi civil servants working alongside the Bangladeshi military.

Aung Tun* who believes his daughter was abducted, told Al Jazeera that he went to the camp head, expecting help, only to be turned away.

Seeking answers, Aung Tun then went to the camp where he believed his daughter was taken.

“Their office took my information and then said, ‘Go back to your home this is not our issue to deal with’, and then told me if they would not interfere with [my own] camp’s issues,” he recalled to Al Jazeera.

The camp leadership system also has come under scrutiny for corruption as well.

“Over the years, the majhi system has been criticised for being prone to abuse of power and exploitation,” stated a report by independent humanitarian analysis group ACAPS.

“The most significant and common reports of abuse of power include; paying for Bangladeshi nationality papers, diversion of aid and sexual exploitation and abuse.”

In the camp, Aung Tun is still waiting for answers.

“I still have not received any assistance, and do not know where my daughter is,” he said.

Al Jazeera has twice contacted officials involved but has received no response.

To address the ongoing needs, the United Nations launched a new appeal in February, requesting $920.5m in assistance for the 1.2 million Rohingya refugees and local host communities.

Meanwhile, refugees in the camps say they feel growing frustration at the lack of consultation with local and international non-governmental organisations.

“Everybody has been saying they are working for us but nobody comes to consult with us,” said Mohib Ullah.

The same dissatisfaction with progress was expressed about the UN.

“The international community is not doing enough- they should do more and speak with us,” said Khin Maung, a founder of the Rohingya Youth Association.

“The United Nations Security Council has failed us Rohingya by not taking more action [against] Myanmar.”

While the Myanmar government has said that it is prepared to accept 3,540 refugees that they have verified, Rohingya refugees say that they are not willing to return to Myanmar until their demands for full citizenship are met.

The refugees are refusing to accept National Verification Cards – instead of full citizenship cards – that the Myanmar government would give to those who choose to repatriate.

Rohingya refugees also cite continued conflict and human rights abuses in their home state of Rakhine, where ethnic armed fighters and the Myanmar military are embroiled in conflict.

Rohingya that are still in Rakhine have been forcibly confined to internment camps for years, lacking access to work, health, education or freedom of movement.

“We have stated that right now we don’t see the conditions [for return] there,” Marin Din Kajdomcaj, the UNHCR Head of Operations and Sub-Office in Cox’s Bazar, told Al Jazeera.

“These conditions have to be created and it is the primary responsibility of the [Myanmar] government to create these conditions.”

With the situation in Myanmar as it is, it seems there is no end in sight for the Rohingya crisis, but some still hold on to hope that they will be able to return soon.

“I am a genocide survivor in Bangladesh, but I cannot forget my country,” said Khin Maung.

“I want to go back and help develop my country … I am hoping to participate in the 2020 [general] elections for our country because then I can help change our society and our country.”

*Some names have been changed due to security concerns 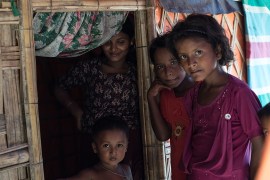 What is Myanmar offering the Rohingya to return home? 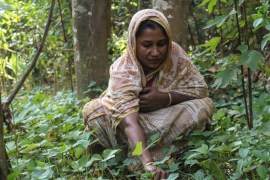 Deforestation and degradation will see the Bangladesh land that hosts refugees suffer further from temperature rise. 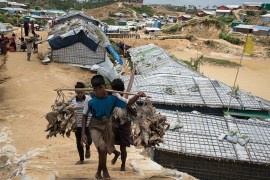 Joint exercise led by the UNHCR to determine if Rohingya refugees will accept Myanmar’s offer to return home.