The death toll from a suicide bomb attack at a wedding hall in Afghanistan’s capital Kabul has risen to 80.

The death toll stood at 63 on Sunday, a day after the blast, which jumped to 80 by Wednesday. Interior Ministry spokesman Nusrat Rahimi said 17 civilians died from their wounds in recent days.

He added that 30 people were in critical condition after the attack.

“Seventeen others have succumbed to their injuries in hospital and over 160 are still being treated either in hospitals or at home,” Rahimi said.

The blast was so powerful that it blew much of the roof off the huge wedding hall, where hundreds of guests had gathered.

The Islamic State of Iraq and the Levant (ISIL or ISIS) group claimed responsibility for the attack.

It was Kabul’s deadliest attack since January 2018 when the Taliban packed an ambulance with explosives and detonated it in a crowded street – killing 103 people, according to an official toll.

Many Afghanistan independence day celebrations that were scheduled to take place on August 19 were suspended in the aftermath of the horrific attack.

So far, security officials have yet to provide any explanation as to why the wedding was targeted.

Mansoor, a 28-year-old Afghan who had 12 relatives attending the wedding, said he was told by some survivors that the attacker arrived on a bicycle.

He said he believed the target of the attack was not the wedding party.

Though Afghan wedding events have been targeted in the past, the attacks have mostly taken place in remote areas and usually attended by high-profile officials or strongmen targeted by rival forces or armed groups such as the Taliban or ISIL.

US forces have also been accused of attacking several wedding parties across the country during their military air campaigns.

“Our struggle will continue against [ISIL], we will take revenge and will root them out,” he said on Monday.

He urged the international community to join those efforts.

With additional reporting by Ali M Latifi in Kabul 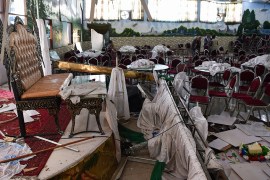 Debate over marking 100th year of independence had been intensifying even before Kabul blast saw celebrations postponed. 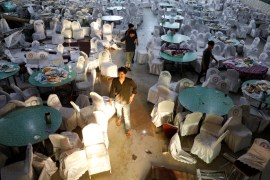 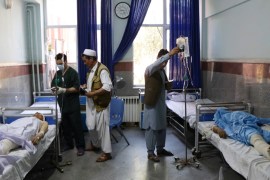 July casualties in Afghanistan highest since May 2017: UNAMA

More than 1,500 people were killed or injured in July 2019, as peace negotiations fail to find solution to bloody war.