Air raids have struck near a Turkish military convoy making its way through Syria’s rebel-held Idlib province, the Turkish defence ministry has said, adding that at least three civilians were killed and 12 wounded.

The ministry “strongly condemned” Monday’s air raids, saying they were contrary to “existing agreements as well as our cooperation and dialogue with Russia”.

It also called for “urgent measures” to prevent a repeat of the incident.

Turkey said the convoy was heading to one of its observation posts in Morek in northwest Syria, but the Syrian government said it had entered the country carrying ammunition to help opposition fighters who have lost ground this month amid a Russian-backed military push to retake the country’s last rebel-held area.

As this develops, the UK-based monitoring group, Syrian Observatory for Human Rights, reported that Syrian army troops and their allies have entered Khan Sheikhoun, a strategic area, in the region.

The source, from one of the rebel factions there, said pro-government forces entered only part of the town and rebels were waging fierce battles to fend them off.

Ankara backs some of the rebels in northwest Syria and has deployed forces into the Idlib region under deals with Moscow, the most powerful ally of Syrian President Bashar al-Assad.

Syrian state media, SANA, quoted a source in Syria’s foreign ministry denouncing Turkey’s move as an act of “aggression”, saying it would not affect “the determination of the Syrian Arab Army to keep hunting the remnants of terrorists” in Khan Sheikhoun or elsewhere.

It was not immediately clear whether Syrian government or Russian fighter jets had struck near the convoy, but the development marked a sharp escalation in tensions in Idlib.

Hours after the air raids, the Turkish convoy was still just north of the village of Heesh in Idlib, Yazan Mohammed, a media activist based in Idlib province, was quoted as saying by the Associated Press news agency.

In an interview with Al Jazeera, Wa’el Alzayat, former senior Syria adviser to the US government, said the recent raids were mostly likely deliberate.

“By all indications, the Turkish forces and allied Syrian opposition groups, the Syrian National Army, were heading towards the southern edge or the front line of Idlib province to try to slow down the government of Bashar al-Assad’s advances to enter the province.” 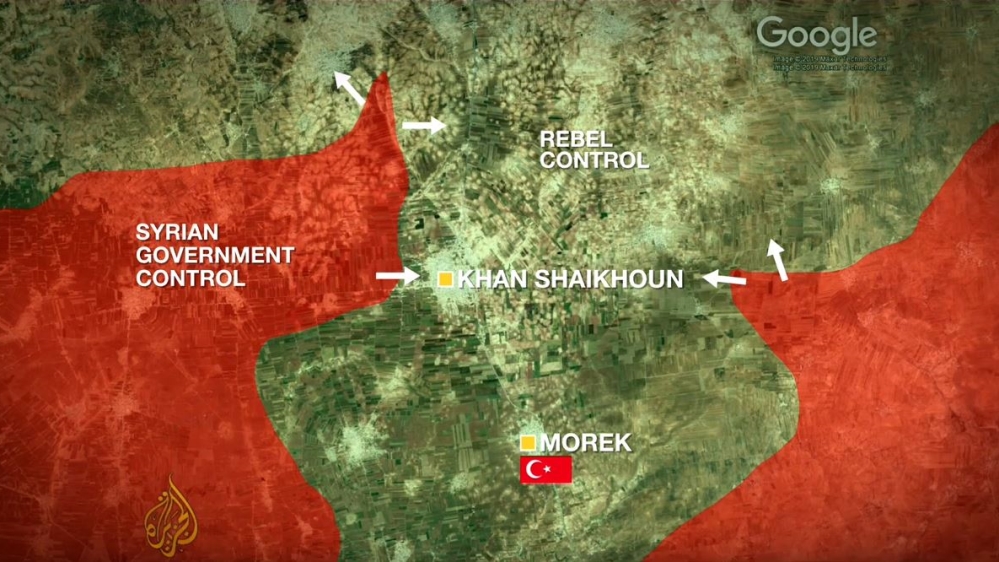 “The Syrian regime, probably in coordination with the Russians, carried out that strike as either a warning, or they intended to hit the military convoy,” he added.

“The National Army were sent in [as] massive reinforcements to the front lines in Idlib and the second we have seen today [in the] morning [was] that the Turkish army sent in a massive convoy to Khan Sheikhoun in order to establish a base there and to prevent the Assad regime from cutting the M5 highway,” Omer Ozkizilcik, an Ankara-based Syria analyst for SETA Foundation, told Al Jazeera.

Such a move on the highway would allow the Syrian government to connect cities under its control and revive trade – but main population centres such as Khan Sheikhoun lie along the road.

He added that the convoy was forced to stop on the Damascus-Aleppo highway near the town of Maarat Al Numan as Russian air raids targeted positions in the area.

“It is clear that the Syrian-Russian alliance wants to send a direct message to the convoy: do not approach the areas where heavy clashes are taking place in and around Khan Sheikhoun,” al-Khalaf said.

“The Syrian regime did not enter Khan Sheikhoun and fighting continues in the vicinity of the city,” said Dima Moussa, of the Syrian National Coalition, an opposition group in exile.

“The Turks have sent reinforcement to prevent the Syrian regime from entering Khan Sheikhoun and as usual the Syrian regime targeted the Turkish convoy. Turkey is a key guarantor in this region as part of the de-escalation agreement and we do not expect it to give up.”

Idlib is home to three million people, half of whom are internally displaced after being transferred en masse to the province from other areas that fell to pro-government forces.

Air raids on the area have intensified in recent days after a short-lived ceasefire.

Khan Sheikhoun – a major rebel-held town controlled by the Hay’et Tahrir al-Sham (HTS) group, a former al-Qaeda affiliate – is in one of Idlib province’s outer areas that lies on a key highway that connects Damascus with the northern city of Aleppo.

Pro-government forces are seeking to surround and enclose the area and if they succeed, they will also surround a Turkish military observation point in the area, al-Khalaf noted.

The United Nations has called for respect for the lives of civilians as well as medical and humanitarian workers, saying the death toll is “rising every day”.

In the past four months, the UN has documented 500 civilian deaths. It has also said that at least 42 attacks on healthcare facilities have been reported during the period.

Russia and Syria say their forces are targeting the rebel groups, including HTS, and not civilians.