The two sides are nominal allies in a Saudi-UAE-led military coalition battling the Houthi rebel movement after the latter took over the capital, Sanaa, and most major cities in 2014.

But earlier this month the so-called Security Belt militia, of the pro-secession Southern Transitional Council (STC), broke with the government and seized its temporary base of Aden. The United Nations said at least 40 people were killed in several days of fighting in Aden, which has functioned as the seat of President Abd-Rabbu Mansour Hadi‘s government.

Amid escalating tensions, the Security Belt on Tuesday overran a military camp belonging to the government’s special forces in Zinjibar, about 60km east of Aden in Abyan province, and deployed across much of the city, unidentified officials and residents told The Associated Press news agency. The clashes killed at least three civilians and wounded nine, AP reported.

Separately, Abyan Governor Abu Bakr Hussein told AFP news agency that the separatists had also seized a nearby military camp at Al-Kawd, forcing out the 350 troops there.

At least four military personnel – two separatists and two government troops – were killed and 23 wounded in the fighting, Hussein said, adding that 1,100 troops had been stationed in Zinjibar.

The United Arab Emirates (UAE) is Saudi Arabia‘s main partner in the military coalition against the Houthis, but it has trained and equipped the separatists.

Analysts say the rising tensions between the separatists and the internationally recognised government reflects a wider rift between Abu Dhabi and Riyadh and complicates UN peace efforts in war-ravaged Yemen.

“What Abyan governorate is witnessing is an unjustified escalation by the STC,” the Yemeni foreign ministry quoted him as saying.

“It is something that is rejected and unacceptable and will undermine mediation efforts by Saudi Arabia,” he added, referring to a delegation sent by Riyadh to Aden to discuss the new front in the war.

Al-Hadhrami also called for an “immediate and complete halt of the military and financial support” by the UAE to the separatists.

Nizar Haitham, STC spokesman, said the council was open to dialogue but ruled out any withdrawal from the military posts in Aden.

“There will be no dialogue if we were to hand over all the positions … what will there be left to negotiate,” he said in remarks published by the pan-Arab daily Asharq al-Awsat on Tuesday.

In a statement to the UN Security Council before a Yemen briefing on Tuesday in New York, the STC said it was holding firm to demands for self-rule in the south and to be included in any UN-sponsored talks on Yemen’s future.

“For too long the southern voice has been excluded from any negotiation table,” the STC said.

“The onus is now on the international community, and in particular the UN Security Council to accept the new realities on the ground.”

South Yemen was a separate state until it merged with the north in 1990. Four years later, an armed secession bid failed to reverse the reunification.

The UN’s Yemen envoy Martin Griffiths said told the UN Security Council that there is “no time to lose” in brokering a peace deal to bring the fighting to a close.

“The fragmentation of Yemen is becoming a stronger and more pressing threat,” the British diplomat said via videolink from Jordan on Tuesday.

“The stakes are becoming too high for the future of Yemen, the Yemeni people and the wider region. Yemen cannot wait,” he continued.

“No country can tolerate the stresses of internal conflict indefinitely,” he added, saying the war must be brought to an end “swiftly and peacefully.”

Griffiths also said he had held a “positive and engaging” meeting with Saudi’s deputy defence minister, Prince Khalid bin Salman, on Monday to discuss the crisis.

“Tireless role under Khalid bin Salman’s leadership to restore order and stability in south Yemen,” he tweeted. “We agreed on the need for continuous dialogue.” 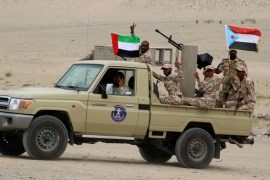 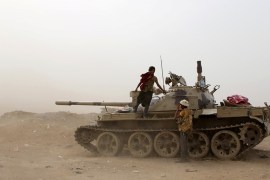 A look at the different groups clashing and the effect the recent developments will have on Yemen’s peace prospects. 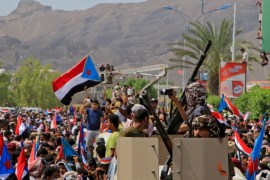 Yemen: Thousands march in Aden in support of separatists