Efforts by the Association of Southeast Asian Nations (ASEAN) to encourage “dialogue” between Rohingya refugees and the Myanmar government have sparked fierce criticism from Rohingya activists, who accuse the bloc of whitewashing the Myanmar military’s crimes and legitimising deeply flawed repatriation plans.

A team from the humanitarian arm of the 10-member trade bloc joined a Myanmar government delegation on a visit to camps in Bangladesh last week in a bid to launch fresh repatriation talks with Rohingya leaders and activists.

Almost 730,000 Rohingya arrived in the camps in Cox’s Bazar after fleeing military-led massacres in Myanmar’s western Rakhine state in late 2017.

Since their arrival, relations between members of the minority and those who are supposed to help them have often been fraught.

The United Nations‘s refugee agency, UNHCR, has sown mistrust by signing secret repatriation deals with Myanmar and pushing an identity card scheme that many Rohingya opposed, leading to alleged intimidation and violence when security forces tried to get them to sign up.

Bangladesh authorities, praised for their generosity in hosting the Rohingya, imposed severe restrictions on the refugees, preventing them from moving freely, getting an education, earning a living and denying them official refugee status.

At a meeting during the visit by the team, a Rohingya youth activist asked the ASEAN visitors what they were doing to help some 128,000 Rohingya in Rakhine state who are trapped in disease-ridden detention camps.

“We are not here to solve all your problems,” one of the delegates responded.

Some found the reply callous and dismissive and saw it as confirmation that ASEAN members were unconcerned with protecting the Rohingya rights.

“I know ASEAN can’t do everything,” Muhammed Nowkhim, the activist who asked the question, told Al Jazeera.

“But they can raise their voices for the Rohingya.”

Another attendee, Ro Sawyeddollah, said: “They were right. They were not here to solve our problems. They were here just to waste time.”

Arnel Capili, one of the ASEAN delegates, said the response was taken out of context.

He told Al Jazeera the delegate meant “the problems can’t all be solved in one go” and that there was a need for dialogue.

But Yasmin Ullah, research coordinator with the Free Rohingya Coalition, said the bloc is “laser-focused on getting Myanmar, as part of ASEAN, out of trouble for perpetrating genocide,” adding that its priority was strengthening economic ties between member states.

“The image of Myanmar as a genocidal authoritarian regime is quite damaging to those ties, and ASEAN is well aware of the fact that it is also being blamed,” she said.

The bloc faced a backlash last month when its Emergency Response and Assessment Team, part of the AHA Centre, wrote a report predicting a “smooth and orderly” repatriation process for the Rohingya.

The authors failed to speak with any Rohingya and made no mention of the mass rape, murder and arson that forced them to flee their homes, or the conditions that Rohingya are still facing in Rakhine.

The report “entirely adopted the Myanmar government’s narrative without question,” according to Charles Santiago, a Malaysian politician and chairperson of the ASEAN Parliamentarians for Human Rights advocacy group.

“It totally ignores all human rights abuses and atrocities committed against the Rohingya population. How could they assess conditions of repatriation when they did not even consult any of the refugees,” he added.

Capili argues it was beyond the AHA Center’s mandate to address rights abuses in this report and hoped member states will give them a mandate to interview Rohingya in Bangladesh for future reports.

ASEAN’s stance on the Rohingya is confused and inconsistent judging by the public statements of leaders from different member states.

Ahead of a summit of ASEAN foreign ministers in Thailand this week, Malaysia’s foreign ministry said it was “imperative” for Myanmar’s leaders to hold the perpetrators of abuses against the Rohingya accountable.

Along with Indonesia, another Muslim-majority country, Malaysia has typically been more outspoken on the issue than its neighbours.

Last year, Philippines President Rodrigo Duterte declared the violence against the Rohingya a “genocide” and offered members of the group refuge.

Last month, Thailand’s Prime Minister General Prayuth Chan-ocha said he was “sympathetic” towards the Rohingya, before adding: “But their looks, their appearance is very different from us. If you can accept to have more of these people in Thailand, that is up to you.”

But in an attempt to harmonise different states’ positions, the foreign ministers at this week’s summit released a joint statement calling on ASEAN to play a bigger role in providing aid, supporting development and helping with the repatriation process.

Reviewing the last part, Santiago, the Malaysian politician, is among those who are exasperated to see yet more talk of sending the Rohingya back when the military that drove them out is still in charge and has faced few consequences for its actions.

“It is infuriating to see that ASEAN is already talking about repatriation, when it is not safe for the Rohingya to return to Myanmar,” he said. 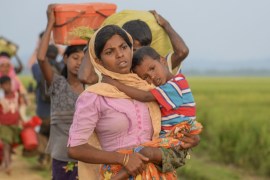 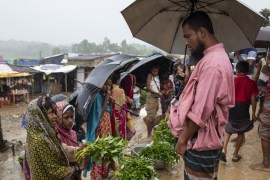 High-level delegation from Myanmar is in Cox’s Bazar to convince Rohingya refugees to return to Rakhine state. 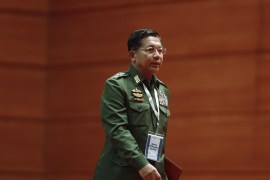 US slaps sanctions on Myanmar army chief over Rohingya abuses

The US action against senior army officers comes as the military has continued to ‘commit human rights violations’.