Indian Prime Minister Narendra Modi has hailed his “path-breaking” move to strip the Kashmir region it administers of its autonomy in a strongly worded speech marking India’s independence day.

Parts of Indian-administered Kashmir – the other part is administered by regional rival Pakistan – have been under lockdown and a near communications blackout since August 4, with freedom of movement severely restricted, affecting near four million people.

A day later, Modi’s government scrapped Article 370 of the constitution that granted the Muslim-majority region its special status and split Jammu and Kashmir state into two “union territories” to be controlled by New Delhi.

“Our freedom fighters fought hard and long for a free nation. But because of Articles 370 and 35A, there were issues. But today, I can say standing here at the Red Fort, with pride, that we are one nation and one constitution,” said the 68-year-old Hindu nationalist leader.

Speaking from India’s Mughal-era Red Fort in the capital New Delhi, Modi said “fresh thinking” was needed after seven decades of failure to ensure harmony in the Kashmir region.

“We do not believe in creating problems or prolonging them. In less than 70 days of the new government, Article 370 has become history. And in both houses of parliament, two-thirds of the members supported this step,” he said.

“Jammu-Kashmir and Ladakh will become a big inspiration for India’s growth journey, comfort, progress and peace.” Ladakh is the newly carved-out union territory.

C Uday Bhaskar, director at the Society for Policy Studies and a former Indian naval officer, told Al Jazeera that the challenge before Modi now is to persuade the Kashmiris that “whatever he is saying would be implemented in a very earnest manner”.

Reporting from New Delhi, Al Jazeera’s Faiz Jamil said the plan to strip Kashmir of its special status was conceived decades ago.

“Long before the speech, long before these events that we saw that began last week, this had been the goal, having Kashmir’s autonomy struck,” he said.

“This was the objective of the Hindu right, the ideological mentors of the BJP that Narendra Modi belongs to.”

Meanwhile, restrictions on movement and a communications blackout continued for an 11th day on Thursday in the Kashmir valley, while they were lifted from the Hindu-majority Jammu region.

“Restrictions imposed in Jammu have been completely removed and schools and other establishments there are functioning,” local police official Munir Khan told Indian media.

“Restrictions will continue in some places of Kashmir for some time,” he said.

However, the lockdown has not completely prevented anger from making itself felt.

On Tuesday, the Indian government admitted that clashes had taken places in various parts of Indian-administered Kashmir, blaming them on stone-throwing “miscreants” and saying its forces reacted with “restraint”.

However, reports from the restive region said several people were wounded in pellet gun attacks by the security forces.

Before the clampdown began, tens of thousands of troops were deployed to Kashmir – joining 500,000 already there – turning parts of the main city of Srinagar into a fortress of roadblocks and barbed wire.

Politicians, university professors, business leaders and activists are among more than 500 people taken into custody in the region, some of them spirited away to other locations around India, according to reports.

“Will world silently witness another Srebrenica-type massacre and ethnic cleansing of Muslims in IOK?” he wrote. IOK (India-Occupied Kashmir) is how Islamabad refers to the region administered by India.

“I want to warn international community if it allows this to happen, it will have severe repercussions and reactions in the Muslim world setting off radicalisation and cycles of violence.”

Will world silently witness another Srebrenica-type massacre & ethnic cleansing of Muslims in IOK? I want to warn international community if it allows this to happen, it will have severe repercussions & reactions in the Muslim world setting off radicalisation & cycles of violence

Khan, who has compared Modi’s government to Nazi Germany, said on Wednesday that time had come to teach New Delhi a lesson and promised to “fight until the end” against any Indian aggression.

“The Pakistani army has solid information that they are planning to do something in Pakistani Kashmir, and they are ready and will give a solid response,” Khan said in Muzaffarabad, capital of Pakistan-administered Kashmir. 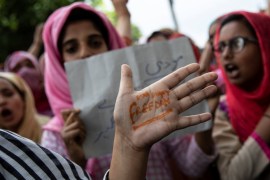 How are Kashmiris coping under lockdown? 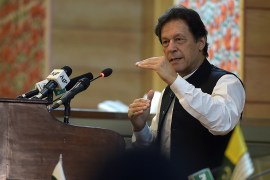 Khan says Pakistan not at war with India but against its ideology after Kashmir’s special status revoked. 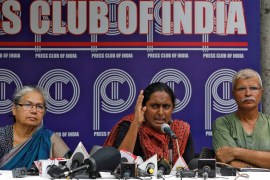