Six years ago, Egyptian security forces killed hundreds of supporters of Mohamed Morsi, the country’s first democratically elected president, in what was one of the deadliest days for demonstrations in Egypt‘s modern history.

The violent dispersal of the sit-ins at Cairo’s Rabaa al-Adawiya and al-Nahda squares on August 14, 2013, resulted in the death of at least 900 people and the wounding of more than 1,000, according to Amnesty International.

Egypt’s security forces maintain some of the demonstrators were armed and there were “terrorists” among their numbers.

Despite a wealth of evidence implicating the Egyptian army and police in killing the people protesting against Morsi’s overthrow, no one has ever been brought to trial and the Egyptian government has yet to transparently investigate the massacre.

“But six years on, no one has forgotten their crimes nor the fact that not a single perpetrator has been held to account, and it will remain this way until authorities deliver justice for the many victims and their families.”

The government-appointed National Council of Human Rights produced a report on the events, but its findings are at odds with witness accounts and human rights activists.

Since 2013, hundreds of protesters, including leaders of the outlawed Muslim Brotherhood, the group Morsi belonged to, have been convicted at mass trials. An Egyptian court in July 2018 sentenced 75 people to death for participating in the protest.

After his removal, Morsi was tried in several different cases.

In April 2015, he was sentenced to 20 years on charges of ordering the arrest and torture of protesters in clashes outside the presidential palace in 2012.

Morsi died in detention after collapsing in a Cairo courtroom in June. The United Nations has called for an independent inquiry into his death.

After enormous protests calling for Morsi to step down, the military announced it had seized power on July 3, 2013.

The protests – staged in Tahrir Square one year after Morsi was sworn into office – called for early presidential elections, with demonstrators accusing the president of failing to fulfil his electoral promises.

The now-outlawed Muslim Brotherhood called for counterprotests, with people gathering at Rabaa and al-Nahda squares to denounce the military coup.

The sit-in at Rabaa – which at one point drew about 85,000 protesters, according to Human Rights Watch – extended for more than 45 days.

Demonstrators slept, ate, prayed, and lived at the square. Many hoped the sit-in would succeed in pressuring the military to restore Morsi to the presidency.

As time passed, supporters of the military across the city grew frustrated with the defiant sit-in and calls to disperse them came from both largely pro-military private and state-owned media outlets.

The military-backed government officially ordered the dispersal of Rabaa and al-Nahda on August 14, with armoured vehicles, bulldozers and hundreds of security forces moving in the early hours. 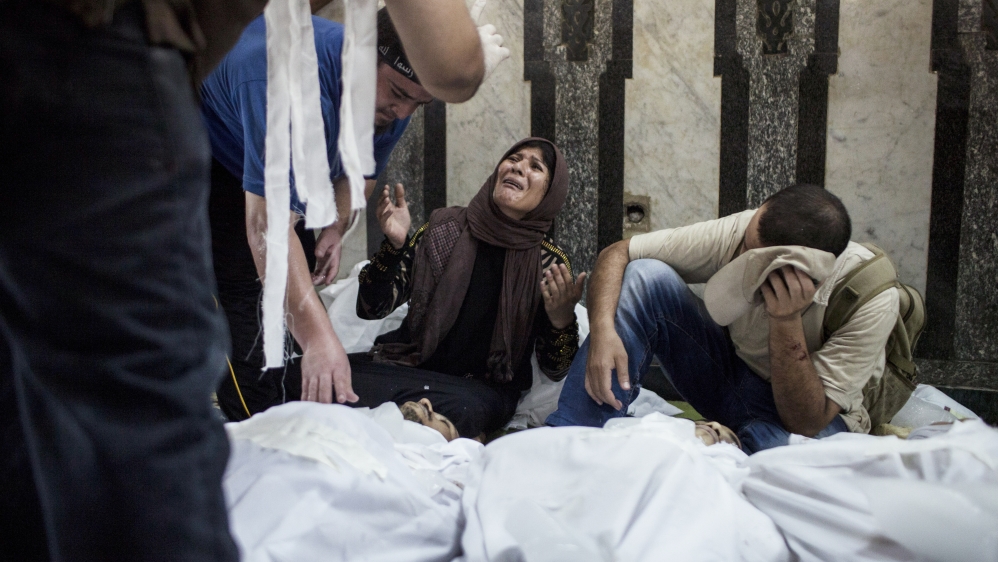 In 2014, after a year-long investigation, Human Rights Watch documented the events that led to the mass killings, interviewing witnesses and reviewing video footage.

Based on the findings of its 2014 report, the the New York-based group concluded the killings “likely amounted to crimes against humanity” and “were part of a policy”.

Referencing the 2014 report, Page told Al Jazeera that the rights group has continued to call for the investigation and prosecution of people “implicated in serious crimes under international law committed in Egypt in July-August 2013.”

Echoing HRW, Amnesty on Wednesday detailed in a statement how the “legacy of the Rabaa dispersal still haunts Egyptians,” referring to tens of documented cases of unfair trials, imprisonment in inhumane conditions, abusive probation periods, and ongoing impunity, among others.

“The authorities have been trampling over people’s human rights, and in particular the rights of those criticizing the government, to the point that Egypt has become an open-air prison for critics,” read the statement.

“If Egypt has any intention to move on from the ongoing human rights crisis it faces, the authorities must address the lingering legacy of the dispersal of Rabaa,” it added. 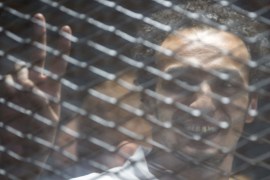 Senior Muslim Brotherhood leaders among 75 sentenced to death over 2013 Rabaa protests, journalist Shawkan to be freed. 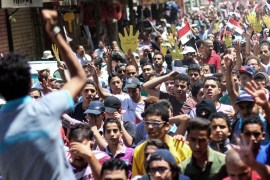 Alleged Muslim Brotherhood members arrested including some who had been sentenced in absentia to 10 to 15 years in jail. 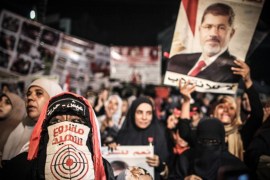 Half a decade after deadly crackdown of supporters of ex-president Morsi, human rights activists still call for probe. 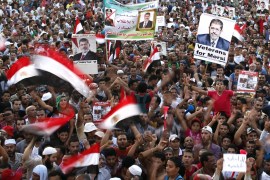