Correction13 Aug 2019
A previous version of the story featured images not associated with the blast at a missile testing site near Severodvinsk. They have been removed.

Thousands of people have attended the funerals of five Russian nuclear engineers killed by an explosion as they tested a new rocket engine, a tragedy that caused a large increase of radiation and raised questions about a secretive weapons programme.

The engineers were laid to rest on Monday in Sarov, which hosts Russia’s main nuclear weapons research centre, where they worked.

Flags flew at half-staff in the city 370km east of capital Moscow that has been a base for Russia’s nuclear weapons programme since the late 1940s. The coffins were displayed at Sarov’s main square before being driven to a cemetery.

Russia‘s defence ministry initially reported that the explosion at the navy’s testing range killed two people and injured six others.

But over the weekend, the state-controlled Rosatom nuclear energy company said the blast also killed five of its workers and injured three others. The final toll remains unknown.

Rosatom said the explosion occurred while the engineers were testing a “nuclear isotope power source” for a rocket engine.

The company said the victims were on a sea platform testing a rocket engine and were thrown into the sea by the explosion.

Rosatom director Alexei Likhachev praised the victims as “true heroes” and “pride of our country”.

The Russian government said on Tuesday that radiation levels around the site in Severodvinsk were up to 16 times higher than the norm, confirming widespread speculation.

“In six of the eight points in Severodvinsk, an excess gamma radiation dose rate at 4 to 16 times the background values was detected,” federal environment watchdog Roshydromet said in a statement, referring to the incident last Thursday.

Local authorities in Severodvinsk, a city of 183,000, had already reported a brief spike in radiation levels after the explosion, but said it did not pose any health hazards.

That statement from Severodvinsk’s administration came just as the defence ministry insisted that no radiation had been released, a claim that drew comparisons to Soviet-era attempts to cover up catastrophes.

“Only now, five days later, it is becoming known that the radiation levels near the test site had gone up 16 times more than normal. The highest concentration was measured at a local kindergarten,” Vaessen said.

“Authorities have been extremely tightlipped about the accident, which is feeding speculation and conspiracy theories. Many people here remember what happened in 1986 when the Chernobyl accident occurred in neighbouring Ukraine. Of course this is of a very different scale, but the same sort of information blackout happened at that time,” Vaessen added.

Spooked residents rushed to buy iodide, which can help limit the damage from exposure to radiation.

Russian environmental groups have urged the government to release details of the radioactive leak, but officials offered no further details.

Neither the defence ministry nor Rosatom mentioned the type of rocket that exploded during the test, saying only that it had liquid propellant.

But Rosatom’s mention of a “nuclear isotope power source” led some Russian media to conclude it was the Burevestnik (Petrel), a nuclear-powered cruise missile first revealed by Russian President Vladimir Putin in March 2018 during his state of the nation address along with other doomsday weapons.

Experts have also linked the blast to the 9M730 Burevestnik nuclear-powered cruise missile, known by NATO as SSC-X-9 Skyfall.

President Donald Trump weighed in on Monday on the blast, tweeting, “The United States is learning much from the failed missile explosion in Russia. We have similar, though more advanced, technology. The Russian ‘Skyfall’ explosion has people worried about the air around the facility, and far beyond. Not good!”

While presenting the new missile, Putin claimed it will have an unlimited range, allowing it to circle the globe unnoticed, bypassing the enemy’s missile defence assets to strike undetected.

The president claimed the missile had successfully undergone the first tests, but observers were sceptical, arguing that such a weapon could be very difficult to handle and harmful to the environment. 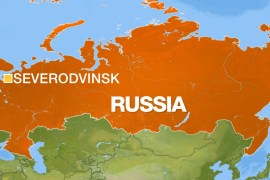 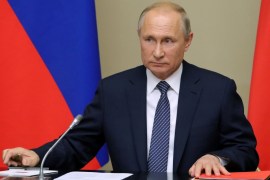 If US makes new missiles, Russia ‘will be forced to begin the full-scale development of similar missiles’, Putin says.