Former Kyrgyzstan President Almazbek Atambayev, who was detained in a raid on his residence in Bishkek last week, was seeking to overthrow the government, according to the head of the country’s security services.

Atambayev was detained in a major security operation on Thursday after a previous attempt to detain him a day earlier failed amid clashes between his supporters and law enforcement that killed one special forces officer.

“His intention was a state coup. I say that officially,” Orozbek Opumbayev, the head of the national security services GKNB, told a news conference in Bishkek on Tuesday.

Last week’s raids came after Atambayev ignored three police summons for questioning in connection with the release of a notorious underworld figure during his presidency.

The head of the state prosecutor’s investigations department, Zamir Beishekeev, said the former president would also be investigated for organising attempted murder.

Atambayev, who served as president from 2011 to 2017, was stripped of his immunity from prosecution in June in the wake of corruption allegations.

The 62-year-old has rejected the charges and accused the current authorities of abuse of office.

The Central Asian state, which has seen two revolutions in less than 20 years, is caught in a standoff between the former leader and his protege-turned-foe President Sooronbai Jeenbekov.

Jeenbekov and Atambayev were once friends, and the former leader backed the incumbent in the 2017 election, triggering accusations that administrative resources were used to sway the vote.

The current crisis has drawn in Russia – the country’s Soviet-era master and traditional political patron – where hundreds of thousands of Kyrgyz work as migrant labourers.

Last month, Russian President Vladimir Putin met Jeenbekov and Atambayev in Moscow in a bid to defuse the confrontation. 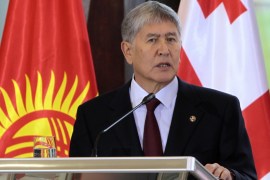 Angry supporters of former president gathered near the city centre and blocked a major thoroughfare to protest arrest. 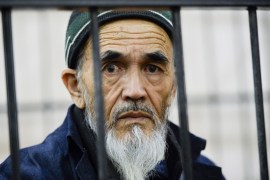 Azimjon Askarov was convicted for killing a policeman and jailed for life following ethnic clashes in 2010.