Police have clashed with pro-democracy protesters at Hong Kong‘s international airport after flights were disrupted for a second day running amid a deepening political crisis in the financial hub following weeks of mass demonstrations.

A mostly peaceful sit-in on Tuesday that saw thousands of black-clad protesters jamming the main terminal – some chanting, singing and waving banners – erupted into violence in the evening, with riot police firing pepper spray and using batons after demonstrators seized a man they claimed was an undercover mainland Chinese agent.

The scuffles broke out after police appeared at the departures entrance in an apparent attempt to help paramedics reach the man, who was injured. Several police vehicles were blocked by protesters and riot police moved in, pushing some protesters back and using pepper spray. At one point, a police officer pulled out a gun.

Protesters also barricaded some passageways in the airport with luggage trolleys, metal barriers and other objects. At least two protesters were taken away by police.

Separately, a reporter for the Global Times newspaper, a Communist Party mouthpiece which has sharply criticised the demonstrations, was also held by protesters. Footage showed the reporter’s hands being tied to a luggage car.

“GT reporter Fu Guohao has been rescued by police and sent to the hospital. We’re still learning about his injury conditions,” Hu Xijin, the newspaper’s editor-in-chief, later said in a tweet.

The protest on Tuesday prompted the cancellation of hundreds of flights for a second consecutive day, with the Airport Authority Hong Kong saying operations at the airport had been “seriously disrupted” and that departing passengers had been unable to reach immigration counters.

Al Jazeera’s Hoda Abdel-Hamid, reporting from the airport later on Tuesday, said calm had returned following the departure of most protesters from the site.

It was not immediately clear if Trump, who also urged calm between protesters and the authorities, was reporting fresh movements or movements near the border already reported in the media.

“Our intelligence has informed us that the Chinese Government is moving troops to the Border with Hong Kong. Everyone should be calm and safe!” he tweeted.

China hits back at UN

Now in its 10th week, the anti-government protests have sparked concerns Beijing might intervene directly to stop the unrest.

The Chinese government has been increasingly ratcheting up its rhetoric towards the protesters, saying on Monday they are showing the first signs of “terrorism”. This week, state-owned media have run videos showing trucks purportedly carrying paramilitary riot police massing near the border with Hong Kong for “exercises”.

The increasingly violent clashes between police and protesters have roiled Hong Kong as thousands of residents have repeatedly taken to the streets to protest against what they see as an erosion of freedoms and autonomy under Chinese rule.

The protests, which began with opposition to an extradition bill that would have allowed suspects to be tried in mainland China, have grown to include demands for the proposed law’s complete withdrawal, the resignation of Chief Executive Carrie Lam and an independent inquiry into police conduct against demonstrators.

Protesters in the former British colony say they are fighting the erosion of the “one country, two systems” arrangement that enshrined some autonomy for Hong Kong since China took it back in 1997.

In response, China’s mission to the UN in Geneva rejected what it called a “wrongful statement” by Bachelet, saying it amounted to interference in its domestic affairs and sent “the wrong signal to violent criminal offenders”.

In a statement, the mission said Hong Kong protesters had smashed public facilities, paralysed the airport, blocked public transport and used lethal weapons, “showing a tendency of resorting to terrorism”.

“The Chinese central government firmly supports Hong Kong Chief Executive Carrie Lam and the HK SAR government in discharging their duties in compliance with the law and supports the Hong Kong police force and judicial organs in enforcing the law decisively,” it said.

Hong Kong legal experts say Beijing might be paving the way to use anti-terrorism laws to try to quell the demonstrations.

The clashes at the airport followed an unprecedented airport shutdown the previous day.

Initially, the scene was peaceful as knots of protesters spoke to travellers, explaining the aims of their movement. Floors and walls were covered with missives penned by activists and other artwork.

“Sorry for the inconvenience, we are fighting for the future of our home,” read one protest banner at the airport.

“I think paralysing the airport will be effective in forcing Carrie Lam to respond to us … it can further pressure Hong Kong’s economy,” Dorothy Cheng, 17, told Reuters news agency.

For her part, Beijing-backed Lam insists that she will not quit.

“My responsibility goes beyond this particular range of protest,” she said on Tuesday, adding that violence had pushed the territory into a state of “panic and chaos”.

“Take a minute to look at our city, our home,” she told a news conference at the government headquarters complex, which is fortified behind nearly two-metre-high water-filled barricades.

“Can we bear to push it into the abyss and see it smashed to pieces?”

The rallies present Chinese President Xi Jinping with one of his biggest challenges since he came to power in 2012. 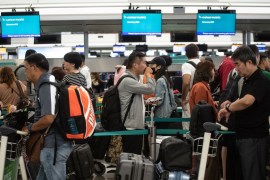 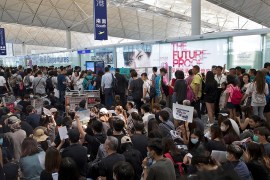 Authorities forced to suspend departing flights for second day as protesters gather at the airport. 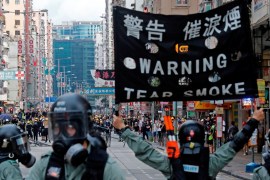