Israeli police have fired tear gas, rubber bullets and sound grenades to clear Palestinian worshippers from the Al-Aqsa Mosque compound in occupied East Jerusalem, the flashpoint of the Israeli-Palestinian conflict.

Thousands of Palestinians on Sunday gathered at the mosque for the first day of the Muslim festival of Eid al-Adha.

The day coincided with the Jewish holiday of Tisha B’Av, which typically sees an increase in Jewish visitors to the holy site.

A large numbers of Palestinians had gathered at the gates of the compound following reports that the police would allow Jewish visitors to enter the site.

Facing off with police in the packed compound outside Islam’s third-holiest site, Palestinians chanted: “With our soul and blood, we will redeem you, Aqsa.”

The Red Crescent reported 61 Palestinians wounded, 15 of whom were taken to hospitals.

Jews are barred from praying at the compound under a long-standing arrangement between Israel and Muslim authorities.

In recent years, Israeli religious nationalists have stepped up visits to the site to challenge the arrangement, while the Palestinians view it as a provocation and fear Israel intends to take over the site.

Israel views all of Jerusalem as its unified capital, while the Palestinians want the occupied East Jerusalem as the capital of their future state.

Reporting from East Jerusalem, Al Jazeera’s Harry Fawcett said tensions at the site been rising for some time.

“The gate was opened, but no non-Muslims were allowed in. There was this big standoff and then we saw the security forces move in to clear that standoff,” Fawcett said.

“That’s when we saw the police use rubber bullets, tear gas and sound grenades,” he added.

“There is a big political movement from the far right in Israeli politics to get more access to the area, and potentially to pray there in the future, and that is what is behind the tension,” Fawcett said.

“It’s our mosque, it’s our Eid,” said Assisa Abu Sneineh, 32, adding she was there when the clashes erupted.

“All of a sudden [security forces] arrived and began to hit and fire sound grenades.”

Some 1,300 Jews visited the site on Sunday, according to the Muslim Waqf organisation, which administers the holy compound.

Ali Abunimah, co-founder of Electronic Intifada, told Al Jazeera that the tension could have been prevented by Israel not allowing “religious extremists associated with the so-called Temple Movement” to go to Al-Aqsa on the day Palestinians were celebrating Eid al-Adha.

Abunimah added that on Jewish holidays, Israel imposes a total closure on the occupied West Bank and the Gaza Strip, banning millions of Palestinians from moving about, entering Jerusalem or visiting their holy site, “supposedly in order to protect Jews during religious holidays”.

“But on Eid al-Adha, Israel has done the opposite which is to allow religious extremists to go to Al-Aqsa for the purpose of provoking Muslims and I think that has to be very clear because these aren’t just pious Jewish worshippers who want to go and pray at the holy site,” Abunimah said.

“These are organised provocations from the Temple Movement, which is funded by the Israeli government, and whose explicitly stated goal is the destruction of the Al Aqsa mosque and its replacement with the Jewish temple.”

Jordan, the site’s custodian and one of only two Arab countries with a peace treaty with Israel, condemned Israel’s “continuous violations” there.

“The storming of Al-Aqsa Mosque compound by Israeli occupation forces this Eid morning is an act of recklessness and aggression,” she said in a statement.

The compound is situated in a part of East Jerusalem occupied by Israel in the 1967 Middle East war in a move that has not won international recognition. 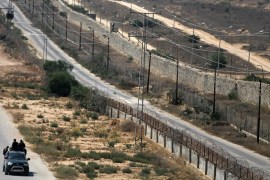 Military said the four men were heavily armed and one crossed into Israel. 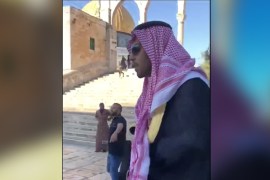 Mohammed Saud was part of an Arab delegation hosted by the Israeli foreign ministry, the first visit of its kind.