Buenos Aires, Argentina – Andrea Soria will step into the ballot box on Sunday in the first test of Argentina‘s all-consuming election season – and she is not happy about it.

“I think I’m like most people. I don’t want what we have right now, but I don’t want what’s even worse either,” said Soria as she waited for a bus in the Buenos Aires neighbourhood of Chacarita.

The single mother of a 13-year-old girl voted for incumbent President Mauricio Macri in 2015, only to see his promises to revive a faltering economy result in a financial crisis, with soaring inflation, unemployment, and sweeping spending cuts.

Soria lost her secretarial job at a law firm and now barely makes ends meet as a therapeutic assistant and house-cleaner.

But the idea of voting for the opposition politician Alberto Fernandez and the previous populist president Cristina Fernandez de Kirchner makes her cringe.

Sunday’s presidential primaries are an important litmus test in Argentina, which will hold its election on October 27.

A number of opinion polls predicted a close fight between Macri and Fernandez.

Since voting is mandatory for citizens over the age of 18 (people over 70 can opt out and anyone between 16-18 will not get penalised if they do not vote), they may act as a harbinger of things to come, or force campaigns to switch tactics.

Failing that, voters will go back to the polls for a runoff in November.

Argentines will also be voting to fill half the seats in the lower house of Congress, known as the Chamber of Deputies, and one-third of the Senate seats.

The powerful province of Buenos Aires, which accounts for about 40 percent of registered voters, will also elect provincial and municipal legislators.

But it is the presidential race that will command all the attention, inside and outside Argentina, which has a population of about 44 million and is the second-largest economy in South America.

The pro-market Macri, who slashed electricity, natural gas and transportation subsidies upon taking office, has pleaded with Argentines to stick with him, noting that change “takes time”.

Fernandez, who is not related to his running mate and is considered more of a centrist, has blasted a $57bn bailout deal Macri struck with the International Monetary Fund (IMF), which he wants to rework.

“The only thing they’ve produced is poverty,” Fernandez said during a campaign stop in the province of Cordoba.

Although she is running for vice president, Fernandez de Kirchner remains a key figure at the polls, acting as both a magnet for her die-hard loyalists, who remember the prosperous and heavily-subsidised Kirchner years, and repelling those who consider her reign synonymous with corruption.

Kirchner left office with the economy in trouble and is herself facing charges of corruption, which she denies.

Virtually all polls have put Fernandez ahead, although political scientist Ignacio Labaqui says Argentine opinion surveys could be wrong since most pollsters do not reveal who they work for.

If inflation remains on a decline as it has been in the last three or four months, “this would increase Macri’s chances,” said Labaqui, a professor at the Catholic University of Argentina.

If the polls are right and Fernandez comes out in front, political consultant Ricardo Rouvier expects Macri to turn more to the politics of fear that marked the Kirchner era.

“This is a very polarised election,” said Rouvier. “Defining the other side like the enemy, that’s been happening for years in Argentina. Both the opposition and the government are responsible for that rift.”

That tactic will not work on voters such as Enrique Eduardo Jara Perez, who survives off collecting and selling recyclable paper in the capital city.

He used to sleep on the street, next to a police station, until Kirchner’s government conducted a census a few years ago and showed up the next day with food and blankets.

“She made mistakes, yes, but she really helped poor people a lot,” said Perez who carries his loyalty to Kirchner “in his heart”.

Eugenio Simonetti, a farmer, does not share that affinity. He expects “95 percent” of the agricultural sector to side with Macri.

“They are scared of the prospect of returning to the mistreatment during the Kirchner era,” said Simonetti.

Feminist lawyer Sabrina Cartabia says there are more political pairings that feature men and women running together, hoping that it would broaden this year’s political debate to include gender issues.

“I think we have to force them to talk about this stuff,” she said, adding that during the times of economic turmoil, it is the children, the elderly and the women who are most vulnerable. 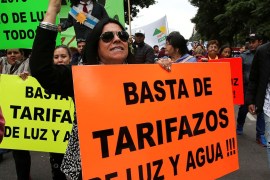