Srinagar and New Delhi – On the lawn of the district commissioner’s office in Srinagar, the main city of Indian-administered Kashmir, residents circle around a table, hoping their turn will come soon.

With phone and internet usage cut off during a week-long lockdown imposed by the Indian government, authorities are allowing locals to use a mobile phone to briefly speak to their loved ones outside the Muslim-majority state.

After several attempts, the line finally got through for two parents trying to reach their son in Nepal – at first, there were screams, followed by laughter before the conversation got going.

“We are all right. Your dad is with me. Don’t come to Kashmir,” were the first few words uttered by the mother.

Her husband almost instantly snatched the mobile phone: “Don’t come to Kashmir, we will travel to Nepal to meet you after Eid,” he shouted, referring to the ongoing Muslim festival.

Amid tears, the conversation between the mother and the son went on for about a minute, before the phone was taken back to be used by the other waiting parents.

“I talked with him after five days,” said the mother of the shawl seller who travels frequently back and forth from Nepal. “We were all worried for his safety,” she told Al Jazeera on Friday.

When asked why they kept on repeating to their son not to travel to Kashmir, the answer was simple: “We don’t want our son to get killed.”

It also bifurcated the state into two federally administered territories – Jammu and Kashmir and Ladakh – to be ruled directly by New Delhi.

The far-reaching move raised tensions and prompted international calls for calm: nuclear-armed neighbours India and Pakistan have fought two of their three wars over the disputed territory of Kashmir, which both claim in full but administer separate portions of. A three-decade rebellion in the Indian-administered part of the territory has left tens of thousands dead.

In his first address to the nation after the move, Modi on Thursday said that Article 370 was being used as a tool to spread “terrorism” and that it was time for all Indians to work together to make Jammu and Kashmir violence-free.

However, Kashmiris believe that the move is aimed to change the region’s demography.

Article 370, which came into effect in 1949, allowed the state to have “limited autonomy” in certain areas and had prevented non-residents from buying any property in the disputed region.

Article 35A, which was introduced through a presidential order in 1954 and was also scrapped on Monday, permitted the local legislature in Indian-administered Kashmir to define permanent residents of the region.

Days before its announcement, Modi’s government sent thousands of additional troops to the disputed and heavily militarised region, and locking down the place under strict curfew and a complete communication blockade that involves landlines, mobile phones and internet usage.

Thousands of Kashmiris living outside the region have still not been able to speak to their families, while many wanting to go home to celebrate Eid al-Adha had to drop their plans.

“There is this anxious feeling in my heart that I should have been with my family this Eid,” Omair Bhat, a 24-year-old Kashmiri student based in New Delhi, told Al Jazeera.

After 132 hours since Bhat had last spoken to his family in Srinagar, he finally received a call on Saturday from his grandfather, Ghulam Rasool.

The 79-year-old, a retired police official, had managed to make the call from a senior police officer’s phone. He strictly advised his grandson not to come home for Eid.

On Saturday, Mohammad Aleem Syed, a law graduate from Kashmir unable to communicate with the family, filed a petition in the Supreme Court seeking information about his parents, whom he feared to be in detention.

Syed said in his plea that he had not received any information on his parents and brother in Kashmir since the night of August 4-5.

Jammu and Kashmir Governor Satya Pal Malik on Wednesday said that 100,000 Indian rupees ($1,408) has been given to each designated liaison officers for organising Eid festivities for students from the state who are studying elsewhere and are unable to come home amid the security clampdown.

However, Kashmiri students studying in Aligarh Muslim University in the state of Uttar Pradesh said Malik’s statement had a “political connotation” and was aimed at “rubbing salt” on their wounds.

Nahida Zargar, 30, who hails from south Kashmir’s Tral town and is doing her PhD from Central University of Gujarat, has not been able to speak to her parents for seven days.

“Because of the prevailing conditions and being from a … volatile part of Kashmir, I cancelled my tickets and decided not to go home,” she told Al Jazeera.

Zargar said not being able to speak to her family for a week was deeply disturbing.

“We don’t even know how our parents are [doing] there in Kashmir. What kind of Eid is this? How can we celebrate and be happy?” Zargar told Al Jazeera.

Imran Majid, who works in Patna, Bihar, near the border with Nepal, told Al Jazeera he had cancelled his tickets to go home to celebrate Eid with his family as it was difficult to travel from the airport to southern Kashmir’s Anantnag district.

“We don’t know anything about the situation there. What we hear in the news floating in the international media is about a few areas of Srinagar only. The other parts of Kashmir are cut off, and no news is coming out from there. So it seems to be very risky,” Majid said.

On Thursday afternoon, Majid received a call from his father from a police station. The call, which barely lasted 30 seconds, was to confirm whether he was coming home for Eid.

“If you want to come, then try late in the evening,” Majid’s father had told him.

“But he seemed to be saying it very heavy-heartedly,” Majid said. “He seemed to be scared and worried about something which he couldn’t mention because there was someone continuously asking him to cut the call quickly. Then the call was cut without concluding it.”

Majid said that the feeling of his parents celebrating Eid “under siege is disheartening and very painful”.

“This Eid would be just like any other day for us and not an occasion of celebration. Our whole population is under siege. It is harrowing to see our people facing this brutal act by the administration and government of India. We are worried about losing more people to this conflict now,” Majid added.

Back at the district commissioner’s office in Srinagar, hundreds of people queued to register their names on a sheet of paper and wait for their turn.

Many had come to just put down their names, planning to return the next day to speak to their family members.

Among them were relatives of people who headed to Saudi Arabia for the annual Hajj pilgrimage.

On Tuesday, one of these pilgrims from Srinagar died in Medina. His family heard the sad news a day after he was buried.

“We only regret that we could not talk to him one last time,” one of the relatives told Al Jazeera.

“I had talked with him on August 3 around afternoon. I didn’t know that it would be our last conversation.” 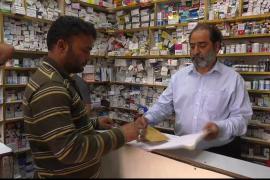 Telephone and internet connections are still severed in Indian-administered part of the region after India revoked its autonomy. 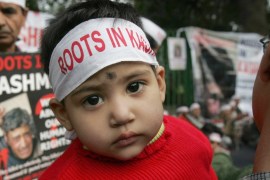 Kashmiri Pandits must reimagine the idea of return to Kashmir

The return of the Kashmiri Hindu population which fled in the 1990s should not turn into a colonisation of Kashmir.