Israeli Prime Minister Benjamin Netanyahu has made a thinly veiled threat to regional rival Iran, a day after Tehran announced it had started enriching uranium beyond the limit set by a landmark nuclear agreement and plunged the future of the imperilled accord into deeper doubt.

Standing in front of an F-35 stealth fighter during a tour of an Israeli airbase on Tuesday, Netanyahu said Iran had “recently been threatening the destruction of Israel” and “ought to remember that these planes can reach every place in the Middle East, including Iran and, certainly, Syria”.

Netanyahu has been a vocal critic of the nuclear deal struck by several world powers and Iran in 2015, formally known as the Joint Comprehensive Plan of Action (JCPOA).

Under the agreement, Iran agreed to scale back its nuclear programme in exchange for the lifting of economic sanctions.

But US President Donald Trump‘s unilateral withdrawal from the agreement a year ago has raised the spectre of it falling apart altogether, with Tehran threatening to keep reducing its commitments to the deal unless the remaining signatories – the UK, France, Germany, China and Russia – take action to shield Iran’s faltering economy from US sanctions imposed in the wake of its pullout.

On Monday, Iran announced it had enriched uranium beyond the 3.67 percent purity that the deal allows, passing 4.5 percent.

It marked the second time in a week that the Islamic Republic made good on pledges to reduce compliance having earlier exceeded the uranium stockpile limit permitted by the accord on July 1.

Tehran argued that its steps were permitted under the deal as a response to the US non-compliance. It also warned it could take new steps in 60 days, including restarting dismantled centrifuges and purifiying uranium to a sharply higher threshold.

In response to the moves, China and Russia both expressed regret but suggested the US had pushed Iran into a corner.

However, the European signatories on Tuesday took their first step towards punishing Iran for breaking the nuclear agreement, triggering the deal’s mechanism to resolve breaches.

The foreign ministers of Britain, France and Germany, plus the foreign affairs chief of the European Union, said in a statement that Iran was “pursuing activities inconsistent with its commitments” under the deal.

“These compliance issues must be addressed within the framework of the JCPOA, and a Joint Commission should be convened urgently,” they said, without specifying when.

Convening a joint commission of signatories is the first step in a process foreseen in the agreement that could eventually lead to a “snapback”, bringing back the international sanctions lifted by the deal.

“Iran has stated that it wants to remain within the JCPOA. It must act accordingly by reversing these activities and returning to full JCPOA compliance without delay,” the European countries said.

An Elysee Palace official told The Associated Press news agency that adviser Emmanuel Bonne left for the Iranian capital on Tuesday, seeking ways to restart dialogue. The official wasn’t authorised to speak publicly on the matter and asked for anonymity.

Macron and Iranian President Hassan Rouhani agreed in a weekend conversation to set a July 15 deadline to solve the current impasse.

The nuclear diplomacy is a central issue in a wider confrontation between the United States and Iran, which has escalated since the start of May when Washington further tightened sanctions with the aim of halting all Iranian oil exports.

The dispute took on a military dimension, with Washington accusing Tehran of attacks on ships in the Gulf. Last month, Iran shot down a US drone, after which Trump said he ordered retaliatory air raids on Iran, only to cancel them at the last minute.

The European powers strongly disagreed with the Trump administration’s decision to abandon the nuclear deal, and have since found themselves caught in the middle, trying to persuade Iran to stick to it without receiving the promised benefits.

The Trump administration argued that the deal agreed under his predecessor Barack Obama was too weak because some of its terms were not permanent and it omitted non-nuclear issues, such as Iran’s ballistic missile programme and regional policies.

Trump’s hardline policy is backed by oil-exporting Arab states in the Gulf, which consider Iran a foe and stand to gain from US sanctions that have removed Iranian crude from the market, and by Israel, which has repeatedly called on the European countries to reimpose sanctions.

On Tuesday, in the latest escalation of the war of words between Washington and Tehran, Trump accused Iran of doing “a lot of bad things” and suggested it had “better be very careful”.

The US leader’s comments came before he met Qatari Emir Sheikh Tamim bin Hamad Al Thani at the White House, where they discussed regional security in the Gulf and mutual economic ties, among other issues. 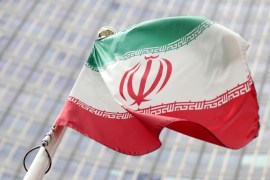 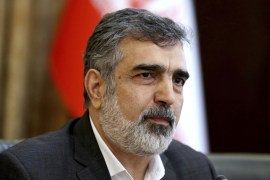 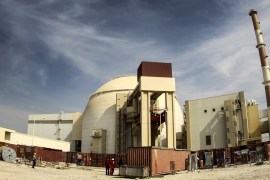