Donald Trump, the president of the United States, has warned Iran it “better be careful” after Tehran announced it would begin enriching uranium beyond a limit set in an international nuclear accord.

Trump last year unilaterally abandoned the 2015 deal and reinstated punishing sanctions on Iran, prompting it to announce in May a phased reduction of compliance with the landmark pact.

On Sunday, Iran said it was hours away from passing the 3.67 percent uranium enrichment cap set in the deal, and threatened to keep reducing its commitments every 60 days unless the remaining signatories to the accord  – United Kingdom, Germany, France, Russia and China – protected it from US sanctions.

It had already surpassed the uranium stockpile limit set in the accord on July 1.

When asked about the latest Iranian moves, Trump said on Sunday: “Iran better be careful because you enrich for one reason, and I won’t tell you what that reason is, but it’s no good.”

He did not elaborate on what actions Washington might consider, but told reporters that Tehran “will never have a nuclear weapon”. Iran denies seeking nuclear weapons and refers to a religious decree issued in the early 2000s by Supreme Leader Ali Hosseini Khamenei that forbids “the production, stockpiling and use of weapons of mass destruction, and specifically nuclear arms”.

In a Twitter post, he said: “Iran’s latest expansion of its nuclear programme will lead to further isolation and sanctions.”

He added: “Nations should restore the long-standing standard of no enrichment for Iran’s nuclear programme. Iran’s regime, armed with nuclear weapons, would pose an even greater danger to the world.”

Iran’s latest expansion of its nuclear program will lead to further isolation and sanctions. Nations should restore the longstanding standard of no enrichment for Iran’s nuclear program. Iran’s regime, armed with nuclear weapons, would pose an even greater danger to the world.

The multilateral pact saw Iran accept drastic limits on its nuclear programme and to submit to International Atomic Energy Agency (IAEA) inspections in exchange for a partial lifting of crippling international sanctions.

But Trump’s withdrawal from the deal on May 8, 2018 – and subsequent sanctions – have deprived Iran of the economic benefits it expected and dealt an additional blow on its economy.

European states, which have opposed the US move, have struggled to respond.

Iran has announced it will begin enriching uranium beyond the limit
set in its 2015 nuclear deal with world powers – "in a few hours."

He has previously stressed Iran was not violating the deal, citing terms of the agreement allowing one side to temporarily abandon some of its commitments if it deems the other side was not respecting its side of the accord.

Meanwhile, the European Union said parties to the deal were discussing a possible emergency meeting after Iran’s announcement, with spokeswoman Maja Kocijancic saying the bloc was “extremely concerned” about the move.

Britain warned Iran to “immediately stop and reverse all activities” violating the deal, while Germany said it was “extremely concerned”. Japan also expressed worry, urging Iran to “immediately return to its commitment under the agreement and avoid any further steps that would undermine” the deal. 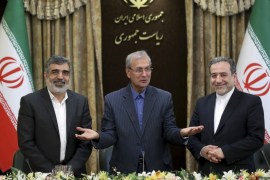 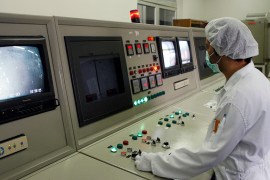 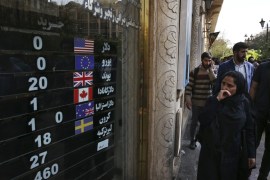