Russia‘s ban on flights to neighbouring Georgia has come into effect, posing a serious economic challenge for the Caucasus nation of 3.7 million people, which annually hosts more than one million Russian tourists.

The travel blockade, which affects all Russian and Georgian airlines operating between the two countries, was activated on Monday, in the middle of the high tourist season and about two weeks since it was announced in response to anti-Kremlin protests in Tbilisi.

The demonstrations were rooted in anger at a visit of a Russian legislator, Sergei Gavrilov, who gave an address from the Georgian parliamentary speaker’s chair.

Along with the ban, Moscow imposed tight controls on Georgian wine imports, recommended travel companies to stop selling holiday packages to Georgia and advised Russian tourists visiting the country to return home, claiming that “Russophobic hysteria” made the country dangerous for citizens.

Ghia Nodia, political analyst in Tbilisi, told Al Jazeera that the move was completely inadequate as Russian tourists were not in “any danger at all”, saying Moscow wanted to impose a sanction over the protests and used the security pretext as an excuse.

“It thinks that it is a painful punishment. In Russia, it’s a prevalent idea that Russian tourists are a very important source of income for the Georgian economy. It might be a certain challenge, but I don’t think that it is a very hard one,” said Nodia.

He said it was still unclear how effective the measure would be because Russian tourists could still reach Georgia via indirect flights and by land.

“Moscow might be hoping that a certain part of the Georgian society will go against the [anti-Kremlin] demonstrators, blaming them for the loss of a source of income. Maybe they are after prompting the cultivation of pro-Russian sentiments this way, but I don’t think this hope will come to fruition,” he added.

The Kremlin’s retaliation is expected to shave at least $141m off Georgia’s $3.5bn tourism revenue, as tourist numbers drop 25 percent, based on the 2018 data of the World Travel and Tourism Council (WTTC).

According to the data, the tourism sector contributed 33.7 percent to Georgia’s total gross domestic product (GDP) and employed more than 500,000 people last year, representing 23 percent of jobs in the country.

The Georgian public and authorities met the development with defiance and optimism.

Natia Turnava, Georgia’s economy minister, said at a news conference that the embargo would certainly hurt the country, but the situation was possible to withstand.

“We see that [some] Russian tourists are still keen to visit our country. We are a peaceful country, an open tourist market. We welcome tourists from all counties, including the Russian tourists, who despite the recent complications consider visiting Georgia again,” she said. “There will be difficulties but I hope that this problem will be resolved and sorted out.”

Meanwhile, Georgians protesting against Gavrilov’s visit and social media users called for efforts to diversify the tourism sector to reduce the dependence on Russian tourists.

“This will hit the Georgian tourism industry a lot and I think this is a perfect time for Georgian hotels, tour operators and restaurants to look towards the West, East, South and any other direction,” said Mirian Jugheli, a communications specialist who joined a social media initiative calling for marketing Georgia as a destination among the international community.

Will Cathcart, another participant of the #SpendSummerInGeorgia campaign, urged “drinkers, hikers and beachgoers” from all over the world to travel to the country “to spite Russian President Vladimir Putin” by helping Georgians overcome the economic blow.

Irakli Sakhamberidze, general director and founder of Travel In European Union travel agency, told Al Jazeera he wanted the Georgian government to focus on establishing a direct air link from the US, as well as fast-track the entrance of Irish budget airline Ryanair to attract more European travellers.

“An army of tourists await direct flights from the US. [From] Israel, which urged its citizens to visit Georgia, we don’t have cheap flights.

“The entrance of Ryanair is also running late. If we eradicate these problems, we can substitute the 1.4 million Russian tourists very easily,” said Sakhamberidze, whose agency mostly deals with tourists from Germany, Poland and other European countries.

He believes that working on the Russian tourist market was “a dangerous activity, almost like a crime”.

“Russian spies come here under the guise of tourists and servicing them equals becoming an accomplice.

“I saw it on TV that one of the Russian agents involved in the Skripal case visited Georgia about three years ago. He hired some tour guide and God knows what kind of information he gathered through him,” Sakhamberidze said, referring to the 2018 attack on former Russian double agent Sergei Skripal and his daughter, Yulia, in the UK.

Anti-Moscow sentiment runs high in Georgia as Russian troops occupy about 20 percent of Georgian territory, including breakaway regions of South Ossetia and Abkhazia, since the break-up of the Soviet Union in the 1990s.

In 2008, Russia and Georgia fought a brief but bloody war over South Ossetia. Following the conflict, Russia recognised the independence of both separatist regions.

The latest embargo echoed restrictions that Russia enacted in 2006 as tensions rose between the countries, leading up to the five-day August war in 2008.

The flights were restored in 2010 and Russia lifted the wine imports ban in 2013. 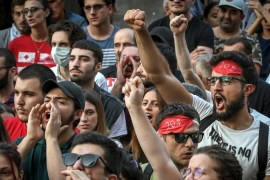 Georgians rally for justice over crackdown on anti-Russia protest 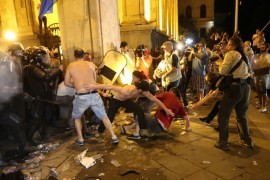 Violent clashes erupt between protesters and police as thousands demonstrate outside legislative assembly in Tbilisi.