The United Nations says it has information that Libyan guards opened fire on migrants and refugees trying to flee air raids that killed at least 60 people and wounded 77 others at a detention centre near the capital, Tripoli.

But security guards at the bombed-out facility interviewed by Al Jazeera denied the accusations on Thursday.

Two attacks hit an unoccupied garage and a hangar holding about 120 people in the centre in Tajoura, east of Tripoli, late on Tuesday, a report from the UN Office for Coordination of Humanitarian Affairs (OCHA) said.

“There are reports that following the first impact, some refugees and migrants were fired upon by guards as they tried to escape,” it said.

Bodies were still being recovered from the rubble, the report added, suggesting the death toll from the unclaimed air raids could rise. At least six children were among those killed.

About 500 people are still being held at the Tajoura detention centre, with four Nigerians set for release to the Nigerian embassy on Thursday and a plan for 31 women and children to be sent to the UN refugee agency’s departures facility in Tripoli.

Libya is one of the main departure points for African migrants and refugees fleeing poverty and war to reach Europe by boat, but many are intercepted at sea and brought back by the Libyan coastguard – with the approval of the European Union.

Al Jazeera’s Mahmoud Abdelwahed, reporting from the detention centre, said guards at the facility refuted the claims made in the UN’s report.

“Supervisors here said we are not allowed to speak to the migrants because they have been hearing so many stories made up by them … so that humanitarian organisations can come and take them to Europe,” Abdelwahed said.

The Tripoli-based interior ministry also denied the allegations categorically in a statement.

One person held at the facility told The Associated Press it was unclear if the guards fired at the migrants or in the air.

Others told the AP that they were conscripted by a local militia to work in a weapons workshop inside the detention centre, alleging they were sent day and night to toil in the adjacent facility.

They requested their names and nationalities not be published, fearing reprisal.

“We clean the anti-aircraft guns. I saw a large amount of rockets and missiles, too,” said one person held for nearly two years.

Abdelwahed said the guards denied any weapons or ammunition were stored on the site, however.

“We know that this detention centre is not far from unused military camps, but it is not close to any ammunition depots and is far from the front line,” he added.

Haftar’s Libyan National Army (LNA) denied the accusations, saying it targeted a nearby militia’s position but did not attack the hangar where the migrants were being held.

The LNA in April launched an offensive to capture Tripoli from the GNA, which is supported by an array of armed groups.

The 60 killed in the bombing of the detention facility marked the highest reported death toll from an aerial bombardment or shelling since Haftar’s forces launched their offensive.

“The number of civilian casualties caused by the conflict has almost doubled as the result of this single attack,” the OCHA report said.

Interior Minister Fathi Ali Bashagha said the Tripoli government was considering closing all detention centres for migrants and releasing them.

‘This hell of Libya’

Despite the international outrage following the air raids, aid groups said there were no plans to evacuate the migrants, however, and nowhere in Tripoli is safe.

“We are not aware of plans to relocate the migrants that remain in Tajoura,” said Safa Mshli, a spokeswoman for the International Organization of Migration.

“Migrants intercepted or rescued at sea should not be returned to Libya, where they will face the same inhumane conditions,” Mshli added.

An estimated 6,000 migrants and refugees are held in detention centres across Libya, despite the UN repeatedly warning the sprawling North African country is not a safe place for them and calling for their release.

One of the migrants recounted a nearly two-year odyssey in which he fled war in his native country and was passed from one trafficker to another until he reached the Libyan coast.

He boarded a boat that was intercepted by the coastguard, which later transferred him to Tajoura, where he was wounded in Tuesday’s bombings.

“I fled from the war to come to this hell of Libya,” he said. “My days are dark.” 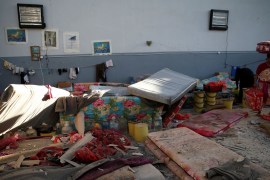 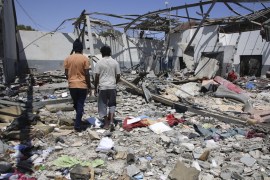 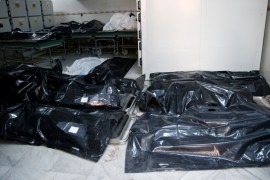 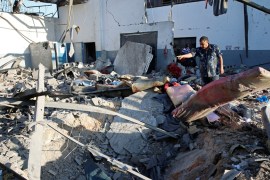