The North Korean mission to the United Nations said the letter sent to all UN member-states showed that the US is “practically more and more hell-bent on the hostile acts” against North Korea, even though it is seeking dialogue.

The mission said the letter from the US, along with Britain, France and Germany, was sent on June 29, the day Trump tweeted that he would like to shake Kim’s hand and say hello during his visit to the demilitarised zone on the Korean Peninsula.

Andrei Lankov, an expert on North Korea at Kookmin University in Seoul, told Al Jazeera that the comments from North Korea were not unexpected.

“We are going to see a great deal of mutual accusations, which will be a kind of noisy background for the working-level talks that are just about to begin,” he said.

“It’s part of, if you like, a diplomatic game, to put pressure on the Americans to make sure (they) will not drag their feet and deliver some proposal as soon as possible because North Korea is under some pressure from the sanctions.”

When Trump met Kim on Sunday at the DMZ, he became the first US president to step onto North Korean soil. Afterwards, he said the two leaders agreed to start working-level talks on a denuclearisation deal, ending a standstill.

“What can’t be overlooked is the fact that this joint letter game was carried out by the permanent mission of the United States to the UN under the instruction of the State Department, on the very same day when President Trump proposed (for) the summit meeting,” said a press statement from the North Korean mission.

The US letter was in fact sent on June 27 and called on all countries to apply sanctions provisions that call for the return of all North Korean workers by the end of 2019.

UN experts estimate that tens of thousands of North Koreans are sent abroad every year, mostly to China and Russia, working in slave-like conditions to generate hard currency revenue for Pyongyang.

“We do not thirst for lifting of sanctions,” the North Korean mission said, adding that it was “quite ridiculous” for the US to consider sanctions as a “panacea for all problems.”

UN sanctions resolutions have banned all new contracts with North Korean workers and states all countries with existing workers will send them back by the end of 2019.

The UN Security Council has adopted a series of sanctions in response to the North’s ballistic missile and nuclear tests.

In the letter, the four countries noted that only 34 countries had filed reports to the UN on whether action was taken to send North Korean workers back.

The final deadline for repatriating North Korean workers is December 22, according to the letter seen by AFP. 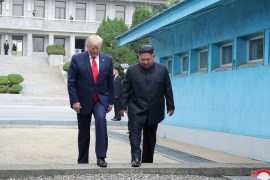 There is extensive coverage of impromptu meeting in North Korea’s state media, but analysts question its significance. 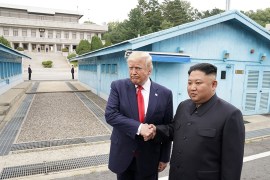 US president and North Korean leader each step over border at Demilitarized Zone, in landmark meeting.