The Philippines was the deadliest country in the world for environmental and land activists in 2018 with at least 30 recorded deaths, according to a watchdog group.

In a report published on Tuesday, Global Witness said 18 percent of the 164 environment-related deaths recorded last year took place in the Philippines.

It is the first time the Philippines has topped the list since the organisation began documenting killings linked to the environment and land protection.

In an average week last year, three people were killed while defending their land and the environment from industries such as mining, logging and agribusiness, the report said.

Among those killed in the Philippines last year were nine farmers working at a colonial-era sugarcane plantation in the central island of Negros.

The fatalities in the October 2018 incident included four women and two minors.

A month later, the farmers’ lawyer, Benjamin Ramos, was also killed after receiving numerous death threats. He was the 34th lawyer killed since President Rodrigo Duterte came to power in 2016.

The death toll has continued to mount with 14 more farmers from Negros island killed in March 2019.

Duterte’s spokesman has called the incident a “legitimate” police operation, although human rights groups described it as a “massacre”.

Countless more people have been silenced through other tactics designed to crush the protest, including arrests, death threats, lawsuits and smear campaigns, Global Witness said.

“Vicious attacks against land and environmental defenders are still happening, despite growing momentum behind environmental movements the world over,” Alice Harrison, senior campaigner at Global Witness, said in a statement.

“It is a brutal irony that while judicial systems routinely allow the killers of defenders to walk free, they are also being used to brand the activists themselves as terrorists, spies or dangerous criminals.”

Because of her work defending indigenous people in the Philippines, UN Special Rapporteur Victoria Tauli-Corpuz was also declared a “terrorist” by the administration of Duterte.

“This was in retaliation for me speaking out against indigenous rights violations in my home country. For months, I lived under threat, and could not safely return home,” she said.

In September 2018 in the southern Philippine island of Mindanao, a 23-year-old indigenous man was allegedly killed by soldiers, after he was accused of being a supporter of a communist rebel group.

The military has also accused communist rebels of carrying out attacks on indigenous people.

Rights groups say Duterte’s deadly war on drugs, which claimed thousands of lives, has created a culture of impunity in the country.

The Global Witness report said much of the persecution of land and environmental defenders is being driven by demand for the land and raw materials needed for products that consumers utilise every day, from food to mobile phones and jewellery.

Also recording a high number of environment and land-related fatalities were Colombia with 24 deaths, India with 23, and Brazil at 20.

Meanwhile, in Guatemala, a boom in private and foreign investment has seen large swaths of land handed out to plantation, mining and hydropower companies, ushering in a wave of forced and violent evictions, particularly in indigenous areas, the report said.

This has stirred fears of a return to the large-scale violence the country suffered 30 years ago.

The report said Guatemala saw the sharpest increase in the percentage of murders with a five-fold rise. At least 16 people defending their land and the environment were killed there in 2018. 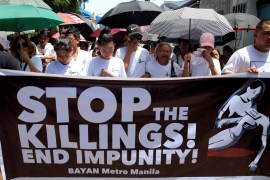