Hong Kong, China – Kenneth Yeung was stunned to see Hong Kong police club protesters and fire rubber-coated bullets at the crowd of young people – mostly armed only with umbrellas – at a protest outside the city’s legislature last month, especially since he had once been on the other side.

“When I was trained to use the baton, I was never told to hit someone in the head,” said Yeung, 32, who was a police inspector for two years. “We were taught to use force just one level higher than what we faced.”

As hundreds of thousands have taken to the streets in a series of demonstrations against a controversial extradition bill over the last few weeks, the police have ended up in confrontations with the demonstrators, leading to battles in the streets and skirmishes inside shopping malls and metro stations.

In the process relations have soured, with the force the target of accusations of brutality and collusion with gang elements, undermining trust already shaken during pro-democracy Umbrella Movement of 2014.

“Now, more and more young people have their first brush with law enforcement at protests, this doesn’t bode well for the public’s relation with the force,” said Lawrence Ho, a social scientist who specialises in policing at the Education University of Hong Kong.

“Even though the force has always been a political tool, the ongoing political crisis isn’t one for it to resolve. People have lost faith in the government and their deep-seated distrust has spilled over into scapegoating the police.”

Founded in 1844 as the Royal Hong Kong Police, a force once notorious for its street toughs and shakedown artists, the agency developed a more professional reputation after a crackdown on corruption in the late 1970s.

In the decades that followed, police dramas became hugely popular on television and in films with the cops usually playing the good guys who nabbed the bad ones and put criminals behind bars.

Known for its low crime rate, the city has a heavy police presence with some 30,000 personnel for a population of 7.4 million, nearly three times more than that of Singapore’s – which is also famously safe.

A one-time British colony and,a semi-autonomous region of China since 1977, Hong Kong does not have its own military, so the police often serves as a paramilitary force.

“We should ask if the police is over-militarised,” said Gary Fong, a researcher at The Chinese University of Hong Kong, who has studied the force’s militarisation after riots in 1956 where 59 people died. These were sparked by pro-nationalist and pro-Communist rivalry. 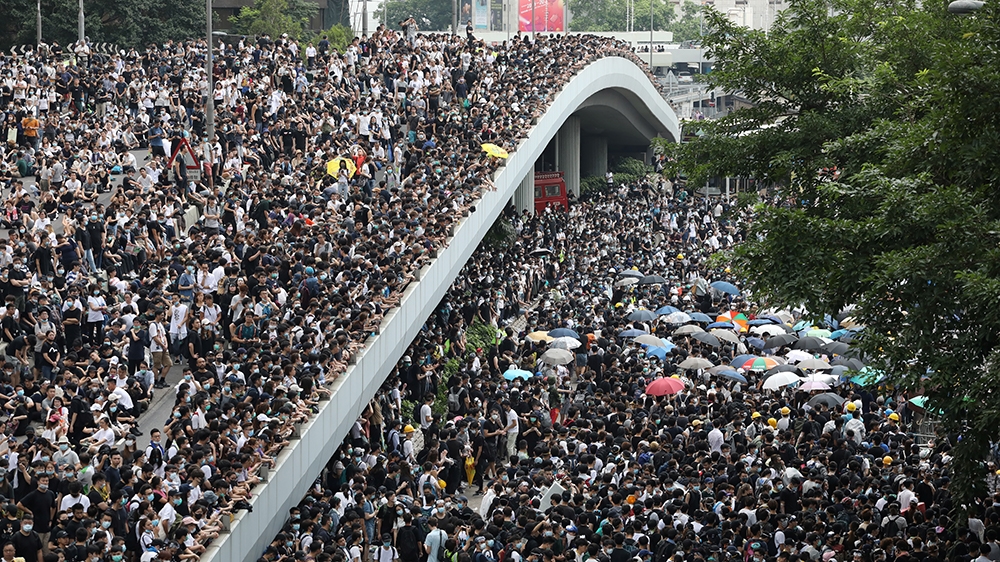 “Each emergency unit wagon now has the full complement of anti-riot equipment, which allows officers to deploy significant force on the civilians. One wonders if it’s necessary,” Fong added.

The riot squad, known as the Police Tactical Unit, was founded in the wake of the 1956 riots, but since 1995, all police officers have received anti-riot training.

On the front lines, they wear helmets and carry shields – donning gas masks for the times they use tear gas. Other so-called “non-lethal” ammunition includes beanbag rounds and rubber-coated bullets.

Over the past decade, corps of constables have also trained at the People’s Public Security University in Beijing but little is known about their training.

On Monday, police chief Stephen Lo wrote a letter to the members of the force praising them for their handling of the protests, the South China Morning Post reported.

“I will always stand by you,” he told them.

Some police veterans argue their colleagues have been assigned a mission impossible.

“It’s a political crisis that has gone into chaos mode: should the police be allowed to stand by? Some of [the protesters] were out spoiling for a fight with the police,” said James Arthur Elms, who as a former senior superintendent with the Royal Hong Kong Police, helped suppress the 1956 riot. 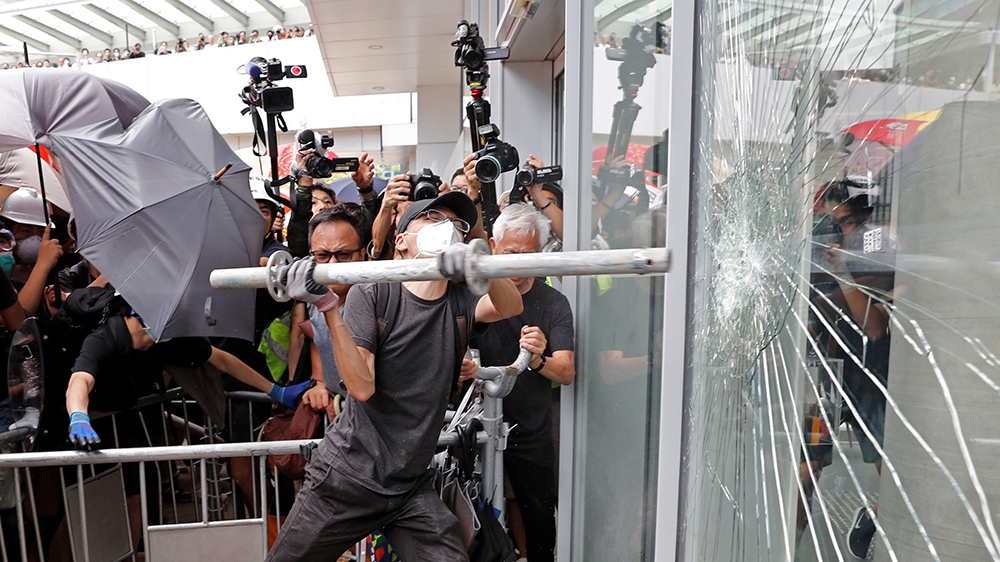 Protesters try to break into the Legislative Council building during the anniversary of Hong Kong’s handover to China on July 1, 2019. [Tyrone Siu/Reuters]

While Hong Kong enjoys rights and freedoms unheard of on mainland China, the Public Order Ordinance, a colonial-era law that was tightened with the handover requires any march involving more than 30 people or gathering of at least 50 people to have police approval.

Police can attach conditions to any permit given, including bans on certain types of banners or flags. Permission is sometimes given at the last minute and those who go ahead without it risk prosecution.

As a result, protesters often see the force as enforcing restrictive laws designed to keep a lid on discontent. The Commissioner of Police, who heads the force, is appointed by the authorities in Beijing.

The Independent Police Complaints Council (IPCC) was established in 2009 with powers to “observe, monitor and review” the way in which the force handles complaints. Since the protests against the extradition bill began, there have been 325 complaints against the police, including assault and misconduct, according to the IPCC website.

Authorities so far have rejected calls for an independent inquiry led by a judge into the alleged use of excessive force and other complaints relating to the recent wave of protests.

At Sunday’s rally, demonstrators demanded that the police be made accountable for firing 36 shots, including sponge-tipped bullets at a protest the week before.

So far, about three dozen protesters have been hospitalised, with around a dozen officers reporting injuries.

“There’s no civilian oversight, coupled with the lack of political accountability – that’s the recipe for disaster,” said Fong, the researcher.

Since the end of colonial rule, Hong Kong’s leaders have maintained strong working relationships with the police. Two out of the last three chief executives were sons of policemen and grew up in staff quarters.

Amid the violence of the past few weeks, embattled incumbent Carrie Lam has shown her support for the force.

Two weeks ago, she visited injured officers in hospital and vowed to resist calls for any third-party investigation into police conduct.

As for Yeung, nearly a decade after he left the force once dubbed “Asia’s Finest” he has no regrets.