The Nigerian government has banned a Shia group after a spate of deadly clashes at protests in the capital Abuja, and following a court decision allowing authorities to call it a “terrorist” organisation.

The office of President Muhammadu Buhari said in a statement on Sunday that the government “had to act” against the Islamic Movement of Nigeria (IMN), before the situation got out of control.

Tensions have risen between the authorities and IMN as demonstrations in Abuja to free pro-Iranian leader Ibrahim Zakzaky have descended into violence.

On Monday, a court in Kaduna State will decide on Zakzaky’s application for bail to seek medical treatment abroad.

Punch newspaper reported on Saturday the government had secured a court order allowing it to prohibit the group’s activities as “terrorism and illegality”.

“Proscription of Islamic Movement of Nigeria (IMN) has nothing to do with banning the larger numbers of peaceful and law-abiding Shia in the country from practising their religion, instead it was to discourage wanton violence, murder and willful destruction of public and private property,” the presidency said in a statement.

“The banned organisation was taken over by extremists who didn’t believe in peaceful protests and instead employed violence and arson, driving fear and undermining the rights of others and constituted authority.”

The authorities still need to publish the court order in the state gazette and two newspapers for it to come into force, Punch said.

Last week, at least six protesters, a trainee journalist and a senior police officer were killed during the latest clashes.

The IMN, which emerged as a student movement in the late 1970s was inspired by the Islamic revolution in Iran, and has close ties in the Islamic republic.

The sect is often treated with hostility in Nigeria, especially in the predominantly Sunni Muslim north of the country, where religious elites are allied with Saudi Arabia.

Zakzaky was detained in December 2015 after violence during a religious procession. Rights groups say some 350 mostly unarmed Shia marchers were killed by the Nigerian army.

In recent months there have been almost daily marches by the IMN in the capital as concerns rise over Zakzaky’s health.

The IMN on Sunday condemned the move to ban it as a “dangerous development” and insisted it would push on with protests until its leader was freed.

The Nigerian police this week vowed to crack down on “violent protests” by the group, with a heavy security presence visible across the capital city.

Zakzaky and his wife Zeenah Ibrahim have been in custody despite the federal high court ordering his release in 2016.

The government refused and filed fresh criminal charges, including homicide that is punishable by death. 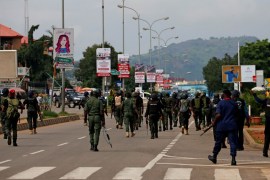 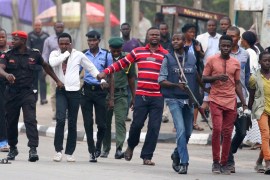