A high-level delegation from Myanmar is in Bangladesh’s southern Cox’s Bazar district to hold repatriation talks with Rohingya refugees.

The purpose of Saturday’s visit was “to talk with Rohingya refugees in order to convince them to return to their home country”, said Md Delwar Hossain, director general at Bangladesh’s Foreign Ministry.

The 15-member delegation from Nay Pyi Taw, led by the permanent secretary of Myanmar’s Foreign Ministry, Myint Thu, held a four-hour meeting with community leaders, including women, from the refugee community.

They took shelter in three dozen camps in Bangladesh’s Cox’s Bazar, pushing the number of Rohingya refugees in Bangladesh above 1.2 million. Many still fear for their safety if they return to Myanmar, where the Muslim minority has faced decades of repression.

On Saturday, hundreds of Rohingya gathered at the centre where the Myanmar delegation was meeting Rohingya leaders, but were dispersed by the Bangladeshi police.

“We came here to meet the Myanmar delegates to get some answers to our questions but we were not allowed to meet them,” Safari Alam, a Rohingya refugee, told Al Jazeera.

Al Jazeera’s Tanvir Chowdhury, reporting from the sprawling camp, said the Rohingya have several fundamental demands before they even consider moving back to Myanmar.

“One is to be recognised as ethnic Rohingya, get citizenship, and have a guarantee of security by the international community,” he said. “What the Myanmar delegates will achieve we have yet to see, but from the rights groups and others we know the environment is not conducive for them to return yet.”

Khaled Hossain, another Rohingya refugee, told Al Jazeera: “If they recognise us as Rohingya and give us citizenship cards we’ll go back there in one second.”

Bangladesh and Myanmar signed a repatriation deal in November 2017, but so far virtually no Rohingya have volunteered to return. Bangladesh has said it will not force any Rohingya to leave.

Last November, a move to start the repatriation process fell through after none of the Rohingya agreed to return to Myanmar. It followed a visit to the camps in October last year by a Myanmar delegation.

Speaking to reporters in Dhaka on Wednesday, Bangladesh’s Foreign Minister AK Abdul Momen said he hoped the “repatriation will begin by September”.

Myanmar has faced international pressure to allow the Rohingya to return to Rakhine and grant them citizenship rights. The UN has complained that progress to address the refugee crisis has been far too slow.

Separately, an Australia-based think-tank said on Wednesday that Myanmar has made “minimal preparations” for the safe and dignified return of Rohingya refugees.

While authorities have promised to resettle the refugees, analysis of satellite imagery showed “no sign of reconstruction” in the overwhelming majority of their former settlements while, in some areas, destruction of residential buildings has continued, the Australian Strategic Policy Institute said in a report released late on Tuesday. 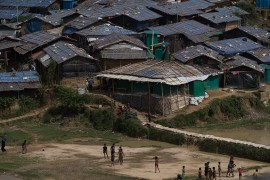 Rohingya crisis: One year on, do they want to return to Myanmar?

Al Jazeera spoke with Rohingya living in refugee camps in Cox’s Bazar about their thoughts on repatriation. 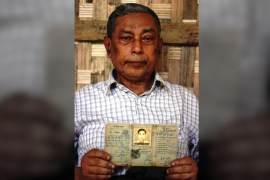 ‘Myanmar wants to drive out all Muslims’: Q&A with Kyaw Hla Aung

Leading lawyer speaks to Al Jazeera on plans for repatriation of Rohingya refugees and anti-Muslim sentiment in Myanmar.