Drass, located in Kargil district, has an additional claim to fame. In the summer of 1999, it was on its western edge with rocky and barren Himalayan peaks that India and Pakistan fought their last war.

That year, Pakistan’s military and Kashmiri rebels occupied strategic positions on the Indian side of the de facto border between them (known as the Line of Control or LoC), prompting a counteroffensive by India.

The Kargil war, as it came to be known, lasted for nearly three months, killed more than 500 Indian and nearly 400 Pakistani soldiers, and ended with India successfully pushing back Pakistani fighters to the other side of the LoC.

While Pakistan had named its move to take over the control of Indian posts along the LoC as Operation Badr, India called its offensive Operation Vijay.

It was a war fought in the era of satellite news channels. The battles were broadcast directly to homes in both the countries, making Drass a symbol of India’s nationalism, inspiring a raft of jingoistic Bollywood movies.

Every year since 1999, the Indian army has marked July 26 – the day the Kargil war ended – as “Vijay Diwas” (Victory Day), this week being its 20th anniversary.

With a Hindu nationalist government in place, the Indian army celebrated in style, and held commemorative treks to the mountain tops where the fiercest fighting had taken place.

On Thursday, Indian army chief General Bipin Rawat was in Kargil, where he warned Pakistan not to repeat a similar incursion “anytime, anywhere”.

“They [Pakistan] did not appreciate the will and the intent of the Indian political establishment and the Indian armed forces that they will never allow them to succeed,” he said.

“My warning to Pakistan [is]: do not ever repeat such misadventure anytime in the future anywhere. Do not think of it,” he said.

Until 1999, Indian and Pakistani soldiers manning the mountain-top posts had an unwritten winter armistice on the inhospitable Kargil frontier. Both sides abandoned front line posts during the harsh winters when temperatures plunged.

The Himalayan territory of Kashmir has been divided between Hindu-majority India and Muslim-majority Pakistan since the two countries gained independence from British rule in 1947.

Both India and Pakistan claim Kashmir in full, resulting in a 70-year standoff and turning the region into one of the world’s most militarised zones. 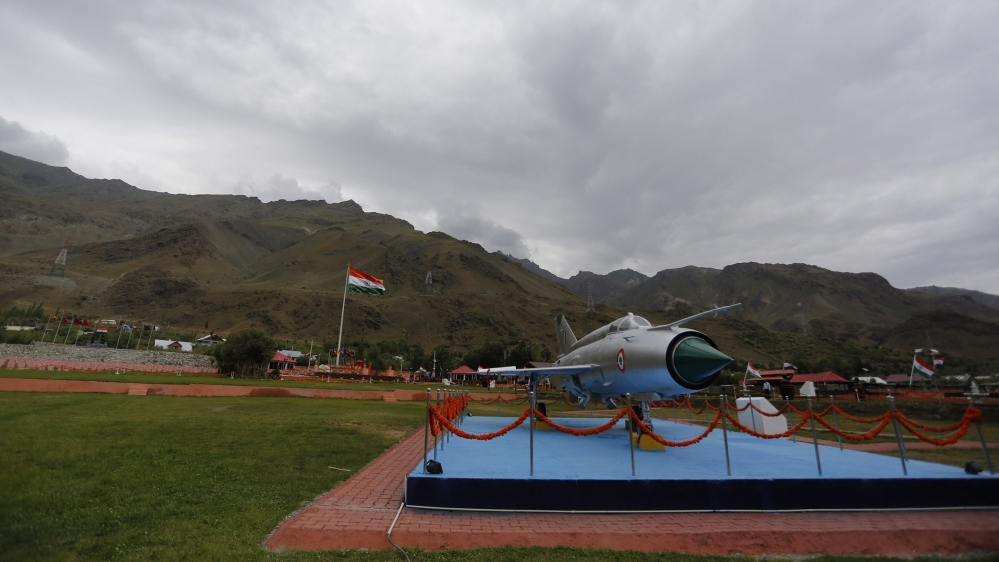 Drass, nearly 150km east of Kashmir’s main city, Srinagar, is separated from the Kashmir valley by the Himalayas. The people here are of Central Asian ancestry, speak in the regional languages of Balti and Dardic and live in much the same way as their forefathers did.

Mohammad Hussain had to flee with his family during the war and returned to find his house badly damaged by the shelling. He said a lot had changed since the war as the town now attracts tourists from across India and abroad.

“Earlier, very few people would come to this desolate place. Now, they come and some even stay for a night,” he said.

Hussain said the harsh living conditions in the region helped  heal the scars of the war quickly. “We are cut off from the world for six months every year when we live and die on our own. So, it’s not difficult to forget a war,” he said.

While Hussain may claim to have put the Kargil war to the back of his mind, the dispute continues to cast a long shadow on the two nuclear-armed neighbours’ ties, making the future of Kashmir uncertain.

The hostilities between the two nations sunk to a new low in February this year, when a Pakistan-based armed group, Jaish-e-Muhammad (JeM) carried out a suicide attack on an Indian military convoy in a southern town of India-administered Kashmir.

The Pulwama attack killed at least 40 Indian troops, triggered dogfights and air attacks inside each other’s territory, and brought India and Pakistan to the brink of another full-scale war.

Even as the threat of a war appears to have subsided since, tension between the two countries continues, freezing any dialogue.

Meanwhile, India-administered Kashmir has been in turmoil for the last three decades since an armed rebellion against the Indian rule erupted in the early 1990s.

In recent years, the almost daily confrontations between stone-throwing protesters and armed rebels on the one side, and the Indian security forces on the other has only worsened.

Security experts say not much has changed in Kashmir even after two decades of the Kargil war.

“Nothing really seems to be changing because the political situation in Kashmir has gone from bad to worse and nobody knows when the state elections are going to be held,” he said, referring to the federal rule imposed in the disputed region earlier this year.

The Kashmir unrest has been further compounded by New Delhi’s insistence on revoking the laws which protect the demographic structure of the only Muslim-majority region in the country.

“The chances of Kargil happening again are very remote, but the fact is that Kashmir continues to remain the fierce bone of contention between the two states and military action cannot be ruled out entirely,” Bedi said.

However, Islamabad-based analyst Zahid Hussain thinks a breakthrough between India and Pakistan is possible if they engage directly and not through third-party intervention as offered by US President Donald Trump this week.

“I don’t see progress immediately. It won’t happen soon,” he said, adding that “backchannel diplomacy” could help. He also said it’s not Kargil, but the 2008 Mumbai attacks that worsened India-Pakistan relations.

“Kashmir used to be open. I went to India-administered Kashmir myself. In 2008, Mumbai happened… [It was] the turning point,” he said.

Ajai Sahni, another New delhi-based defence and security analyst, told Al Jazeera that while military clashes between the two countries have been dialed back, “political mismanagement” may escalate the tensions.

“I am afraid we have not changed much between then [Kargil war] and now.”